Without much ado, let's get right into it...

So, the official git docs describe cherry-pick as the following:

Given one or more existing commits, apply the change each one introduces, recording a new commit for each.

So let us see what that means exactly...

But wait. You had to commit to the feature branch, but you committed to master 😱

What do you do in this case? Do you copy your code and paste it in the right branch and then commit again?

Now this is exactly why you need git cherry-pick. It allows you to "cherry-pick" commits from one branch and put them elsewhere (on another branch).

Now that you have an understanding of why you might need it, let's see how you can use it with a small example.

First, I'll cd to my Desktop and create a brand new folder called "learning" with this command:

Now let's initialize a new git repository in this new folder with the command git init:

OK, our git repository is ready. Let's create a new file now and commit the changes...

Now, let's create a new branch and add one commit there too: 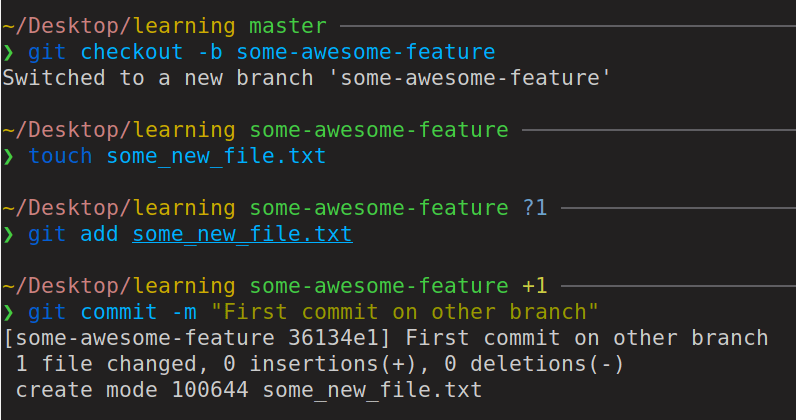 OK, now let's quickly check our git logs to see the commits we have currently. We'll use this command for each branch:

ℹ️ : -oneline will give us all info for each commit in a single line and --graph will make it look nice in a tree like format.

Now to simulate the error, we will make a commit to the master branch that should have been made to the some-awesome-feature branch.

First, checking the wrong branch (the master branch in this case), we see the commit that we want to pick and copy to the right branch.

Now, first to copy the commit over from master to the right branch, we need the commit hash of that commit.

If you look at the wrong branch carefully (the master branch in our case), the commit hash is 67d2e2f

This is important because we need to tell cherry-pick which commit has to be copied.

Now, to cherry-pick, we always git checkout to the right branch first. Let's do that with:

We can see that the commit we want here, isn't there.

Let's use the magic ✨ of cherry-pick, the one command you have been waiting for!

On the branch that we want the commit to be on, we'll run this:

As you saw earlier, the hash of the commit we want is 67d2e2f so we'll use that.

Let's check the git log for this branch again:

However, notice that the commit has a different hash here 😯. That's what we'll discuss in the final part of this post...

Keep this in mind

For the final time, let's check the commit logs for both the branches

=======
You can see that the commit we cherry-picked has not been moved from our wrong branch (the master branch in our case), but it has been copied.

This is what is called a "replay". Git did not move your commit but instead replayed the changes on the right branch, which is exactly why the commit has a different hash than the original one.

=======
You saw how the hash of the copied commit is different form the original, and this is why you should avoid using these commands if you've already pushed the changes to a remote repository (say GitHub for instance), because if you do, other collaborators on the project would have a different history than yours and this could mess a lot of things up.

Aaaand that's it from me! I thank you so much for reading through. You are awesome! 🥳

If you loved it, you can show some love on Twitter and / or leave your beautiful comments below.

Thinking Like a Hacker: Stealing Secrets with a Malicious GitHub Action

Once suspended, gitryder will not be able to comment or publish posts until their suspension is removed.

Once unsuspended, gitryder will be able to comment and publish posts again.

Once unpublished, all posts by gitryder will become hidden and only accessible to themselves.

If gitryder is not suspended, they can still re-publish their posts from their dashboard.

Once unpublished, this post will become invisible to the public and only accessible to Danyl Fernandes.

Thanks for keeping DEV Community 👩‍💻👨‍💻 safe. Here is what you can do to flag gitryder:

Unflagging gitryder will restore default visibility to their posts.