In this article, I'm going to present you step by step what tools I use.
You can follow along, but it's more important to understand "why I am doing this" rather than "what I am doing".
A good advice is, try to do the same step alongside me in this tutorial. Then, try to change a few bigger and bigger things. Finally, at the end, you should be able to do everything again on your own.

You can find all the produced code over at the Github repository.

First of all, and this is really important, all of this is my own bias opinion on development. We all have our unique way at looking at things.
Web development is a huge and complex topic. This post is not meant to describe the easiest or quickest methods.
However, this is the methods I grew up preferring (for reasons I'll get to), and the one I'm most capable of explaining in details.

From here, I assume you have basic Javascript and Vue understanding. I'm also not going to detail how to install Node.js and how to use NPM.

With that out of the way, let's start with languages.
I have worked with Javascript for about 10 years. It has a lot of detractors, but it was and still is the language I enjoy the most.
It's easy to use, has one of the largest community and can power huge application.

Of course, I'm also writing everything in English. Although it's not my mother tongue, it's recognize as the international language.

Node.js is installed on my computed, so I'll use NPM to install all my JS dependencies.
The first thing I always do when starting a new project is

This will create the package.json file.
Then I manually create a readme.md and .gitignore file as well as a src directory that will be useful later.

I like Vue and that's what I mostly use. The installation is straightforward

I like the modular template syntaxe that Vue offer. However, this is not native JS that a browser can understand.
So, it needs to be transformed before it can be used.

I use Webpack for that. The installation is not as simple because we need a lot more modules.
First, let's start with Webpack itself and its CLI interface

Then, I need to add the plugin that handle Vue files with its compiler

Finally, chances are that I'm going to write CSS, so I need another pair of plugins to handle CSS code

Now, I need to configure Webpack. This is the least fun part, but we need to understand this step to solve possible future issues.
Webpack can be configured with a file named webpack.config.js, so let's create it.

Here is the bare minimum. We'll come back later if we need to expand it.

With all that out of the way, I just need to run in my terminal

to see my project being entirely compacted and minified. This will fail for now, don't worry.

These tools are out of scope for this article. Maybe I'll go in more details in the next one.

I always use Eslint to check for potential mistakes in my code.
In order to use it with my personal configuration I run

I try to test my code to catch regression and be sure that I cover most use cases. I use AVA for the test and NYC for the code coverage.

That's already a lot of steps, and I haven't even write a single line of code. All of that looks like a lot, but trust me, it will make you go faster in the future.

The most attentives around you would remember that in my Webpack configuration, the entry file was ./src/index.js. So, let's start there.
I create an index.js file in src and add a few lines of code to call Vue (with ESM).

With this bare-bones JS file, I can safely run

to trigger Webpack in development mode (slower but more descriptive on errors) with watch (will rebuild every time I change the code).
This will create a new main.js file within a dist directory. It's the file that my final users will use.

I now create a index.html file (usually in a public directory, but it doesn't matter).

Opening this file in your browser will show nothing as expected, but this is all working. This is the state of my project so far. 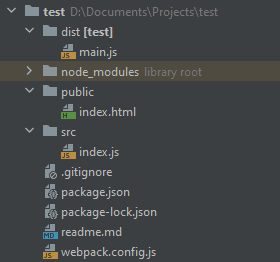 Your Vue files should be split between views (an individual screen, eg: Menu, About ...) and components (composing your views, eg: Button, Footer ...)
Both works the same, but don't have the same concerns. So let's add two directories (views and components) in src to sort them out.

Let's begin by creating a new view. This is going to be the homepage, so I'll call the file Home.vue.

I used a capital letter in the file name to show that it's a class as in other OOP language like Java.

In order to go into that view, I have to tell my Vue instance to render it. In the index.js file, I'll add the necessary lines.

In order to have more views, you need navigation between the views, so you need vue-router. We're not going to talk about it for now.

Imagine I want to have a simple card (title + text) for each film I want to see, I don't want to duplicate the code for each cards. A good rule is DRY (Don't Repeat Yourself).
If you write something more than twice, it should be factorized in one place.

Again, I create a new file called Film.vue in the components directory.

And use it in Home.vue.

As you should already see, I have 3 cards with the same title and text.
Which is not what I want to do.
If I add properties to my card component and write data in my home view, it will allow me to define value for each individual card.

With that in place, any changes applied to my data will be reflected on screen.

I can, for example, fetch data from an API or allow the user to edit the page (or both 😉).

First, I'll fetch my data from a mock API online. In order to do that, I start by emptying the data array.
Then, according to the Vue lifecycle, I can use mounted function to execute code when the view appears on screen.

In the same way, I can allow users to add new film to the list. A small HTML form that push a new entry when submitted will see the modifications reflected on the view.

This will of course not save anything online, and changes made will be lost when the page is reloaded.
You could improve this example by sending a request to a server that save the inputs in a database.

I'm lazy. Being an efficient developer often means being lazy.
Instead of creating all my components, I can use already existing libraries of components. That way, I can focus more on content instead of how to correctly design a datepicker.

Since I use Vue, I choose a Vue compatible library, Vuetify.

Really few changes are needed to activate it in index.js.

Then I can use it everywhere in my application (here in Film.vue).

One of my favorite recent discovery is serverless. Basically, as long as your application is stateless (always return the same result with the same parameters), you don't need to have a complex, always running server. By leveraging the power of caching and ressource sharing you can reduce your server to almost nothing.

Using Vercel, I'm able to freely host, deploy and serve with a few clicks. All I need is for the project to be on Github.

You are using the runtime-only build of Vue where the template compiler is not available.

Your import of Vue is wrong. If you remember, there are many ways to import Vue. By default, import "vue" will call the vue.runtime.common.js file.
In my code here, I'm using the ESM with template (so I need the vue.esm.js).

Your application and Vuetify didn't import the "same" Vue. As explain above, it's important to import the right Vue for your usage.
A nice solution to this is to create an alias in webpack.

Why do you don't use CLI to setup your app ? (like vue-cli or create-react-app)

While these CLI are great ways to quickstart a project, they slow you down in the long run. They all use the same technologies I presented you today, but in a complex and confusing way.
Using create-react-app install about 2000 packages. If something goes wrong, debugging that much code is not an easy task.
I've always preferred taking the longer road, but at the end of the day, understand what's going on.

Why don't you need to import each Vuetify components when you use them ?

When I do Vue.use(Vuetify); in the index.js, it activates it in the whole project.
It's possible to import only Vuetify components when you use them. But this requires a bit more work that is out of scope for this tutorial.

Why don't you use X instead of Y ?

I'm used to it. I'm sure you'll find better alternative to any tools or methods I describe above. But I know them.
At the end of the day, it's more important to deliver than endlessly learn new technologies.

What are my alternatives ?

Once suspended, gmartigny will not be able to comment or publish posts until their suspension is removed.

Once unsuspended, gmartigny will be able to comment and publish posts again.

Once unpublished, all posts by gmartigny will become hidden and only accessible to themselves.

If gmartigny is not suspended, they can still re-publish their posts from their dashboard.

Once unpublished, this post will become invisible to the public and only accessible to Guillaume Martigny.