HTTP/2 is the first major upgrade to the HTTP protocol in over 15 years.
Websites have changed dramatically in the interim, with the number of external image, CSS, and JavaScript assets growing by the year. HTTP/1.1 wasn’t designed for this kind of complexity. HTTP/2 is optimized for the modern website, improving performance without complicated hacks like domain sharding and file concatenation. Adopting HTTP/2 speeds up your website without any changes to your existing codebase.

HTTP/2 demonstrated to be consistently faster then HTTP/1.1 on this test

The reason HTTP/2 is just 2x faster on 2G network is due to EDGE bandwidth constraints as at 170Kbps link rapidly saturates.

The primary goals for HTTP/2 are to reduce latency by enabling full request and response multiplexing, minimize protocol overhead via efficient compression of HTTP header fields, and add support for request prioritization and server push.
To implement these requirements, there is a large supporting cast of other protocol enhancements, such as new flow control, error handling, and upgrade mechanisms, but these are the most important features that every web developer should understand and leverage in their applications. 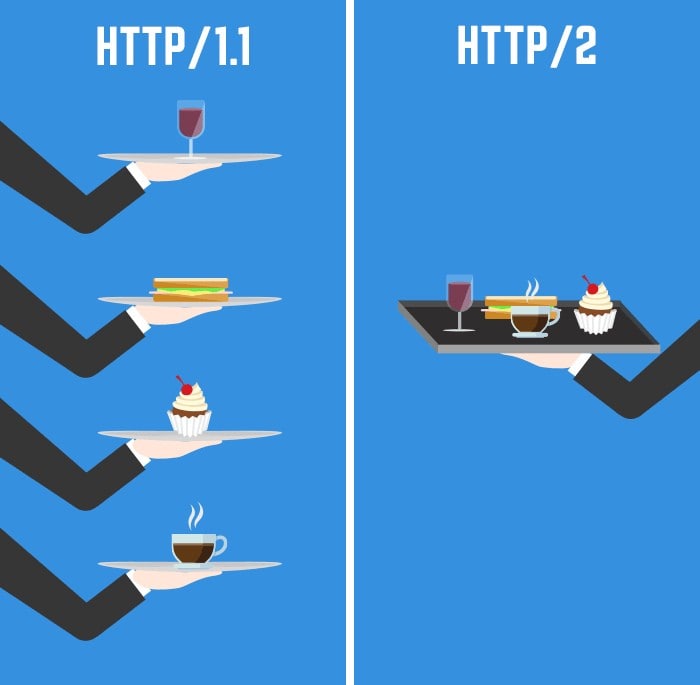 HTTP/2 does not modify the application semantics of HTTP in any way. All the core concepts, such as HTTP methods, status codes, URIs, and header fields, remain in place. Instead, HTTP/2 modifies how the data is formatted (framed) and transported between the client and server, both of whom manage the entire process, and hides all the complexity from our applications within the new framing layer. As a result, all existing applications can be delivered without modification.

To achieve the performance goals set by the HTTP Working Group, HTTP/2
introduces a new binary framing layer that is not backward compatible with previous HTTP/1.x servers and clients — hence the major protocol version increment to HTTP/2.

That said, unless you are implementing a web server (or a custom client) by
working with raw TCP sockets, then you won’t see any difference: all the new, low-level framing is performed by the client and server on your behalf. The only observable differences will be improved performance and availability of new capabilities like request prioritization, flow control, and server push!

HTTP/2 defines request priorities and supports cancellations, so that if an application needs to render i.e. a dynamic gallery preview it can request high priority images for the initial view, request images down the list and i.e. cancel their download if user would navigate away or scroll deep down the list.

HTTP/2 gives huge performance improvements over HTTP/1 in many ways, and server push is one of its features for performance.

A typical (and simplified) HTTP request/response flow is like this (The screenshot below is for connecting to Hacker News):

This means that there usually are multiple round-trips of requests/responses to render one HTML document because there are additional resources that are associated with it, and the browser needs them to render the document correctly. It would be great if all those associated resources could be sent to the browser together with the original HTML document without the browser requesting them. And that is what HTTP/2 server push is for.

In HTTP/2, the server can proactively push additional resources together with the response to the original request that it thinks the browser will request later. Later, if the browser really needs them, it just uses the already-pushed resources instead of sending additional requests for them.

Using Nginx as a proxy to multiple Unix sockets

Grigor Khachatryan
I am Director of Engineering, Infrastructure at Lyve Global. I am passionate about Open Source, Cloud Technologies, SaaS and DevOps.
What is HTTP/3 ?
#http3 #http #internet #quic
How To Set Up Nginx with HTTP/2 Support
#nginx #devops #http2 #http
How to setup Let's Encrypt for Nginx (IPv6/A+ SLL rating)
#ssl #ipv6 #nginx #letsencrypt

Once suspended, grigorkh will not be able to comment or publish posts until their suspension is removed.

Once unsuspended, grigorkh will be able to comment and publish posts again.

Once unpublished, all posts by grigorkh will become hidden and only accessible to themselves.

If grigorkh is not suspended, they can still re-publish their posts from their dashboard.

Once unpublished, this post will become invisible to the public and only accessible to Grigor Khachatryan.

Thanks for keeping DEV Community 👩‍💻👨‍💻 safe. Here is what you can do to flag grigorkh:

Unflagging grigorkh will restore default visibility to their posts.