Why do people star repos?

There are two main reasons why people star GitHub projects:

The latter is why I personally star projects. Regardless of whether I've used the project in the past, using it just now, plan to use it, or think it's a cool idea, I want the project creator to know that I like what they're doing. Terraform and Pulumi are projects that I recently starred to show support.

The main benefit of repo stars is creating confidence and a good first impression of the project. That in turn helps with the project getting users, and to a lesser extent contributors.

A 2018 academic research survey of over 700 developers found that "three out of four developers consider the number of stars before using or contributing to GitHub projects"[2]. GitHub stars are not the only metric that matters though. A project's activity level, for example its last release or commit, and its ease of use, for example the quality of its documentation, are also important factors in helping projects get users.

I say to a lesser extent as contributing, by creating a GitHub issue or submitting a pull request, requires significantly more effort than starring a repo. People who only star a repo are probably not yet active community members but they might become active in the future. This is why the Orbit Model classifies them as Observers[3], as they can act as the top-of-funnel for growing users and contributors. hugely popular

In addition to helping projects get users, GitHub stars can help the project creators meet investors who are familiar with open source. Early on in Infracost's journey, we were surprised to get cold emails from VCs congratulating us on our star count. After speaking with a few, it became clear that they either had systems in place to monitor stars[4], or had analysts who reviewed Trending Repos on GitHub for potential investment opportunities[5]. Some have gone even further. For example, the VC firm Runa Capital, who invested in Nginx and MariaDB, has started to track the fastest growing open source startups using GitHub stars and forks. Infracost was recently placed 5th on the ROSS Index[6]. 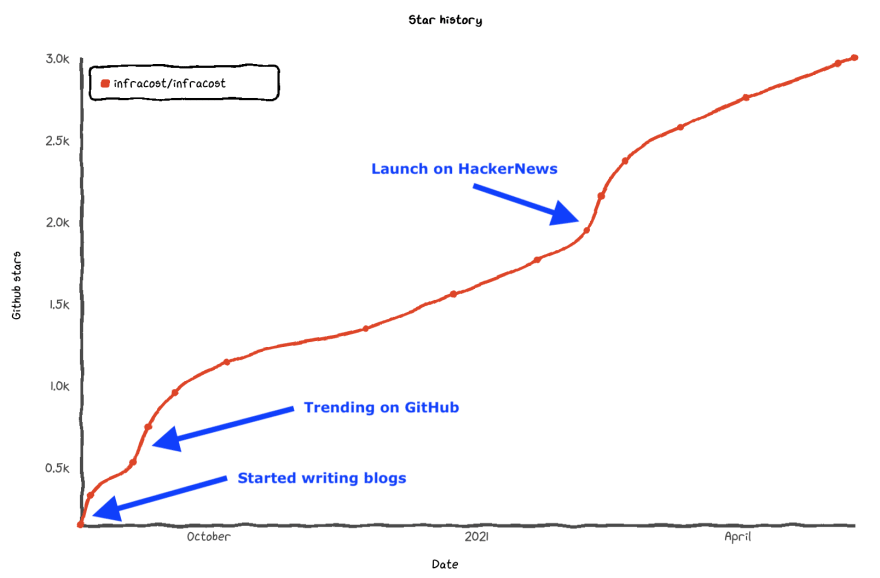 A16Z's Martin Casado thinks that there is a big trend towards bottom-up strategies in business-to-business (B2B) software that will shape the entire B2B landscape in the next 10 years[7]. I wonder if in the same way that social media influencers are changing how products are marketed and sold, GitHub influencers (someone with many GitHub followers) will change how enterprise software is marketed and sold? Developer Advocates are currently using Twitter and LinkedIn, but GitHub has a "follow" and a "status update" feature too. Will those remain as a simple way to get updates on code-related activities? Or could they be extended to enable GitHub influencers to post their demos, talks and blogs into the GitHub activity feed? Will companies be able to buy ads on GitHub and promote their open source projects?

Over to you - what have you learnt about GitHub stars, and how do you think they'll change in the future? I hang out on Twitter...

Why I chose Auth0 for my startup

Understand the Root Cause of Regressions with Git Bisect

Once suspended, infracost will not be able to comment or publish posts until their suspension is removed.

Once unsuspended, infracost will be able to comment and publish posts again.

Once unpublished, all posts by infracost will become hidden and only accessible to themselves.

If infracost is not suspended, they can still re-publish their posts from their dashboard.

Once unpublished, this post will become invisible to the public and only accessible to Ali Khajeh-Hosseini.

Thanks for keeping DEV Community safe. Here is what you can do to flag infracost:

Unflagging infracost will restore default visibility to their posts.