Web workers are a great way of offloading compute intensive tasks from the main thread. I have been interested in using them for quite a while, but none of the projects I worked on really justified using them. Until now! In this short series I'm going to explore using webworkers, physics, pixi.js and others to create interactive web experiences and games.

In depth info, better than I could ever explain:

The benefits of using webworkers are undeniable. Most importantly it keeps main thread responsive. Frozen webpages and slow UI make for terrible user experience. In my case, even if the physics simulation slows down to 20-30 fps, mainthread renderer still runs at a constant 144 fps. It helps keep animations nice and juicy and the page responsive to user inputs.

I am guilty of making very CPU intensive terrain generation in the past, it would freeze a user's browser for 2-3 seconds and it was terrible.

This is not a step by step tutorial, I wanted to keep this article more conceptual and code-light. You should be able to follow my Spaghetti code in the project repo.

I decided against using any framework to avoid unnecessary complexity. For my bundler I decided to use Vite since I was familiar with it and the provided vanilla Typescript template. It provides an easy way to import webworkers and their dependencies even from Typescript files.

Pixi.js is a fairly easy to use WebGL renderer. It will show what we're doing on screen. Everything I'm doing can be replicated by copying one of the examples. All you need is to:

4. Physics engine in the worker.

Matter.js is a 2D physics engine I've decided to use. It's far from being the most performant, but it's user friendly and helps keep code complexity down.

Engine, World and a 'gameloop' get created when web worker is loaded. Gameloop is a function that continuously runs and calls Engine.update(physics.engine, delta);

Like I mentioned before, worker and the thread communicate with messages. I found this to be a natural fit for a command pattern.

Actor (either main or worker thread) sends an object that has all information required to perform an action by the subject. I decided to structure my commands like below.

To send the above command, main thread calls worker.postMessage(command);. For a worker to receive it, we need to set up a listener.

Here's a general overview of how this example works 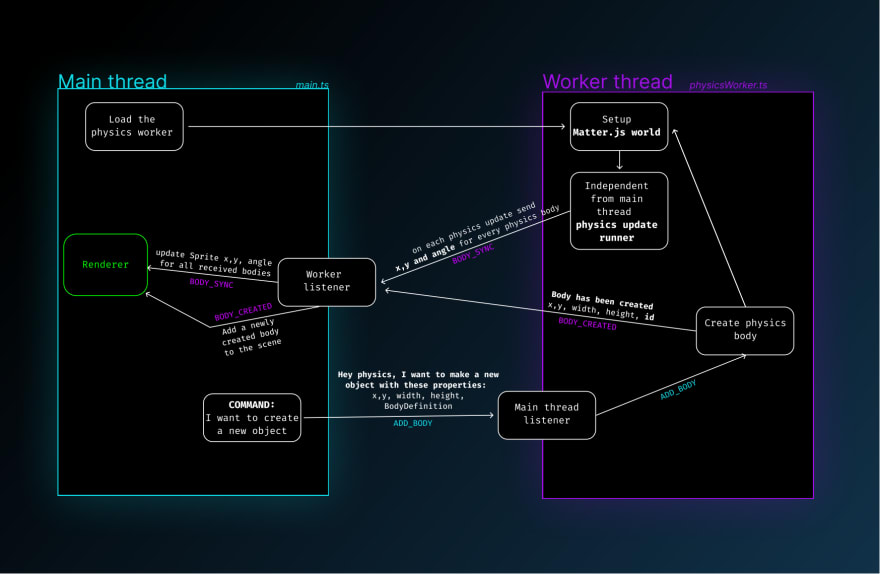 According to this outdated benchmark matter.js is one of the slowest available javascript physics engines. It's performance has improved since then, but there are other alternatives. I am especially interested in WASM libraries with js binding, like

In general, chosing a WASM engine over JS one should yield large performance gain.

Sending large amounts of data at high frequency (gameloop) between worker and mainthread with messages can cause large performance drops.

In depth dive into the issue: "Is postmessage slow?" - surma.dev

I guess it's time for my own benchmark!

3. Using a webworker library instead of vanilla implementation

I can imagine that communication with vanilla webworkers could get very complex. Comlink is something that's been on my list for a while and I'd like to try it out.

From the Comlink Github page:

Comlink makes WebWorkers enjoyable. Comlink is a tiny library (1.1kB), that removes the mental barrier of thinking about postMessage and hides the fact that you are working with workers.

At a more abstract level it is an RPC implementation for postMessage and ES6 Proxies.

If the use case doesn't call for more, I could keep the physics engine locked at 30 or 60 fps. The issue with this, is that the movement will look 'choppy'.
I could use interpolation and use available position and velocity data to 'predict' object movement and generate the frames up to say 144fps for smooth animations.

This turned out much longer than I expected. More to come?

Once suspended, jerzakm will not be able to comment or publish posts until their suspension is removed.

Once unsuspended, jerzakm will be able to comment and publish posts again.

Once unpublished, all posts by jerzakm will become hidden and only accessible to themselves.

If jerzakm is not suspended, they can still re-publish their posts from their dashboard.

Once unpublished, this post will become invisible to the public and only accessible to Martin J.

Thanks for keeping DEV Community 👩‍💻👨‍💻 safe. Here is what you can do to flag jerzakm:

Unflagging jerzakm will restore default visibility to their posts.