A picture is worth a thousand words 😀! You can derive valuable insights from data and also communicate these insights via data visualization.

We would clearly see trends and derive insights via Python’s Matplotlib library, which is the foundational library used by many visualization tools. There are 3 main layers in Matplotlib’s architecture and from top to bottom in terms of the high-level commands, they are -

So, with what we have above, there are essentially 2 ways to create plots in Matplotlib -

Everything we plot in Matplotlib is contained in a figure object which can contain one or more axes. Take a look at figure anatomy image below - 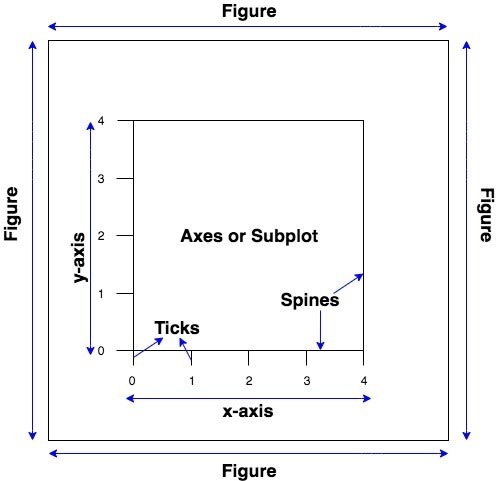 We would focus on the object-oriented way in this piece since we can do a lot more customizations with it. Also, note that there are different ways to create an axes - an axes is contained in a figure as seen above. These different ways of creating an axes still produce the same results - I will highlight the different ways. Now, let’s kick off some Matplotlib plotting by taking a look at 1.py below:

1.py produces a figure with 1 axes image below - 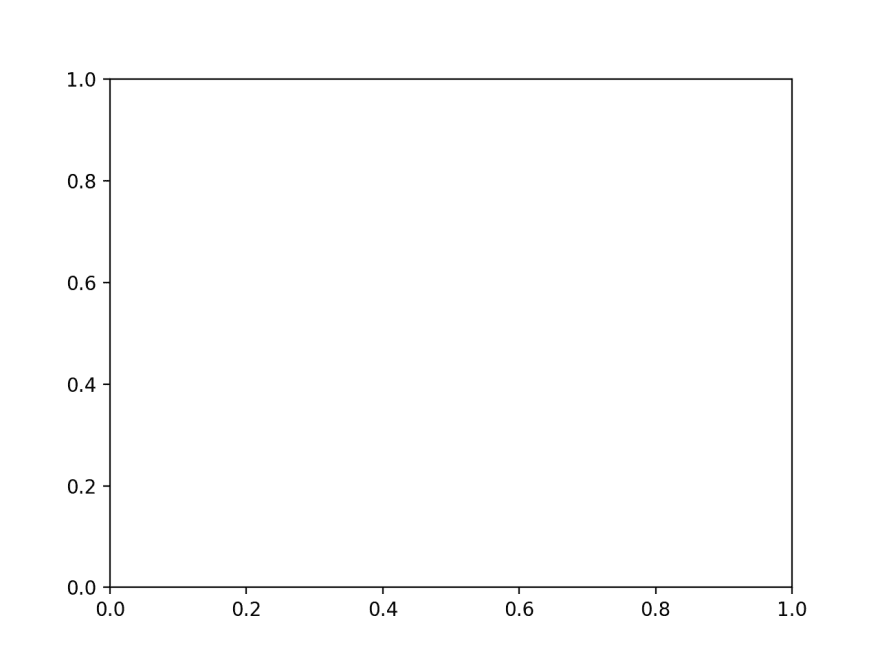 Now let’s add some fictional data to our figure! See 2.py below - 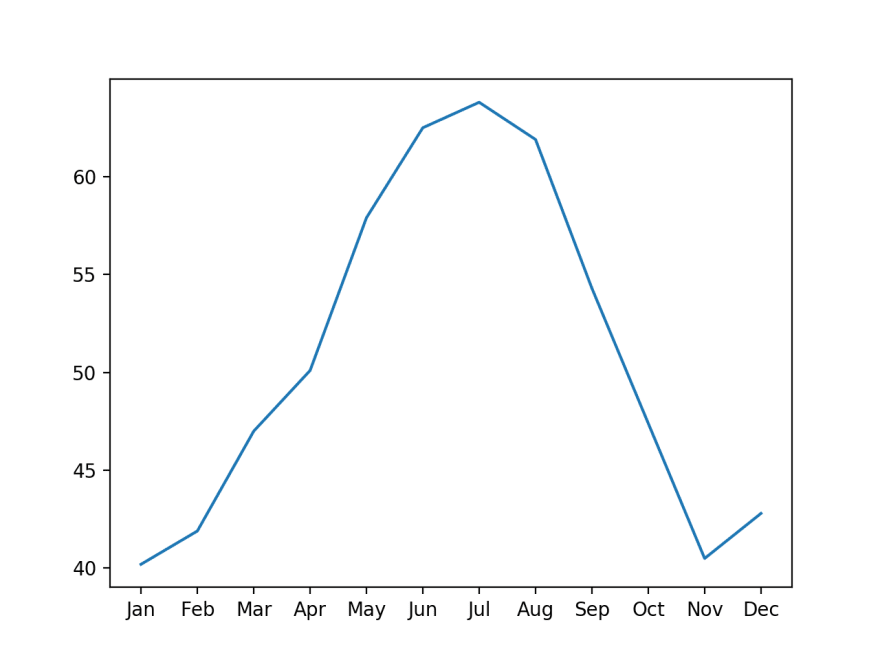 In the line plot above, we can clearly see the temperature pattern as it increases from Jan to Jul then it starts decreasing from Aug to Nov then it starts increasing again. Imagine you have lots of data, would you rather go through the pain of reading off average temperatures from a table or use the line plot which shows clearer trends in the data?

We can even add more fictional data like in 3.py below -

3.py above produces a line plot of Lagos and Abuja average monthly temperature we see below - 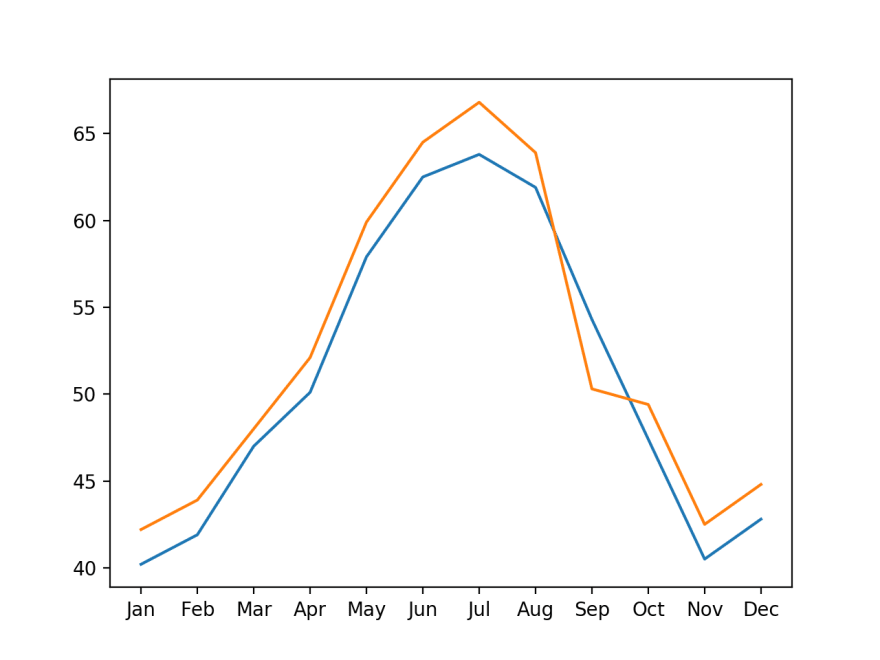 In the image above, we can clearly see -

The line plots we have seen so far shows us the monthly trends for the average temperature across different cities but it does not communicate the data properly in a way that it can be easily understood. This is where we have to customize our plot in order to communicate the information more clearly. Let’s see 4.py below for some customizations - 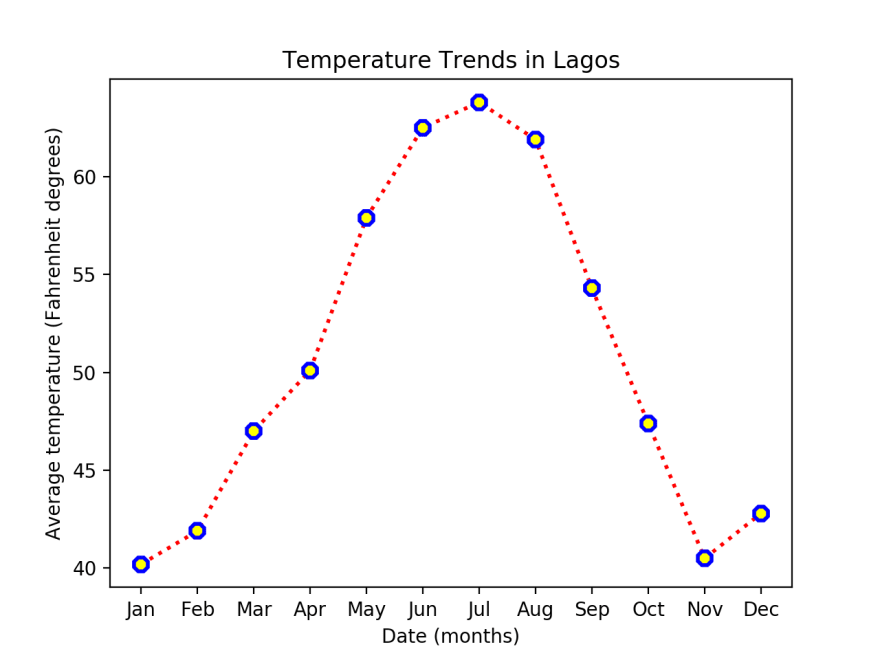 To customize the line plot of Lagos and Abuja average monthly temperature, see 5.py below -

5.py above produces a customized line plot of Lagos and Abuja average monthly temperature values below - 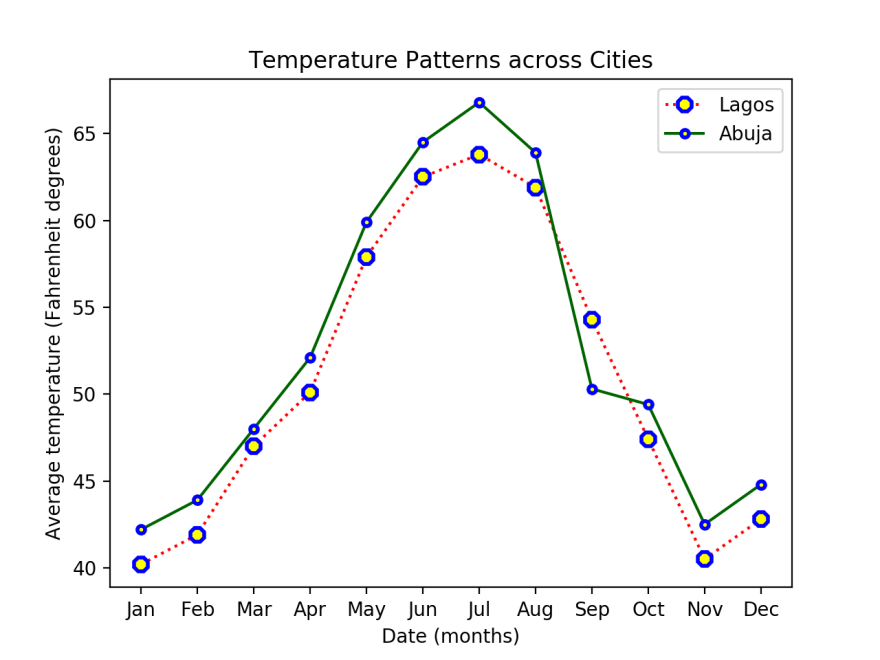 Sometimes, when we add more data to a plot like in customized line plot of Lagos and Abuja average monthly temperature values above, it makes it look so busy and it becomes a big mess which conceals patterns or trends in data rather than conveying them. The solution to this is to use subplots. Subplots are several small plots which show identical data under different conditions e.g temperature values data for different cities. Let’s see 6.py below for an example -

6.py above produces subplots of the average monthly temperature across cities 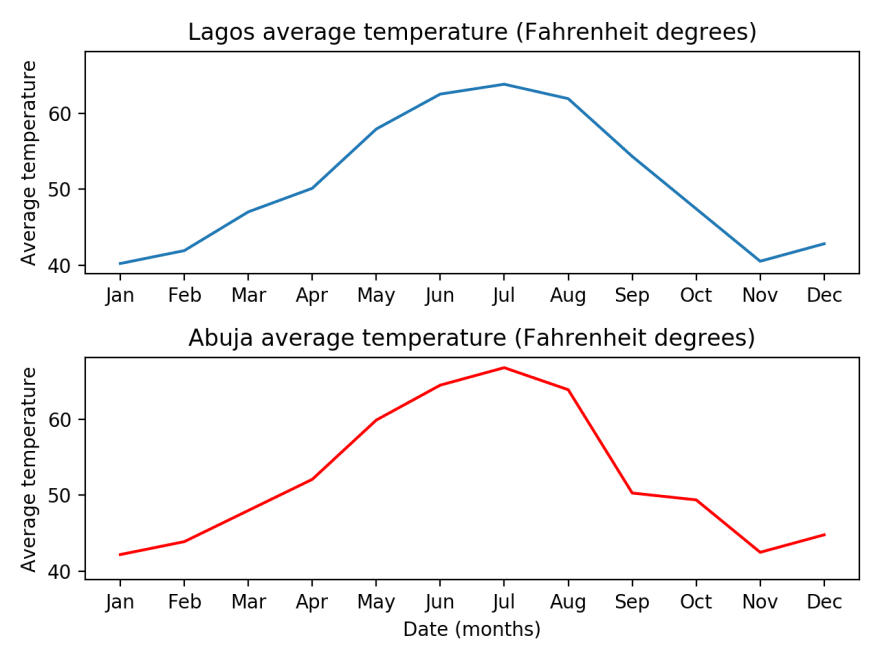 In the example given in 6.py above, we got a 1-dimensional axes object since one of the dimensions is 1. For a 2-dimensional array, we can access the object in several ways like we see in lines 29-69 -

As seen above you can create axes via different ways e.g. by adding an axes to the figure via fig.add_axes(), this would not be a subplot, but an axes which is an object of matplotlib.axes._axes.Axes. An axes, which is created via the subplot way is a matplotlib.axes._subplots.AxesSubplot. This class derives from matplotlib.axes._axes.Axes, thus this subplot is an axes. Hence, every subplot is an axes object but not every Axes object is a AxesSubplot object. An axes contain the x-axis and the y-axis. Be it singular or plural, it is still called axes.

Alrightee!!! Glad we are gradually demystifying the mystical Matplotlib library. I know you will eventually get the hang of it and begin your tour in becoming a Data Viz Wiz! Stay tuned to this series for my next article on Visualizing categorical and quantitative variables via Matplotlib! Have an amazing and fulfilled week ahead!

Creating a Simple Weather App with Python and Flask

Make a Simple Employee managing app in Django with Class Based Views (With Login, Logout)