Array data structure stores a fixed number of data of a single data type. Elements (items) in an array are stored in a block of contiguous memory slots. Due to this, elements in an array are assigned consecutive numbers, starting from 0 or 1, as their “indexes”.

One can access a single element stored in an array at random using its unique index. Accessing an element using the index has a time complexity of Θ(1). Reading or updating array elements can be easily achieved in this manner. Because of the contiguous location of array elements, arrays traversal is faster compared to most of the other data structures.

Inserting to or deleting from an array is a rather complex and time-consuming task. When inserting, all the elements in the current array are copied to a newly created array with increased size, and the new element is added to the end of the new array. Deleting is also implemented in a similar manner to reduce the array size.

Arrays can be multi-dimensional (array of arrays). This makes arrays a good choice for storing matrices and vectors. Arrays are frequently used to implement other data structures like lists, heaps, stacks, and queues. 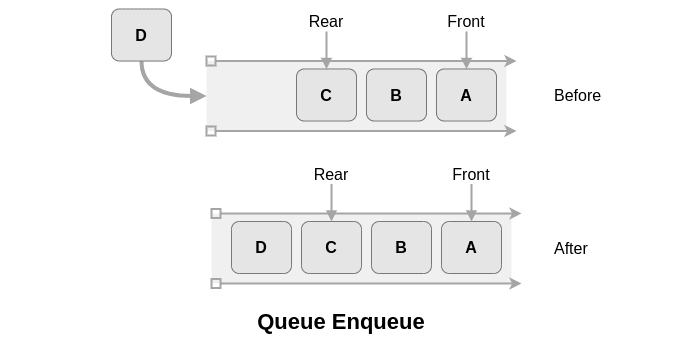 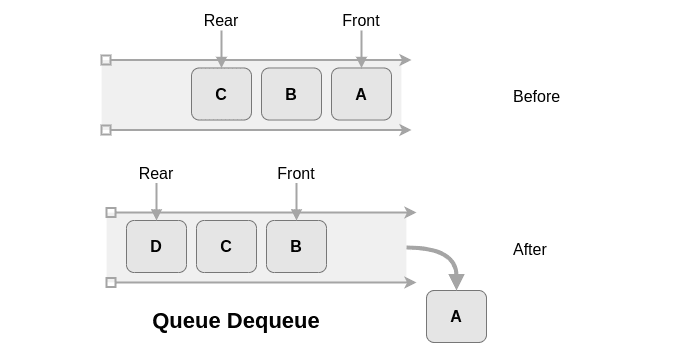 Queues are used to implement buffers. Multithreading uses queues to manage tasks waiting to be implemented by threads. 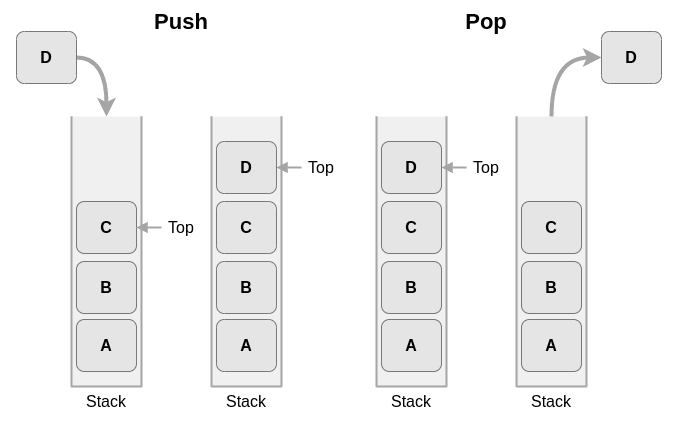 Stacks are used to handling and evaluating mathematical expressions. They are also used in algorithms that use a backtracking procedure. Handling recursive function calls in recursive programming is another application.

A linked list is a dynamic data structure. This means the number of data items stored in a linked list can easily expand or shrink. This gives linked lists more flexibility compared to arrays that have a fixed size. Linked lists achieve this dynamic quality by storing each item as a separate object.

There are two important nodes in a linked list: head and tail.

However, with linked lists, you cannot directly access a single data item without traversing through the list starting from the head. This gives the access operation a time complexity of Θ(n).

A graph consists of a finite number of data items called vertices (V). Some pairs of these vertices are linked to each other through edges (E). Two vertices connected by an edge are adjacent to each other.

Let’s look at a few terms associated with binary trees. 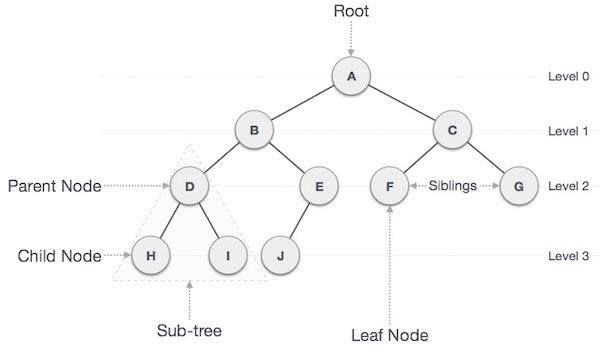 The main advantage of a BST, as the name suggests, is being able to search for stored data fast. The time complexity of searching for a stored element in a BST is O(log n).

Heap is another special case of binary trees. In heaps, the key of the root is compared with the key of its children to arrange them in a specific way. There are two types of heaps. 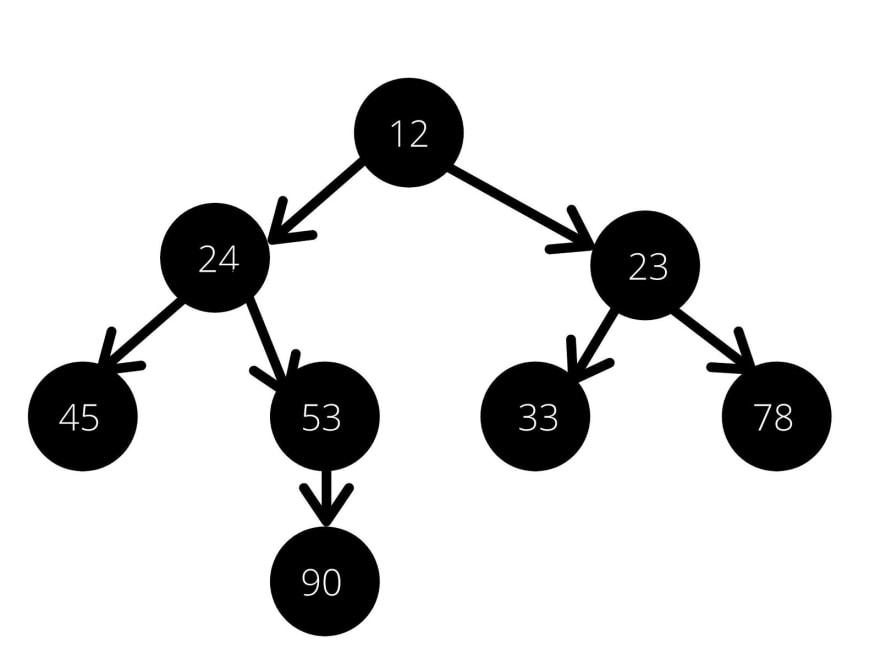 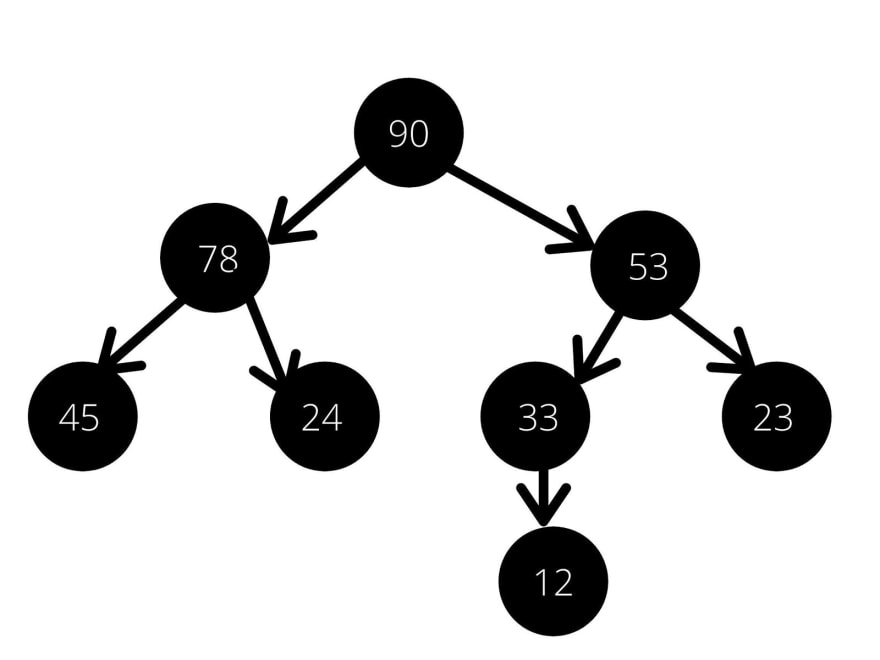 Heaps are used in implementing the heapsort algorithm. Heaps are also used to implement priority queues because the first element of the heap is always storing the value with the maximum (or minimum) priority.

Hash table is one of the most efficient data structures we can use when we want to maintain the speed of searching and insertion operations on a large dataset. Every data value stored in a hash table is associated with a key that gives fast access to the stored value if we know the key. Think of a student registration system where each student has a unique student ID which can be used as a key to store their data in a hash table.

Hash tables use arrays to store data values. The key is used to finding the index within the array where the value is stored. But how does hash tables map these keys with their values?

One of the methods that can be used is direct addressing. It uses one to one mapping: each key points to the exact location its data is stored at. But this approach does not use memory efficiently, especially as the number of key-value pairs grows and the keys become larger in size. So instead, hash tables use hash functions. 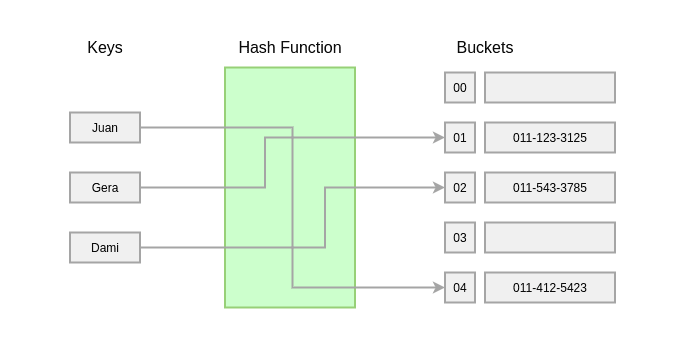 Consider the hash value of the key 2021, which is 1. We previously saw that the value associated to the key 1001 is stored at index 1 in the hash table. When the hash values generated by two keys are similar, we call it a collision. Hash tables use techniques like chaining and open addressing to address this problem of collision.

Hash tables have searching and insertion time complexity of O(1).

If you like the story, please don't forget to subscribe to our free newsletter so we can stay connected: https://livecodestream.dev/subscribe

BaseCS: The Magic Number of Computers