How to Present and Dismiss a Modal in SwiftUI

In this post, we will cover how to present and dismiss a modal view.

Find the source code at this Github Repo.

Let's get started by making a new project using SwiftUI. When creating a new project, make sure that the language is set to Swift, and the User Interface is configured to SwiftUI like in the picture below. 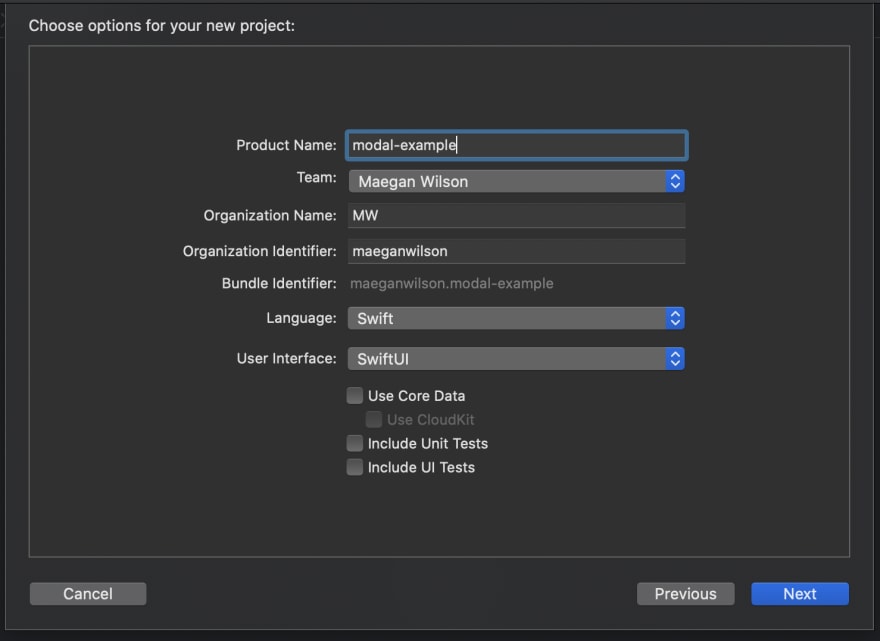 Now that the project is made, we need to open the ContentView.swift file to declare a variable that determines whether or not to present the modal.

The variable has to be a binding variable and one that can update the view when changing, which is why we declare it as a State variable.

Button to change the state!

Let's change the Text() to a Button() that sets show_modal to true.

I added a print() statement to make sure the button works.
Go ahead and run the app (Command + R) and click on the button. By clicking on the button, "Button Pushed" will be printed in the console.

Now, let's create the modal view. Create a new file and change the Text to "This is a Modal." It should look like the code snippet below.

It's time to make the modal appear from the button push on the first view. Open ContentView.swift and add the following to the button.

What does .sheet() // more code do? It is deciding if ModalView should be presented when show_modal changes.

.sheet(isPresented: Binding<Bool>){ /* View to present */} is a modifier that can present the view when isPresented is true. In our example, show_modal is a Binding<Bool> because it is declared with @State. We also set the view to be presented as ModalView().

ContentView.swift should now be complete and look like this.

Running the application right now, we can dismiss the modal by dragging down from the top of the modal.

Dragging works to dismiss, but sometimes users would instead hit a button, or maybe you want the user to hit the button to confirm, and a drag cancels the operation. To add a button to dismiss the modal, we need to put add an Environment variable for presentationMode and then call presentationMode.wrappedValue.dismiss(). Here is how it looks in ModalView.swift.

I'm going to break down what we did.

Now, running the application, we can dismiss the view either by dragging or by tapping on the button.

If you enjoy my posts, please consider sharing it or Buying me a Coffee!

I was asked by @cwhooten how to make a list that presents a dynamic modal. You can find that answer as a branch to the original example by clicking on this sentence.

Updated the note at the top.

Updated the note at the top since it has been tested with Release Xcode and Release iOS 13.

Working with VideoToolbox for more control over video encoding and decoding.

The History of RTSP Streaming