Is there a computer science topic more terrifying than Big O notation? Don’t let the name scare you, Big O notation is not a big deal. It’s very easy to understand and you don’t need to be a math whiz to do so. In this tutorial, you'll learn the fundamentals of Big O notation, beginning with constant and linear time complexity with examples in JavaScript.

This is the first in a series on Big O notation. If you want to stay in the loop, sign up for my weekly newsletter, The Solution.

You will probably read or hear Big O referred to as asymptotic runtime, or asymptotic computational complexity. This is a fancy way of describing the limits of a function. There is a branch of mathematics, order theory, devoted to this topic. For our intents and purposes, order:

… provides a formal framework for describing statements such as "this is less than that" or "this precedes that".

We use order to evaluate the complexity of our algorithms.

You don’t need to be a math whiz to grok Big O, but there are a few basic concepts we need to cover to set you up for success.

If you recall from algebra, you worked with functions such as f(x) and g(x), and even did things like f(g(x)), where f() and g() were equations and x was a numerical value (or another equation!) passed to the functions.

When we’re programming, we give our “equations” descriptive names (at least I hope you are), such as isAuthenticated and calcuateMedian, but we could also name them f and g (please don’t).

We could say that the order of magnitude, or rate of growth, of f(x) is O(n2). We’ll see why later.

How Does Big O Notation Work?

The worst-case scenario is also known as the “upper bound”. Limits again!

You’re going to encounter a lot of tables like this:

This lists common runtimes from fastest to slowest.

We’ll refer to this a lot as we proceed.

Before we get into any code, let’s get hands-on to get a feel (pun intended) for Big O. We’ll use an example from Grokking Algorithms.

Let's say I give you a square piece of paper and ask you to divide it into sixteen squares. How would you approach this problem?

You could take the brute force approach and draw sixteen individual squares. If you take this approach, how many steps, or computations, will you perform?

Is there an approach that requires fewer steps? Of course!

Fold the paper in half. Then in half again. Four squares!

Now fold it in half two more times.

When you unfold it, the paper will be divided into sixteen squares.

How many steps, or computations, were required? 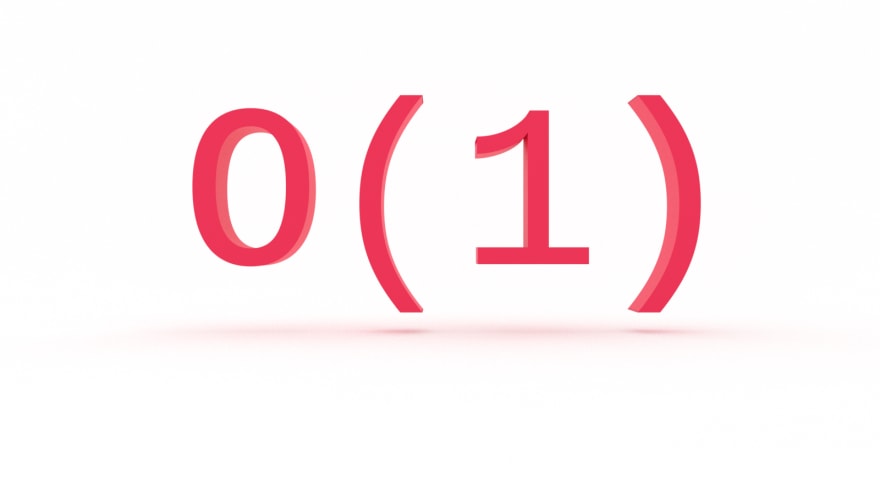 Say you’re working with an API that returns a users full name in an array, like so:

Your task is to get the users first name. Easy, in JavaScript:

No matter how many times you run your ‘algorithm’, it only needs to perform one operation to return the desired value. That’s O(1), or constant time.

Our algorithm checks whether or not a number is even or odd and will return true or false accordingly. It only needs to perform one operation. Again, O(1).

Big O notation is not a big deal. It’s very easy to understand and you don’t need to be a math whiz to do so. In this tutorial, you learned the fundamentals of Big O notation, as well as constant and linear time complexity with examples in JavaScript.

Stay tuned for part two of this series on Big O notation where we'll look at O(n), or linear time complexity. If you want to stay in the loop, sign up for my weekly newsletter, The Solution.