The internet has inarguably been the most important technology revolution in the history of mankind and fortunately, we have been in the right generation to keep up and observe the wide impact that it has on the world. However, the web that we know today has seen many phases, broadly categorized into three phases - Web 1.0, Web 2.0, and Web 3.0.

Let's dive a little deeper and discover how the web evolved from its inception to what we know it as now.

Web 1.0 was the first stage of the World Wide Web revolution, usually referred to as read-only web. This was how the Internet we know today started in the first place, where the websites were merely informational and comprised entirely static content; they were only linked together by hyperlinks and lacked any interactive content or design elements.

Moreover, this was the era when only text emails could be written and sent, one could not even upload or attach any images or pictures. Although, personal pages were quite common, consisting mainly of static pages hosted on ISP-run web servers, or on free web hosting services. Interestingly, it cost the user as per pages viewed. It had directories that enabled the user to retrieve a particular piece of information.

In a nutshell, Web 1.0 was a content delivery network (CDN) that enabled to showcase of the piece of information on the websites where users passively receive information without being given the opportunity to post reviews, comments, and feedback. The content here was served from the server's file system and the pages were built using Server Side Includes (SSI) or Common Gateway Interface(CGI). Interestingly, frames and tables were used to position and align the elements on a webpage back then! 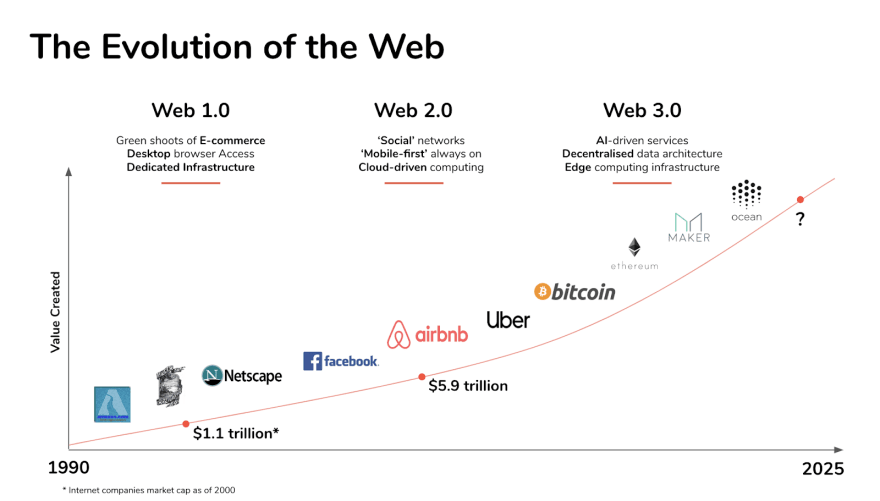 It spawned the dot-com bubble, which lasted from 1995 to 2000 and included many internet-based businesses. These were the companies that emerged with Web 1.0:

Web 2.0 was the second stage of the evolution of the web, also called the read-write web and it was the phase when websites grew in terms of user interaction. It was the period when websites became more focused on user-generated content, usability, and interoperability for end-users, leading them to become the - participative social web. 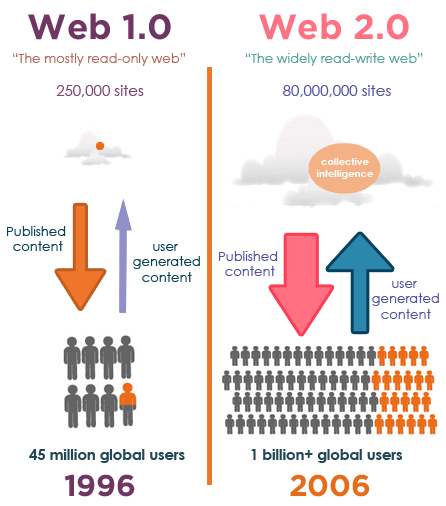 During Web 2.0, terms like blogs, social media, and video streaming gained popularity. This time period is also acknowledged for the ease with which music and video clips could be exchanged. It opened doors to podcasting, blogging, tagging, curating with RSS, social bookmarking, social networking, social media, web content voting, etc. It was the birthplace of Youtube, Wiki, Flickr, Facebook, and so on. Also, blogging became popular with the introduction of WordPress which started as a PHP & MySQL-led blogging platform and has now advanced to become a full content managed system (CMS) which powers over a quarter of the web and e-Commerce completely revolutionized the way we shop. 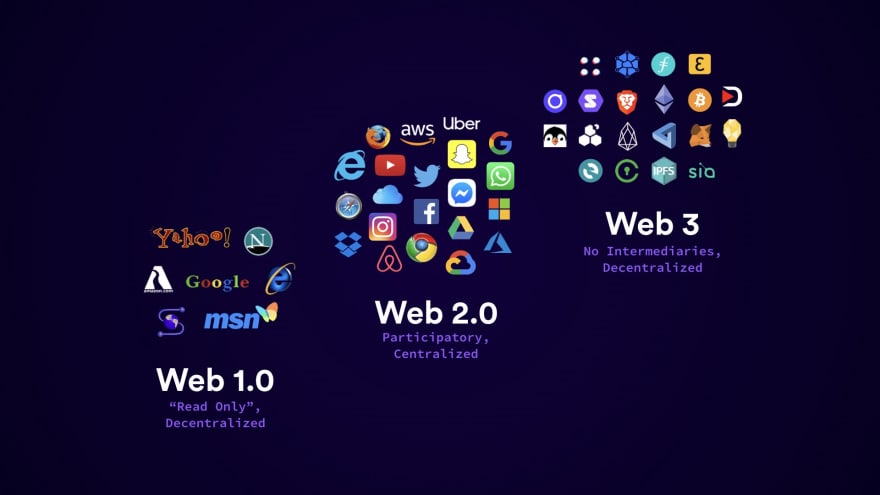 Thus, Web 2.0 brought a fundamental shift where people were allowed to share their perspectives, opinions, thoughts, and experiences via a number of online tools and platforms. It brought us the concept - ' Web as Platform ', where software applications are built upon the Web as opposed to upon the desktop. This was when websites began using web browser technologies such as AJAX and Javascript frameworks. This period continued to see the origin of APIs(Application Programming Interface) - a software intermediary that allows two applications to communicate with one another.

Web 3.0 is the next generation of web, also termed as the executable web or read- write-execute web. It began with the onset of dynamic applications, interactive services, and “machine-to-machine” interaction. It is used to describe many evolutions of web usage and interaction between various paths. Data is not owned in this case, but rather shared, with services displaying different views for the same web/data. 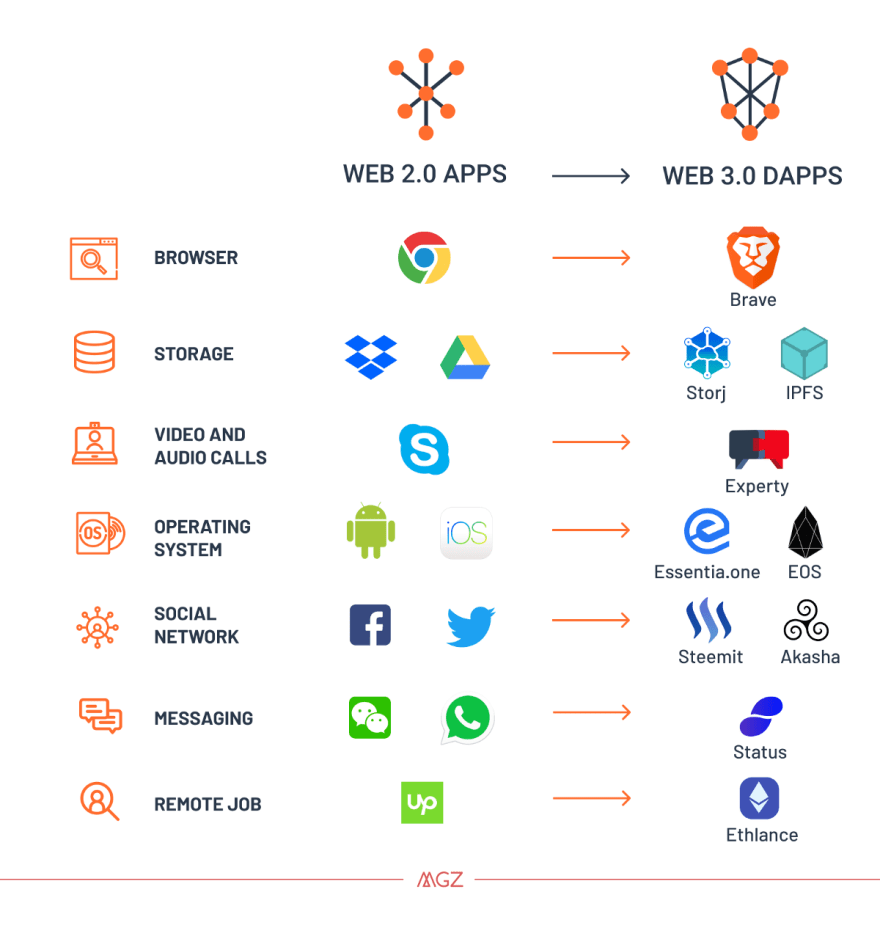 It has also been referred to as Semantic Web to describe a web in which machines would process content in a humanlike way where all data would be connected and understood both contextually and conceptually, leading to the herald of Artificial Intelligence and Machine Learning. With this, information is more connected thanks to semantic metadata. As a result, the user experience evolves to another level of connectivity that leverages all the available information.

Two key terms associated with this phase are - semantic markup and web services. Apart from defining an item's appearance, semantic markup aids in its description. It guides in the search for other matched items based on similar attributes. Semantics, as opposed to Web 2.0, focuses on easy searching. You can now simply enter a keyword into Google Search and it will intelligently suggest related words.

The future of Web 3.0 points to universal applications which can be read and used by a large number of devices and software types, making the ways in which we indulge business and leisure increasingly convenient. 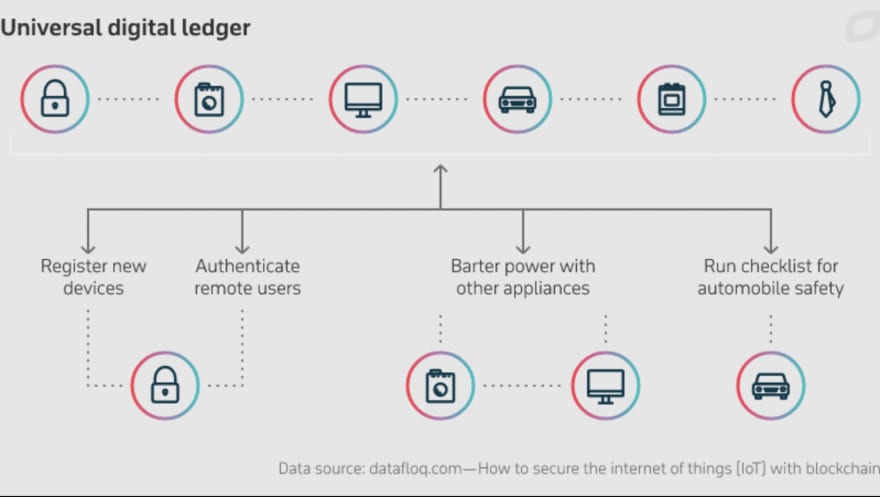 The rise of technologies such as distributed ledgers and blockchain storage will enable data decentralization and the creation of a transparent and secure environment, subverting Web 2.0's centralization, surveillance, and exploitative advertising. Decentralized infrastructure and application platforms will displace centralized tech giants, allowing individuals to rightfully own their data. 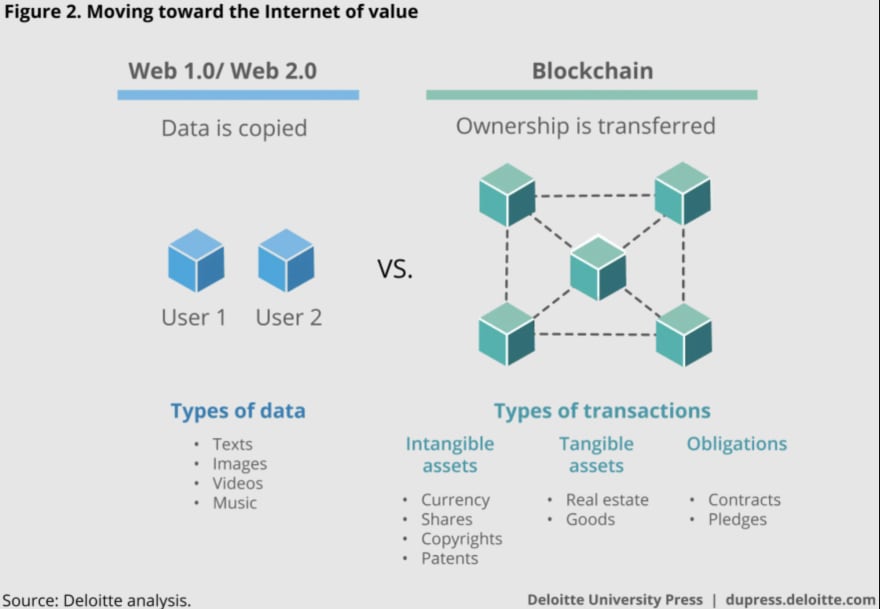 Indeed, one of the most significant implications of decentralization and blockchain technology is in the area of data ownership and compensation. As we move toward Web 3.0 and the technologies that support it would mature and become scalable, thus, the decentralized blockchain protocol will allow individuals to connect to an internet where they can own and be properly compensated for their time and data, eclipsing an exploitative and unjust web in which giant, centralized repositories own and profit from it.

Well, that's all for this article. The internet has radically altered the world we live in today and the ability to be more productive and stay in touch with others through various means is just the tip of the iceberg. Let's see what more Web 3.0 unfolds for us. Till then remember,

You affect the world by what you browse.

Do let me know if this was insightful or even slightly helpful, any feedback is welcome. Want to connect with me, find me here:
LinkedIn | GitHub | Twitter | Medium

5 Best practices for a React Project.

Bun command not found on Linux

Once suspended, pragativerma18 will not be able to comment or publish posts until their suspension is removed.

Once unsuspended, pragativerma18 will be able to comment and publish posts again.

Once unpublished, all posts by pragativerma18 will become hidden and only accessible to themselves.

If pragativerma18 is not suspended, they can still re-publish their posts from their dashboard.

Once unpublished, this post will become invisible to the public and only accessible to Pragati Verma.

Thanks for keeping DEV Community safe. Here is what you can do to flag pragativerma18:

Unflagging pragativerma18 will restore default visibility to their posts.