It’s a new day for the United States of America! On Day 1 of the new presidency, an updated White House website was released with a lot of thought put into Web Accessibility. It’s clear that they want to ensure functionality and all content is fully accessible to all its users, regardless of their hearing, movement, sight, and cognitive abilities, as well as cultural heritage.

Designing in a more inclusive way should be at the forefront of priorities in the world of UX and product design. Ensuring accessibility guarantees that your content is seen by EVERYONE, and brings a sense of humanness to tech.
Thinking of all your users and their needs when shipping a product or website creates an impactful experience that is meaningful in ways that the majority of us (thankfully) won’t realise.

A snazzy new light / dark mode theme switcher was added, giving the users the choice of opting between a light or a dark theme.
It is known that bright, white backgrounds on a screen increases eye strain, especially during lengthy periods of time. “Long-term reading in light mode,” according to this Nielsen Norman comparison of dark mode and light mode, “may be associated with myopia.”

Some people need larger text in order to be able to read and perceive letter shapes. Increasing font size is a common way to tackle this, ensuring there is no loss of content or functionality.
It’s important to give users an option though, as some people with tunnel vision and the majority of users with generally good visual acuity may prefer smaller letters in order to be able to see more words at a time.

The mobile version also shows some thought as the menu is easily accessible by being positioned in the bottom right corner.
It’s regarded that 90% of people are right-handed, with the remaining 10% being either left-handed or ambidextrous. This provides easier access to the menu, as you can easily reach it with your stronger thumb. 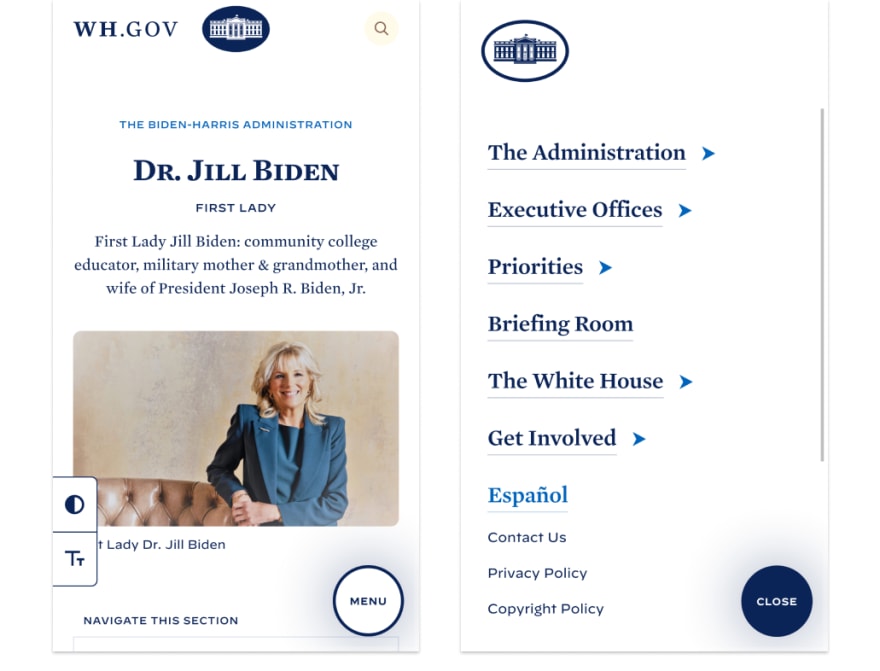 The US is home to 41m native Spanish speakers, according to census data - which results in 13% of its population. There are nearly 12 million bilingual Spanish speakers, making the US the second largest Spanish-speaking country in the world.
Back in 2017, Spanish was removed as a language translation on the White House website. There was a disclaimer stating the feature would be back soon, although that ended up being 4-year long wait! A Spanish version is now available, promoting inclusivity regardless of cultural background. 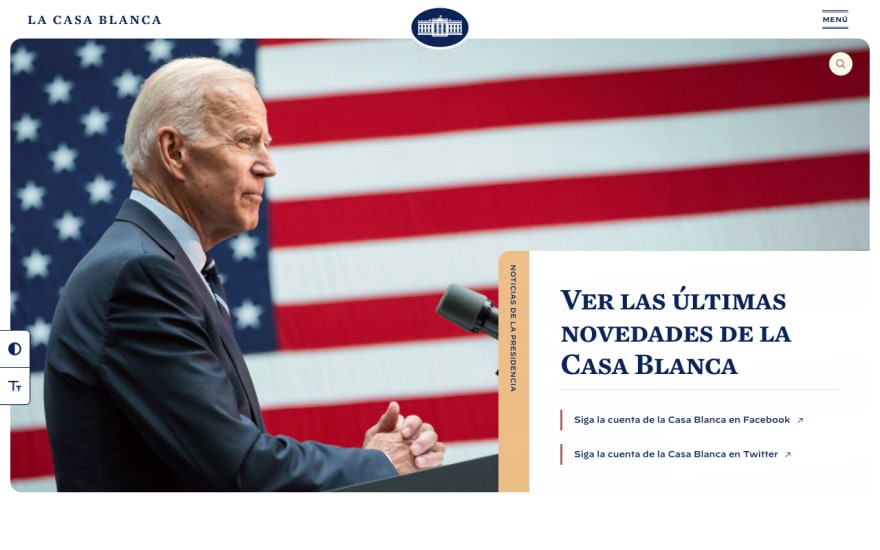 Accessibility Statement and eagerness to improve

A new accessibility statement was added stating that there is real commitment to make the White House website as accessible as possible to all Americans. “Our ongoing accessibility effort works towards conforming to the Web Content Accessibility Guidelines (WCAG) version 2.1, level AA criteria.”, they state.

What also stands out is the eagerness to improve. Having an open channel of communication with your actual users asking for feedback on accessibility shows a commitment to them. Quite a few options are offered as well, including for hearing impairment scenarios, which is great to see. 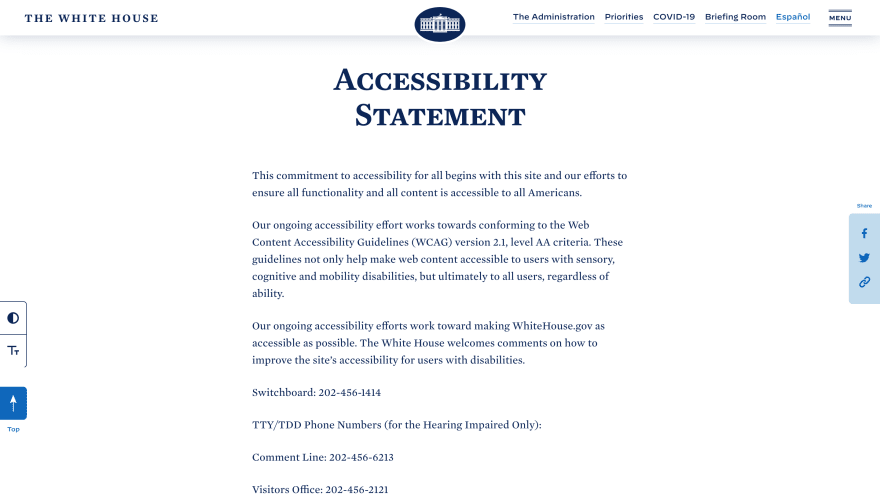 There are probably more accessibility features worth pointing out, though these are the ones I could identify at a glance.

Do mention in the comments if you manage to find more, especially for visually impaired users.

Disclaimer: By all means, this is not a political post. Only a case study on Whitehouse.gov’s new Web Accessibility stance.

How I want to get from a11y minded to a11y expert

Based on what you know: Name the 3 best companies to work for as a developer

Rita Correia
Hi there!👋 I'm Rita, an Agile digital project manager with experience in frontend engineering. I'm passionate about UI, product management and web accessibility.
What's your favorite piece of software that you built for yourself?
#discuss
Do you remember the FIRST project made by you?
#discuss #showdev #webdev #programming
A11Y 101: Analysing my website issues
#a11y #webdev #beginners