Typescript is the next big thing in the Front End Development domain and if you are looking to upgrade your skills from a junior to an intermediate frontend developer, then it is a must have skill.
Typescript is a a superscript of javascript, so if you know javascript you are already half way there! What Typescript brings to the table is more error-free code with type checking during run time and a code which can be easily documented.

This article is for developers who already know react and javascript and want to shift to typescript, so I won't be focusing on any react concepts. This is a crash course on understanding the basics of using Typescript with React.

We will be covering all the topics necessary for understanding the basics of using react with typescript.

In this article we will be building a simple personal watch list that records the movies you input by taking it's name, rating and review. It looks something like.(It is a little stylised but the underlying code is basic) 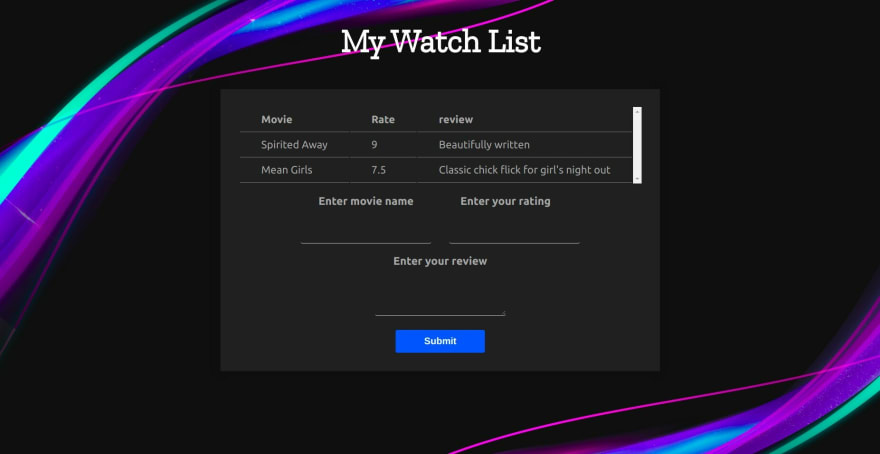 Github repo for the project

Online Demo of the Project

Okay now change directory to get into your project folder and proceed usually as you do with any react project.

Your code structure should be looking something like this 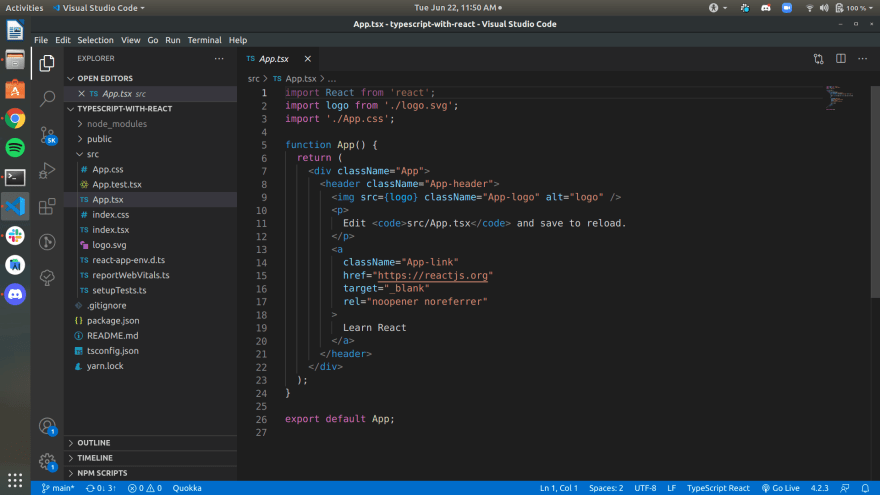 Notice how the files have .ts or .tsx extension. That denotes that those files are transpiled in typescript.
Okay now let's get into the Typescript nitty gritty!

In typescript it's necessary to mention type definitions of all variables and functions and what they return.

We have exported IState so that we can use it in another file later on.
An alternate inline method of adding state would be as follows :

Here the variable inputValue can either be a data type of number, string or even a null value
Note: null and undefined are not the same data types.

For handling props in react, both the sending and recieving side of the component should make a clear declaration of the type and number of variables or functions involved.Typescript will give an error if anything is missing either on the sending or receiving side

From App.tsx we are sending one object ie. form to List.tsx

In the second example, from App.tsx we are sending one object ie. form and one function ie.setForm to Form.tsx
Let's take a look at the Form component's recieving side now.

As you can see here in this component as well we imported IState under the alias Props, however we have made some customized changes here.

In react-typescript, you need to mention the type of output that function is giving. 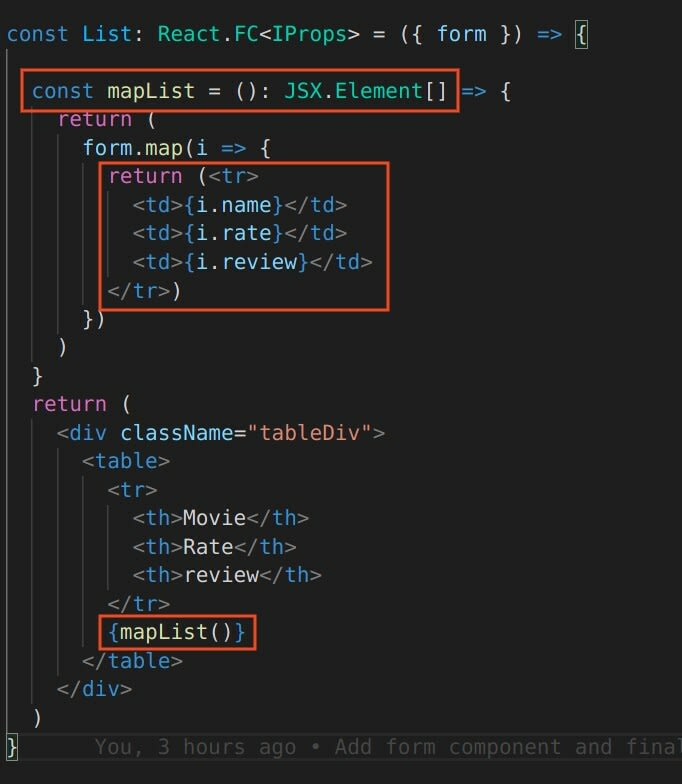 Protip: If you aren't sure what the return type is,hover over the function to know it's return type.

Alternatively if a function isn't returning anything, mention it's null return type as :void after parameters in this way :

For handling events with react typescript we will take a look at the following DOM events called by the following JSX elements in Form component:

Here the input tag has a DOM property called onChange which calls handleChange when an event is triggered.
For this we create a function which knows that it will be recieving an HTML element in parameters.

In the second example we will take a look at the onClick event called by the form submit button.

Similar to handleChange function the handleClick function takes a proper type definition of e which in this case is React.MouseEvent<HTMLButtonElement>.

That's it for this crash course! Hope this gives you a fair enough idea of how to use typescript in react. Keep learning and have a great day!

Introducing esbuild To Your Monorepo

Once suspended, riyanegi will not be able to comment or publish posts until their suspension is removed.

Once unsuspended, riyanegi will be able to comment and publish posts again.

Once unpublished, all posts by riyanegi will become hidden and only accessible to themselves.

If riyanegi is not suspended, they can still re-publish their posts from their dashboard.

Once unpublished, this post will become invisible to the public and only accessible to RiyaNegi.

Thanks for keeping DEV Community 👩‍💻👨‍💻 safe. Here is what you can do to flag riyanegi:

Unflagging riyanegi will restore default visibility to their posts.