Deno is a new JavaScript / Typescript runtime which aims to supercede Node.js, and with the the release of Deno 1.0 it is gaining more traction with developers. Personally I'm a big fan of Deno, I think it's a step forward for the JavaScript community, and I hope it succeeds.

I'm also a big fan of tests and Test Driven Development principles, as such I am pleased to see Deno like Rust and other languages has tests built in. With this post I aim to show you how to begin to write tests in Deno, and provide an honest appraisal of Deno's test tools so you are aware of the current pitfalls.

To begin you need to install Deno. Once this is done just run deno test in the command line and any test files you have will execute. You can also run specific test files by referencing them after the deno test command.

And you can run individual tests or groups of tests by using the --filter option which will run tests where the test name matches the filter pattern.

Take a look at the documentation to learn more on how to run tests in Deno.

Another great feature of Deno is it comes with TypeScript built in, so you get type checking out of the box. This also means Deno files can just be TypeScript files, and we can create test files by appending files with .test.ts. For example, person.test.ts will contain tests for our person module person.ts.

To write a test in Deno import the assertion you wish to use from the asserts module and then write the test in the required Deno format.

The assertions will throw an error if they fail, this will be caught and the error message will be outputted to the CLI. 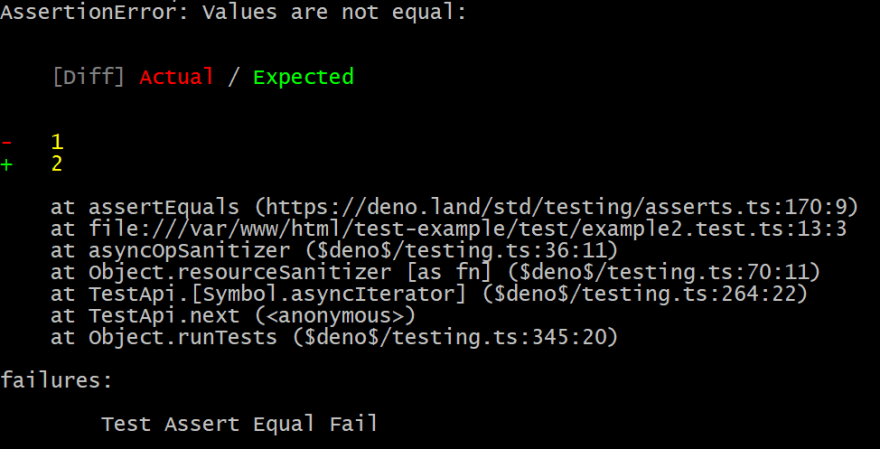 There is no concept of NPM, Node Modules or package.json in Deno, which is a good thing. Instead you import modules directly from local or remote locations within files. In this case we import the assert() method from the remote asserts module located at https://deno.land/std/testing/asserts.ts.

This is where things become a little hazy, and developers need to be careful. All of Deno's core features, including the asserts module, are held under the std namespace. And this namespace is currently unstable, as of writing we're on version 0.57. This means the test modules like the asserts module are not feature complete, will have bugs and are subject to change at short notice. My personal view is it is possible to write stable tests in Deno but there is more work to do in this area and developers should consider the lack stability before they write their tests.

The asserts module makes nine assertion methods available for use:

The assert method is a simple 'truthy' assertion and it's value is limited because numerous values will assert. This is not great if you're trying to write explicit and precise tests, but should be fine if you're writing something simple and generic.

There are three equality assertions available, assertEquals(), assertNotEquals() and assertStrictEquals().

The assertEquals() and assertNotEquals() methods are based on an internal equal method. This is a complicated method, it's cyclomatic complexity is 30, and it tries to provide a general equality check for JavaScript, which is no mean feat.

As the examples show it will assert numerous types, including objects.

The difference to assertStrictEquals() is the strict equality check will not assert two instances of identical objects as they won't be referentially the same.

Under the hood strict equals does a simple === check, there is no reference to the equal() method. This limits the scope of what assertStrictEquals() defines as equal, which is simpler, and makes things more precise and stable.

It should be noted neither assertion will handle the JavaScript float problem, both of these assertions will fail:

My overall feeling is the assertEquals() and assertNotEquals() assertions are focussed towards integration and functional tests. Also they need to be handled with care as they are based on complicated functionality, which has the potential to be buggy. If you are writing unit tests focused on pure business logic I would stick with assertStrictEquals() as it is a more precise and stable assertion.

There are two methods available to assert a thing contains a thing in Deno, assertStringContains() and assertArrayContains().

The assertStringContains() assertion does what it says on the tin. It does a simple includes check on a string to see if it contains the expected string. It's not complicated and will be stable and useable.

The assertArrayContains() assertion again does what you'd expect, it finds a value in an array. But in contrast to the assertStringContains() assertion it is quite complicated and contains nested loops which is concerning. I've noticed some bugs in the assertion, so you may experience unexpected behavior with this assertion.

You can assert regular expressions in Deno tests using the assertMatch() assertion. It is a simple assertion which does a basic RegExp test on a string. It's not complicated and does what you'd expect it to, so it will be stable and usable.

There are two ways to assert whether something throws an error in Deno, assertThrows() and assertAsyncThrows(). Both assertions allow you to check an error has been thrown, the type of error thrown and what the message was. This is pretty standard functionality available in most assertion libraries.

The assertThrows() assertion is relatively straight forward, the only complexity exists around how it handles the message checks.

The assertAsyncThrows() is a little more complicated, mainly because it deals with Promises. But basically it will catch thrown errors or rejections in Promises. And again most of the complexity exists around the message checks.

It should be noted recent changes have been made to both these assertions to genericise them which will make them more usable but may result in some stability issues in the near future.

Overall Deno tests are relatively straight forward to set up and begin using, which is a massive benefit compared to the config hell of Node and NPM test libraries.

There is though some work to be done in this area for Deno. It's fair to say some of the assertions are complicated and stability may be an issue in the near future. But overall it is a great start and a big step forward for testing within the JavaScript community.

My advice is if you are writing unit tests stick to the following assertions as they are precise and stable:

Use the remaining assertions if you are writing more general tests like integration and functional tests.

If you want more than the Deno standard assertions module has to offer I have begun work on an assertion library called explicitly. The library extends the standard Deno assertions with a collection of simple but explicit assertions. These assertions are geared towards developers who wish to write clear and precise unit tests in Deno.

* Recent changes have been made to these Deno assertion methods in terms of naming and implementation, please see the version history for more details.

Rob Waller
I am a developer with a passion for testing. I've been coding for 14 years and I want to share my experience and learnings with other developers to help them write better software.
How to Handle the Emergence of Complexity in Software
#architecture #javascript #php #typescript
The Code Maintainability Test
#maintainability #codemaintenance #javascript #php
Why You Must Always Follow Test to Break Principles
#tests #phpunit #testtobreak #php

Once suspended, robdwaller will not be able to comment or publish posts until their suspension is removed.

Once unsuspended, robdwaller will be able to comment and publish posts again.

Once unpublished, all posts by robdwaller will become hidden and only accessible to themselves.

If robdwaller is not suspended, they can still re-publish their posts from their dashboard.

Once unpublished, this post will become invisible to the public and only accessible to Rob Waller.

Thanks for keeping DEV Community 👩‍💻👨‍💻 safe. Here is what you can do to flag robdwaller:

Unflagging robdwaller will restore default visibility to their posts.