Awk is a small but capable programming language which is used for processing text. It was developed by Aho, Weinberger, Kerninghan at Bell Labs.

Julia Evans made an awesome intro to awk: 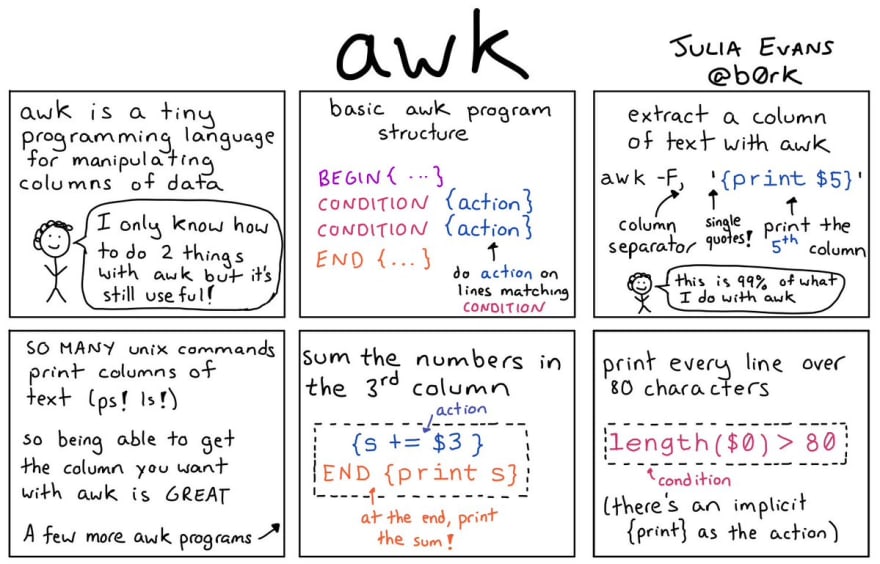 Awk scans input file as a sequence of lines and splits each line into fields. The field separator is usually whitespace but you can customize it to any character.

An awk program is a sequence of pattern-action pairs i.e for each line, it checks if it matches the pattern and if yes, it performs the associated action on the line. Awk can be used interactively or to run saved programs.

Here is what Awk does written in Python-like pseudocode:

Here are some small snippets of Awk:

You can run awk programs inline or through a file:

Alternatively, you can save this to a file hello.awk:

Then run it as awk -f hello.awk

2. Reading a CSV and printing a specific column

Let's now do something useful! Download this csv which is 2010 census data by zip code in Los Angeles city.

The -F, sets the field separator to comma as we need to split by commas for getting fields in a CSV file. $n allows you to use the value in the nth column.

Awk allows the use of variables and functions. Let's see how to use them by computing the total population in the entire city.

Variables are by default initialized to 0. Here, we use a variable s to hold the total.

Awk uses some special variables and functions to make your programs more compact:

Now, we will compute the average household size which is total population divided by total households. The columns of interest are $2 and $6.
We also want the average population per zip code. Our script:

NR gives us the total number of lines. But we do not want the header line. We can use tail command to skip the 1st line as tail -n +2. Running tail -n +2 2010_Census_Populations_by_Zip_Code.csv | awk -F, -f total.awk gives us :

We have done some useful things with awk so far, but we have ignored its biggest strength - pattern matching. We can match based on field values, regexes, line numbers.

There is a lot more to Awk. Here are some references:

Once suspended, rrampage will not be able to comment or publish posts until their suspension is removed.

Once unsuspended, rrampage will be able to comment and publish posts again.

Once unpublished, all posts by rrampage will become hidden and only accessible to themselves.

If rrampage is not suspended, they can still re-publish their posts from their dashboard.

Once unpublished, this post will become invisible to the public and only accessible to Raunak Ramakrishnan.

Thanks for keeping DEV Community 👩‍💻👨‍💻 safe. Here is what you can do to flag rrampage:

Unflagging rrampage will restore default visibility to their posts.