In the previous post, we went through rate-limiting and what it is. Then, we introduced an algorithm called Token Bucket and implemented it in Python.

I've decided to turn this into a series and dedicate each post to an algorithm.

And in this post, we will learn about Fixed Window and its implementation in Python.

As the name suggests, It's all about windows. In this algorithm, we divide the time into fixed windows and then map the incoming events into these windows.

The algorithm itself is pretty simple without any analogy but let's start with one anyway.

Imagine a moving train. There's a gateway and at any moment, people only can board one wagon (Yep, people are boarding a moving train, nothing weird).

Assume that the window of boarding for each wagon is 1 minute. So if a wagon gets full you need to wait for up to a minute for the next wagon.

In this analogy, the train is the time! The time is always moving forward and in each time frame, we have a fixed window of passing through. 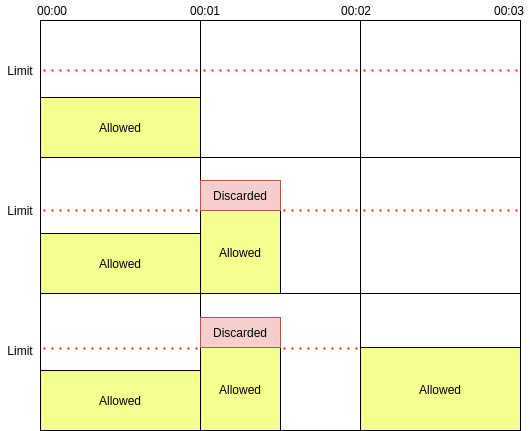 In this very simple implementation, We will build a rate-limiter that uses Fixed Window to limit packets in 1-second time frames.

We start by defining a class with 3 arguments when It's being instantiated.

We prefill a property named allowance to allow the packet to pass through in the first second.

current_time is the current time frame that the rate-limiter is using.

Then, we define handle() where the magic happens.

As you can see, Fixed Window is extremely simple. This is the final code:

In the code above, we built a rate-limiter with a rate of one packet per second. Then, we send a packet every 0.2 seconds to see the rate-limiter do its thing.

This algorithm is pretty useful to learn about rate-limiting but we rarely see it in the wild since it allows a burst of events at the beginning of the time frame but it really depends on your application.

Once unpublished, this post will become invisible to the public and only accessible to Amir Keshavarz.

Thanks for keeping DEV Community safe. Here is what you can do to flag satrobit:

Unflagging satrobit will restore default visibility to their posts.