The term "rate-limiting" is known to almost everyone who has worked with web servers. I think It's one of those subjects that we often just use and don't think about it. But I think knowing how rate limiting works is useful If you have ever used it.

As you may know, "rate-limiting" is basically monitoring the incoming requests and making sure they don't violate a threshold. Basically, we define a rate of requests per time-unit and discard packets of a stream that is sending more packets than the one defined in our rate.

You probably noticed that I used the word "discard" when our threshold is reached. That's not always the case. In a lot of cases, we put the packets in a queue to keep the packets at a constant output rate. (And packets won't be discarded.)

What we'll be discussing doesn't require a queue and I dare say It's probably the simplest way to implement rate-limiting.

The most famous ways of implementing rate-limiting (Traffic Shaping) are:

The Leaky Bucket is somewhat similar to the Token Bucket but right now we don't care about the constant output rate and Token Bucket is the only algorithm we will talk about.

The Token Bucket analogy is very simple. It's all about a bucket and tokens in it. Let's discuss it step by step.

That's it. Wasn't it simple? 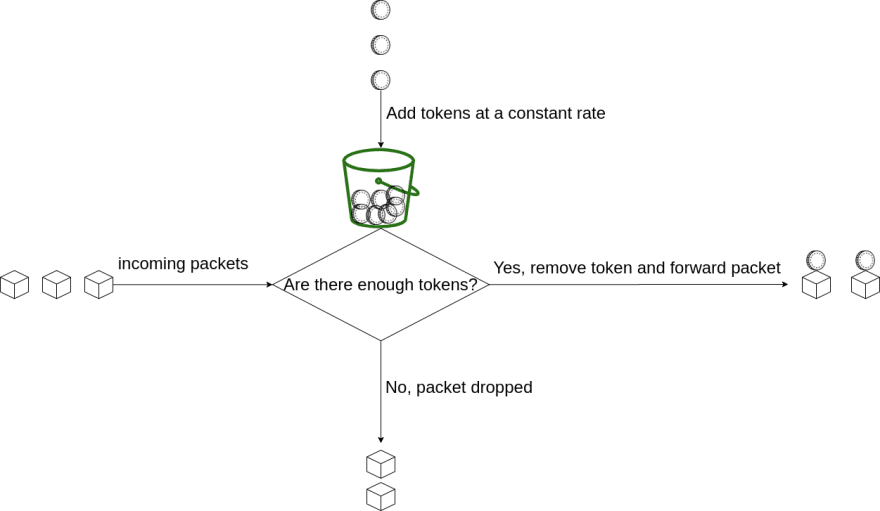 We start by defining a class with 4 arguments when It's being instantiated.

We also prefill the bucket with the given tokens. This allows for a burst of packets when the throttler first starts working.

last_check is the timestamp that we previously handled a packet. For initialization, we set the time when we created the bucket.

Then, we define handle() where the magic happens.

That's all. This is the final working version:

As you can see in the code, our rate is 1 packet per second. We also send a packet every 0.2 seconds. When we first send a packet it quickly empties the bucket and it takes some time for the bucket to be filled again and that's why 4 packets are dropped between each successful forward.

Rate limiting and traffic policing, in general, is a very vast subject so If you liked what you just read, there are many materials available online about this subject that you can use to have a much deeper understanding of traffic policing.

Once unpublished, this post will become invisible to the public and only accessible to Amir Keshavarz.

Thanks for keeping DEV Community 👩‍💻👨‍💻 safe. Here is what you can do to flag satrobit:

Unflagging satrobit will restore default visibility to their posts.