The first move towards releasing software is the build stage. This practical guide will show you the general principles of build automation and reference implementations using Semaphore. Optimizing your build stage will accelerate your development workflow and cut down costs.

What happens in a build stage

In continuous integration (CI), this is where we build the application for the first time. The build stage is the first stretch of a CI/CD pipeline, and it automates steps like downloading dependencies, installing tools, and compiling.

Besides building code, build automation includes using tools to check that the code is safe and follows best practices. The build stage usually ends in the artifact generation step, where we create a production-ready package. Once this is done, the testing stage can begin.

We’ll be covering testing in-depth in future articles (subscribe to the newsletter so you don’t miss them). Today, we’ll focus on build automation.

Build automation verifies that the application, at a given code commit, can qualify for further testing. We can divide it into three parts:

The result can be a binary file, a code tarball, an installable package, a website, a container image — the main thing is that we have something that we can run and test.

Programming requires discipline. We must solve hard problems while following good practices and abiding by a common coding style. Automated analysis tools help you keep out gnarly code at bay. In general terms, there are three classes of code analysis tools:

Since no one wants to ship unsafe or buggy code, we must design a CI pipeline that stops when errors are found. When the CI pipeline runs the right code analysis tools, developers who review code can focus on more valuable questions such as “Is this code solving the right problem?” or “Does this code increase our technical debt?“.

Step 3: Preparing your Application for Release

The released package will include everything needed to run or install the application, including:

The final package can be published on a website, in a package database such as npmjs.com, in a container registry, or can be directly deployed into a QA or production environment.

A CI/CD pipeline consists of blocks and jobs. In Semaphore, jobs are where your commands and code run, so it’s here where we define the commands for each step in the build stage. While setting up build automation, you’ll find the following Semaphore commands useful:

How to implement a build stage with Semaphore

Shall we see a few practical examples of build automation in a CI pipeline? Let’s roll up our sleeves and write some code.

But first, a note about how I’m writing the commands:

👉 Jump to the example that interests you the most:

Java is a compiled language, so the build stage must compile the source into JVM bytecode. Here’s a starter pipeline:

A Java build stage. Linting and code analysis run in parallel in the same block.

The leading popular build tools in Java are Apache Maven and Gradle, both are included in Semaphore’s machines. Let’s go with Maven; it handles dependencies and compiles the source with a single command: mvn compile. Use these commands in your CI job to build the application:

The cache command will detect the compiled output in the target directory and store it for future use. Ideally, you should set the environment variable MAVEN_OPTS to -Dmaven.repo.local=.m2, so downloaded dependencies are also cached. 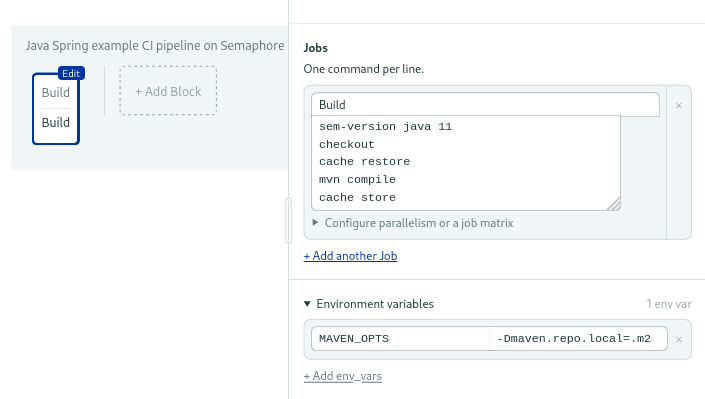 Setting up environment variables in the build block.

Java developers use powerful IDEs that lint code in realtime. Powerful as they are, they are not enough. Quality checks must also be part of the CI pipeline. We can use checkstyle to add a linting job.

These commands download checkstyle and run it on a file called MyFile.java:

Or, if you are using Maven, there’s a plugin for automatic linting. To enable it, add the maven.checkstyle.plugin to properties in your pom.xml.

Then configure the plugin to fail on error. Add the following snippet to the build section in your pom.xml:

Now you can run checkstyle with:

Another nice checker to use in your CI environment is PMD. PMD works with Java, JavaScript, and Oracle’s SQL. You can scan code with the default rules for Java with the following:

Infer was created by Facebook to find code that can lead to runtime errors, things such as race conditions and resource leaks. Infer works with Java and Android. Facebook has open-sourced this tool and uses it to fix their mobile client and the main Facebook app.

To run Infer on your CI, download the binary and build the application. Infer will output a report on the infer-out folder, which you can store for later analysis. The following command will make the pipeline stop when issues are found:

To use this tool, add this snippet to the plugin section in your pom.xml:

Then, create two files: spotbugs-include.xml and spotbugs-exclude.xml. The contents of the first one are:

You can exclude rules in the exclude file:

Commit the changes into your repository. Then, create a job that generates the report and pushes it to the artifact store:

We can generate a JAR file with: mvn package. Since we already tested the application, we can skip tests.

The output JAR is uploaded to the artifact store, where it can be downloaded or used in continuous delivery and deployment pipelines.

👉 For a complete example of setting up a CI/CD pipeline for Java applications, see CI/CD for Spring Boot Microservices.

JavaScript code doesn’t need compiling. The build stage will only download dependencies, then lint the code, and finally, build a package.

We can install JavaScript modules with npm:

The npm ci command creates a clean copy of the node_modules folder. Unfortunately, as a result we can’t use the cache at this stage. npm ci is the cleanest and safest way of installing modules.

But if you want or need to use the cache, you’ll need to run npm install instead of npm ci:

If the project includes a .nvmrc config file, you can replace sem-version with nvm use:

Linting with ESLint and JSHint

JavaScript has come a long way since the Netscape years. It grew from a language whipped up in less than ten days into the closest thing we have to a lingua franca — almost all devices have JavaScript support.

As you can imagine, the language changed a lot over time, and not all its parts are good. Using a linter will help us stay away from the bad parts of JavaScript. In my experience, the ESlint and JSHint linters integrate very well into the CI environment. Any of these can be installed with npm install --save-dev.

For ESLint, you’ll need to create a configuration with:

Next, add it to the script section of package.json:

After committing the changes, use the following to run the linter:

Security audits are built-in npm. You can check your dependencies with npm audit. Note, however, that you must set a threshold level in order for the command to fail on error:

An alternative to npm audit is AuditJS. This tool uses the OSS index of vulnerabilities, which feeds from many security databases, so results are more accurate.

You can add AuditJS to your project with:

Then use the following command to run the test:

One nice feature AuditJS has is that it allows us to whitelist security issues. This is great, for instance, when we want to ignore a vulnerability because we know it doesn’t affect us.

For that, create a JSON file detailing the vulnerability ID and a reason for ignoring it:

Then run AuditJS with the whitelist enabled:

Use npm pack to create a tarball you can distribute, or use npm publish to upload the module to npmjs.com.

👉 For a complete example of setting up a CI/CD pipeline for a JavaScript application, see How To Build and Deploy a Node.js Application To Kubernetes or Continuous Integration with Deno.

We don’t need to run any compile commands in Python. As a result, the build job, like JavaScript’s, will only download and cache dependencies.

In this example, we run pip to install the project dependencies in the .pip_cache folder:

Like most linters, Pylint can be integrated into the IDE. But, in this case, we’ll use it in the pipeline to check commit quality. To show lint errors in a single package or file use:

You can scan every Python file in the repository with the following command:

One thing PEP 8 style guide cannot capture is cyclomatic complexity, a measure of how many independent paths there are in the codebase. To calculate it, you can use a tool like Xenon.

To get started with Xenon, add it to your Python project with:

Xenon uses a ranking system that goes from A to F, where A is the lowest complexity level. In the job, you can supply the minimum level permitted before failing.

Python’s package format allows you to upload modules to the official PyPI index or distribute it on your website.

To create a package, use the following commands:

👉 For a complete Python pipeline see Python Continuous Integration and Deployment From Scratch.

Docker is a container platform that standardizes build automation by letting us package any software regardless of the language. By building a Docker image, we get a portable application we can run on any machine, as long as it has a container runtime installed. It also allows us to run the application at scale on orchestration platforms like Docker Swarm or Kubernetes.

Semaphore includes everything you need to build a Docker image. You only need to supply a Dockerfile with the build instructions.

The easiest way of writing a Dockerfile is by starting from a base image. Semaphore provides images for popular languages in the Semaphore Container Registry. For example, this Dockerfile is for packaging a Python application:

Use these commands in the CI job to build the image:

It works, but the image is lost as soon as the job completes. We must upload it into a registry in order to keep it. And for that, you have to supply login information for an image registry with a secret.

To create a secret, click on your account badge on the top right corner and then Settings.

Where to find Settings menu.

Create a secret called dockerhub with your Docker Hub username and password: 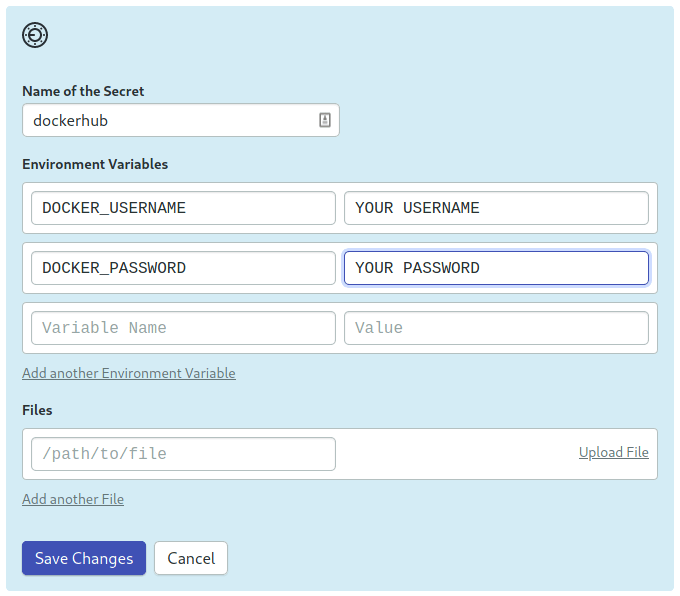 Next, you can pull the last image to speed up the build process:

Finally, build and push the image:

The complete job commands are:

Don’t forget to activate the secret in your job:

Activate the secret in the block

What we have seen are the basic building blocks for a Docker image. The process is mostly the same for any language. The only thing that changes are the contents of the Dockerfile. We have a few in-depth tutorials and example Dockerfiles for you to peruse below:

We learned what build automation is and saw a few examples. The principles always remain the same, regardless of the language or framework used.

The principle used in all examples is that the build stage runs in a pipeline. By running fast code checks right after compilation— and before the automated test suite—you optimize your continuous integration process for fast feedback.

I hope these recommendations help you optimize your build process. Happy building!

Everything you need to know about Generators in JavaScript 🚀