After reading this blog post you will have an overview of why we need encryption as a service. Also, we will implement a PoC using Python and Hashicorp Vault to apply what we just learned.

Nowadays there are companies that deal with sensitive data such as banking or health information. This means that in the case of a security breach, the company could have legal, financial, and bad PR repercussions. As a result, there are some industry standard guidelines for storing this type of data (eg. Payment Card Industry Data Security Standard). For example, when it comes down to store Credit Card Data, organizations are required to encrypt the account numbers stored in databases.

While encryption at rest can be seamlessly be done by using a cloud provider, handling the data when it’s moving around services can be tricky. Yes, you can use a secure communication channel (eg. TLS) between services, but this is not enough. One thing that could go wrong, even when using TLS, is logging sensitive information by mistake. This can happen even to companies that are worth billions of dollars and with an awesome engineering team.

Handling encryption at the application level

This is possible since there are good cryptographic libraries out there. However, developers should do the implementation in a correct way (eg. not using deprecated ciphers).

Furthermore, while a company might be running a Majestic Monolith, chances are that you have other services that interact with your main service. This leads to questions such as:

The solution is to protect sensitive data with a centralized key management system. This can be done using Hashicorp Vault, AWS KMS, Google CMK, etc. The idea is to delegate the responsibility of encryption and decryption to this service. Using a solution like Hashicorp Vault, allows you to encrypt and decrypt application data with an HTTPS API call. This means that: 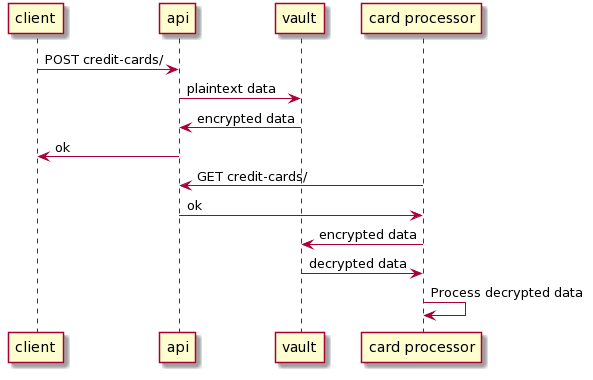 You can find the source code here.

As you can see we have 3 services:

This application allows you to create a "credit card" with a name and a PAN (primary account number). All data is stored encrypted and API doesn't know anything about the type encryption used or how to decrypt it.

This service process the credit cards we have created so far according to the business logic. Just as with the API, it doesn't know anything about encryption or decryption.

Just do docker-compose up --build and you should be ready to go.

Grab the token from the output value and put it as VAULT_TOKEN env var in:

Send a POST request to http://localhost:8000/credit-cards/ with the following body:

If everything went well you should receive the the encrypted Primary Account Number (pan).

If you do a GET request to http://localhost:8000/credit-cards/ you will still see the encrypted PAN field.

We should be able to see that the card was successfully decrypted and processed:

To minimize the risk if a key is leaked, let's tell Vault to rotate it.

If we do another POST request to the credit card application, we will see that we used v2 to perform the encryption.

Let's do a GET and see our different encryption key version (v1 and v2):

Let's go back to the card_processor.py service. Now we are able to decrypt and process both entries. One was decrypted with v1 and the other one with v2.

Voilà. Encryption keys and rotation were handled by Vault.

Are we production ready yet?

I don't think so.

Do you want to deal with a self-hosted open source solution or would you rather deal with your respective cloud provider’s solution?

If you want to discuss or challenge the implementation I’m happy to do so. Just leave a comment or find me on twitter.

Pivoting with SSH in CTFs

Once suspended, sergiodn will not be able to comment or publish posts until their suspension is removed.

Once unsuspended, sergiodn will be able to comment and publish posts again.

Once unpublished, all posts by sergiodn will become hidden and only accessible to themselves.

If sergiodn is not suspended, they can still re-publish their posts from their dashboard.

Once unpublished, this post will become invisible to the public and only accessible to Sergio Díaz.

Thanks for keeping DEV Community 👩‍💻👨‍💻 safe. Here is what you can do to flag sergiodn:

Unflagging sergiodn will restore default visibility to their posts.