React 18 sets the foundation for concurrent rendering APIs that future React features will be built on top of. This release focuses on performance improvements and updating the rendering engine.

How to upgrade to React 18

In your index.js, update ReactDOM.render to ReactDOM.createRoot to create a root, and render your app using root -

Let’s say that we need to call two people - Alice and Bob. In a non-concurrent setting, we can only have one call at a time - we would first call Alice, end the call and then call Bob. This is fine when calls are short but if call with Alice has a long waiting period (such as on-hold), this can be a time sink.

In a concurrent setting, we could call Alice and once we are put on hold, we can call Bob. This doesn’t mean that we are talking to two people at the same time, this means that we can have two or more concurrent calls at the same time and decide which call is more important.

Similarly, in React 18 with concurrent rendering, React can interrupt, pause, resume, or abandon a render. This allows React to respond to the user interaction quickly even if it is in the middle of a heavy rendering task. Before React 18, rendering was a single, uninterrupted, synchronous transaction and once rendering started, it couldn’t be interrupted.

React 18 features automatic batching. To understand batching, let’s consider the example of grocery shopping from the same React Working Group discussion . Let’s say that you are making pasta for dinner. If you were to optimize your grocery trip, you would create a list of all the ingredients that you need to buy, make a trip to grocery store, and get all your ingredients in one trip. This is batching. Without batching, you would start cooking, find out you need an ingredient, go to the grocery store and buy the ingredient, come back and continue cooking, find out you need another ingredient, go to the grocery store and drive yourself crazy.

In React, batching helps to reduce the number of re-renders that happens when a state changes, when you call setState. Previously, react batched state updates in event handlers, for eg:

As you can tell, this is not performant. React 18 introduces automatic batching which allows all state updates - even within promises, setTimeouts and event callbacks to be batched. This significantly reduces the work that React has to do in the background. React will wait for a micro-task to finish before re-rendering.

Automatic batching is available out of the box in React, but if you want to opt-out you can use flushSync.

Transitions can be used to mark UI updates that do not need urgent resources for updating. For eg: when typing in a typeahead field, there are two things happening - a blinking cursor that shows visual feedback of your content being typed, and a search functionality in the background that searches for the data that is typed.

Showing a visual feedback to the user is important and therefore urgent. Searching is not so urgent, and hence can be marked as non-urgent. These non-urgent updates are called transitions. By marking non-urgent UI updates as "transitions" , React will know which updates to prioritize making it easier to optimize rendering and get rid of stale rendering.

Updates can be marked as non-urgent by using startTransition. Here is an example of what a typeahead component would like when marked with transitions -

How is it different from debouncing or setTimeout?

New Feature: Suspense on the server

In a client-rendered app, you load the HTML of your page from the server along with all the JavaScript that is needed to run the page, and make it interactive. If, however, your javascript bundle is huge, or you have a slow connection, this process can take a long time and the user would be waiting for the page to become interactive, or see meaningful content.

For optimizing the user experience and avoiding the user to sit on a blank screen, we can use server rendering. Server rendering is a technique where you render the HTML output of your React components on the server and send HTML from the server. This lets the user view some UI while JS bundles are loading and before the app becomes interactive. For a detailed overview of client vs server rendering, check out Shaundai Person’s React Conf 2021 talk

Server rendering further enhances the user experience of loading the page and reducing time to interactive.

Now what if, most of your app is fast except for one part? Maybe this part loads data slowly, or maybe it needs to download a lot of JS before it gets interactive.

React 18 adds support for Suspense on server. With the help of suspense, you can wrap a slow part of your app within the Suspense component, telling React to delay the loading of the slow component. This can also be used to specify a loading state that can be shown while its loading.

In React 18, one slow component doesn’t have to slow the render of your entire app. With Suspense, you can tell React to send HTML for other components first along with the HTML for the placeholder, like a loading spinner. Then when the slow component is ready and has fetched its data, the server renderer will pop in its HTML in the same stream. 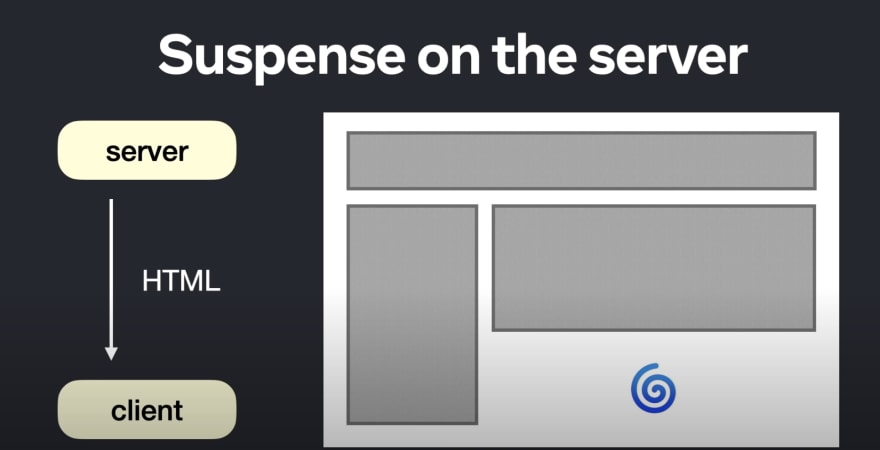 This way the user can see the skeleton of the page as early as possible and see it gradually reveal more content as more pieces of HTML Arrive. All of this happens before any JS or React loads on the page, thereby significantly improving the user experience and user perceived latency.

Strict mode in React 18 will simulate mounting, unmounting and re-mounting the component with previous state. This sets the ground for reusable state in the future where react can immediately mount a previous screen by remounting trees using the same component state before unmounting. Strict mode will ensure components are resilient to effects being mounted and unmounted multiple times.

If you enjoyed this article, give it a ❤️ so others can find it too.

Once suspended, shrutikapoor08 will not be able to comment or publish posts until their suspension is removed.

Once unsuspended, shrutikapoor08 will be able to comment and publish posts again.

Once unpublished, all posts by shrutikapoor08 will become hidden and only accessible to themselves.

If shrutikapoor08 is not suspended, they can still re-publish their posts from their dashboard.