Who doesn't want their web apps to perform flawlessly across all web browsers i.e be cross-browser compatible! But with more and more new features coming to JavaScript, many old browsers now do not have support for all of them.❗💀

Polyfills is the solution to the problem.🌈✨

What is a Polyfill?

Polyfill is a piece of code that is used to bring support for newer features in older browsers that currently do not have native support for these features.
For example, suppose JavaScript releases a new function, say x as a part of their language iteration. Now some older browsers might not have support for this function. But we developers would want our apps to be cross-browser compatible. Polyfills help us in making this possible with custom code.👨‍💻

Note📝- To code the polyfill for any feature, one must first be aware of the internal workings and specifications of the same.⚙

For the sake of this blog we would be coding polyfills of three higher-order functions which were added to JavaScript as a part of ES5, namely map(), filter() and reduce().

❌ Disclaimer - By no means should this be considered a guide to using the aforementioned higher-order functions.

That being said, take a look at the following image for a refresher of these functions if you're feeling a bit rusty. 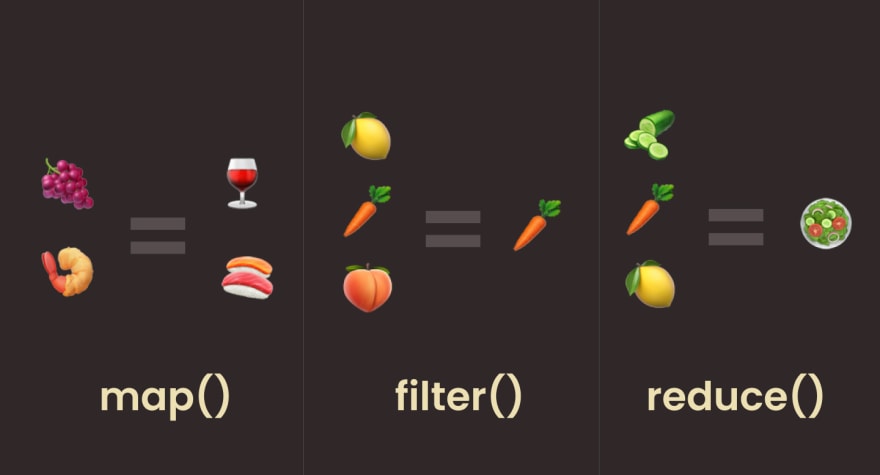 Let's look at the following code. The code here is for -

Take a look at the following code.

👉Steps to code the polyfill for map -

Let's put our customMap to the test.🚀🚀 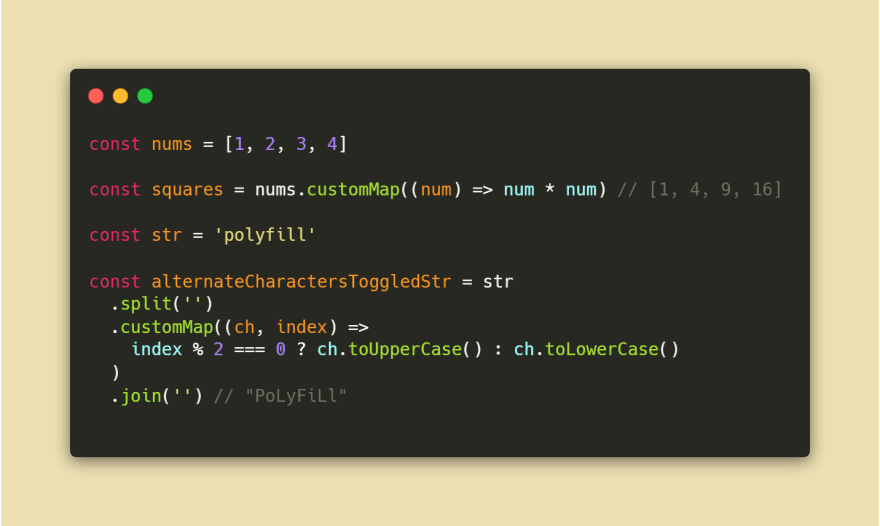 Our polyfill passed the test i.e it yields the same results as the original map function.✅✅

Next, let's move to the filter function.

The filter() method creates a new array with all elements that pass the test implemented by the provided function. - MDN Web Docs

Let's look at the following code. The code here is for -

Now, time to code the basic polyfill for the filter function.🌈

Look at the following code for better understanding.

👉Steps to code our filter polyfill -

Similar to the above, let's put our customFilter to the test.😅

Our polyfill for filter yields the same result as using the inbuilt filter function!!✅✅

We've almost reached the end of the blog.🏁 Next, we would quickly cover the reduce function.

The reduce() method executes a user-supplied “reducer” callback function on each element of the array, in order, passing in the return value from the calculation on the preceding element. The final result of running the reducer across all elements of the array is a single value. - MDN Web Docs

Let's look at the code below. The code here -

Let's try and write the basic polyfill for reduce function.

✔Recommended - First try on your own and then proceed to the code below.

Let's try testing whether our polyfill code works or not!

Awesome!! 🎉🎉 This also yields the same result as before.

If you made it this far, pat your back. You're awesome!🌈🚀

The name Polyfill comes from the name of a product used to cover cracks and holes on a wall, called Polyfilla. The term was coined by Remy Sharp while writing his book "Introducing HTML5" back in 2009.

📕Can read more about this - here

Congratulations!! 🎉🎉 You made it till the end. If you're still here chances are you probably liked the blog.

I am still learning Polyfills. Hope this blog gave you a decent introduction to what they are.

Do let me know how you liked the blog and where I need to improve. Would be eagerly waiting for feedback!🙂

Once suspended, suryaraj1 will not be able to comment or publish posts until their suspension is removed.

Once unsuspended, suryaraj1 will be able to comment and publish posts again.

Once unpublished, all posts by suryaraj1 will become hidden and only accessible to themselves.

If suryaraj1 is not suspended, they can still re-publish their posts from their dashboard.

Once unpublished, this post will become invisible to the public and only accessible to Suryaraj Bhaduri.

Thanks for keeping DEV Community 👩‍💻👨‍💻 safe. Here is what you can do to flag suryaraj1:

Unflagging suryaraj1 will restore default visibility to their posts.