Let’s first talk about what memory is. Memory can be thought of as a series of slots. 32-bit memory has 32-bit slots and 64-bit memory has 64-bit slots. The size of a computer’s memory can be quite large. For example, on my Mac, the size of the memory is 8 gigabytes. Each memory slot (more commonly referred to as address), is numbered. Memory 8 gigabytes large with 64-bit slots is numbered 0 to 8,000,000,000 each at intervals of 8 bytes (64-bits).

Diving a bit deeper, what does a specific process’s memory address space look like? There are a couple important sections in a program’s memory and they are: the stack, the heap, the code, and the data. At the bottom is the text segment, this is where the code lives. Above that is the data segment; variables that are global or static live here. Above that is the heap segment. This is where data allocated at runtime using the malloc call in C, for example, is located. The heap grows upwards, memory is allocated at the bottom first and grows to the top. Conversely, the stack is above the heap and grows downward. The stack area is used for local variables that exist only during the duration of its scope and are automatically free’d when the scope is exited. 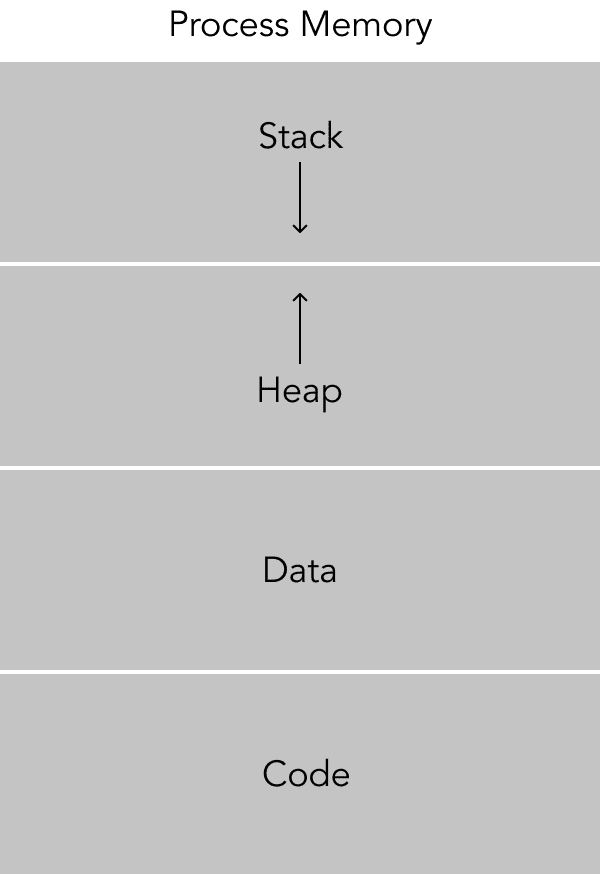 It’s important for a process to have the illusion that it has a contiguous address space. If it doesn’t, then pointer arithmetic can not happen and we wouldn’t be able to allocate memory larger than a word at a time. A programmer needs a consistent view of memory to them to be able to write code that performs deterministically. For example, the program needs to know that the calling function’s stack is above the callee function’s stack. Otherwise, when exiting the scope of a function, the programming language wouldn’t know where to go to find the next instruction.

One way to give programs a contiguous address space is by dividing up the computer’s total available memory (or RAM - random access memory) into a fixed number and giving each process one of these chunks. 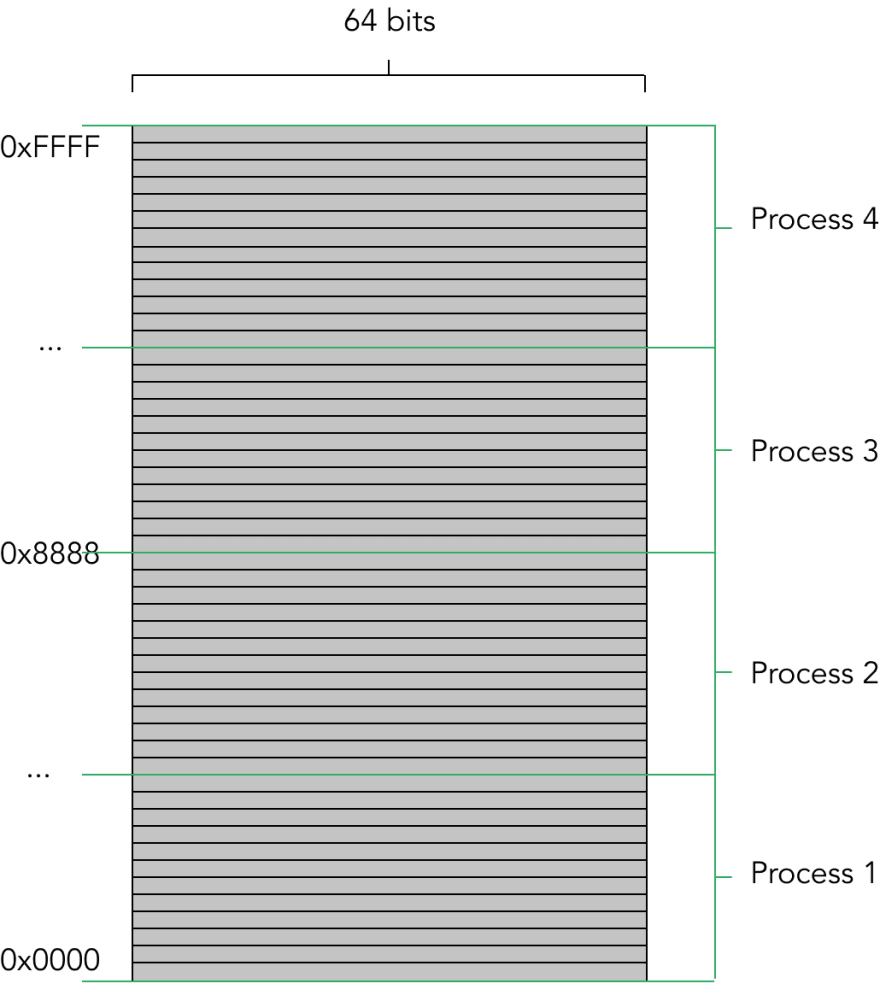 The obvious downside of this approach is that we may only be able to have a fixed number of processes running at a particular time. For example, if I divided up my computer’s 8 gigabytes of RAM into 1 gigabyte per process, then I would only be able to have 8 processes running simultaneously. The 9th process wouldn’t have a chunk of memory readily available to it! Additionally, there will be a large amount of wasted memory since all these 8 processes would likely not use up the entire address space.

Let’s see how this might work in practice. Let’s say a user process wants to allocate some memory at address 0x00. The CPU attempts to access the address 0x00 by first looking for a translation in the TLB. Because this is the first time the program is attempting to access 0x00, it doesn’t find any entry for 0x00 in the TLB and it jumps to execute instructions in the operating system. The operating system then checks to see if the process can still allocate memory (it is not at its memory limit). If it does, then it finds a memory address that is unused by any other processes. To do this, the operating system needs a mapping of memory addresses to whether it is available or not. Once the operating system finds an available physical address, lets say 0x10, it fills the TLB with the virtual address to physical address mapping 0x00 -> 0x10. Then, it will resume the execution of the CPU instruction. The next time the CPU wants to read the data at virtual address 0x00, the CPU looks it up in the TLB and finds the physical address is 0x10 and is able to pull the value correctly.

Is there a way we can use memory a little bit more efficiently so we don’t lose half of it to operating system accounting overhead? Yes, there is actually! What if instead of a one-to-one mapping of physical address space to whether it is free or not, we map things in larger chunks. For example, if we have a chunk size of 256 addresses, then we would have one entry in memory representing whether addresses 0 - 255 are free, another entry representing if addresses 256 - 511 are free, etc… What is the space complexity of this scheme? Instead of having to reserve half our memory for a virtual address to physical address mapping, we spend 1/256 the amount of memory on it. This is a huge win and the chunk size parameter can be tuned! I call this a chunk but it is more commonly referred to as a page and the technique referred to as paging. Let’s see an example of how all this works.

Let’s say that our program wants to access memory address 0x0110 (address 272 in decimal). If our page size is 256, then the TLB will use the last two bits as an offset into the page, and the remaining bits to find the virtual to physical page mapping.

The TLB will take the physical page frame and append the offset to generate the physical memory address that the program will find the data the CPU is requesting.

Great, we now have an efficient way of giving processes the illusion that it has a contiguous address space and access exclusive access to physical hardware when it really doesn’t! The next thing we need to worry about is memory isolation between processes.

What’s stopping a malicious process (or a buggy process) from accessing an area of memory that it isn’t allocated? Easy! We can re-use the address translation mechanism for creating a contiguous address space. In the TLB, we can include data about the active process. If the active process running an instruction doesn’t match the TLB entry, then the CPU will trap and execute a SEGFAULT signal handler into the operating system.

So...are we done? Is that what all modern operating systems do? Nope, one more question! Our computers are not limited to a fixed number of processes, so how do they do it while still providing memory isolation between processes? The answer to this is demand paging. Demand paging was an invention during the multi-programming era of the operating system initially invented by the Atlas operating system. The trick is: we can store the memory chunk of a process that isn’t running to disk. When this process requests the memory again, the operating system swaps it from disk and back into memory. We’re effectively swapping out these pages of memory and putting it into disk when it is not needed and bringing it back when it is needed. We are now able to run many processes on the operating system without worrying about the specific number of allotted chunks.

These are the general principles behind how physical memory is virtualized by the operating system. If there is something you are curious to learn more about, feel free to reach out to me on Twitter or via email.

What are the internal workings of terminal commands?

Once suspended, thesystemsprogrammer will not be able to comment or publish posts until their suspension is removed.

Once unsuspended, thesystemsprogrammer will be able to comment and publish posts again.

Once unpublished, all posts by thesystemsprogrammer will become hidden and only accessible to themselves.

If thesystemsprogrammer is not suspended, they can still re-publish their posts from their dashboard.

Once unpublished, this post will become invisible to the public and only accessible to thesystemsprogrammer.

Thanks for keeping DEV Community 👩‍💻👨‍💻 safe. Here is what you can do to flag thesystemsprogrammer:

Unflagging thesystemsprogrammer will restore default visibility to their posts.