To understand how your laptop at home talks to Google’s servers in a galaxy far far away, you first need to understand how your laptop at home (or in a data center) talks to another computer located in the same physical location. To do that, all the computers must be connected in some way so that they can transfer signals to each other. Let’s assume that we’re only interested in wired connections at the moment.

One way to connect computers to each other is give all computers a direct connection to each other. Let’s say we have 3 computers, computer A would have 2 ports so that it can talk to computers B and C. 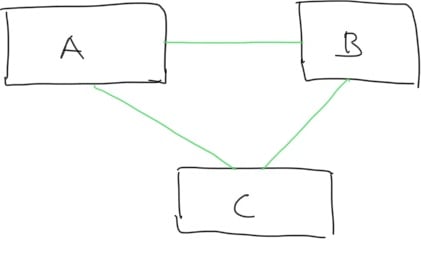 Doesn’t seem so bad, right? Well, let’s now think about a network with 100 computers. Each computer would need 99 ports. In total, that’s almost 10,000 ports for this network! Clearly, this model would only work at a small scale.

Another way to handle this is to have a centralized hub. All data sent by a computer is received by the hub. The hub then forwards all data to all the other computers connected to the hub. The intended computer receives the data and all other computers drop the data. Now how many connections do we need? For 100 computers on this network, we’d only need 100 connections! Each computer just needs to be wired to the hub and it will be able to communicate to any other computer on the network. This is known as the “star” network topology, when all computers in a network are connected to one central hub. 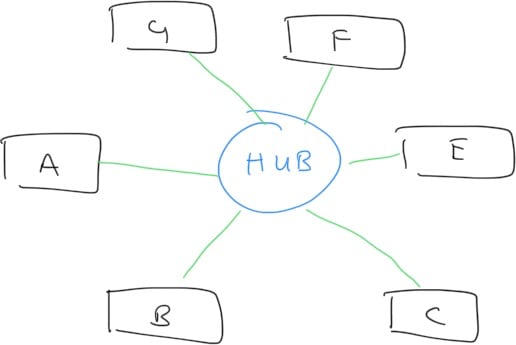 One downside of this approach, however, is each computer would be receiving data that is not intended for it. The hub doesn’t know anything about where its incoming data should be routed too, it only knows to forward all data it receives to all other computers on the network. This not only may be a security issue, but it also wastes bandwidth. We could be transferring data from computer C to D while computer A is trying to talk to computer B! The problem gets even worse as more computers are connected to the hub. For every additional computer connected to the hub, every sent message on the network needs to be sent to one additional computer. 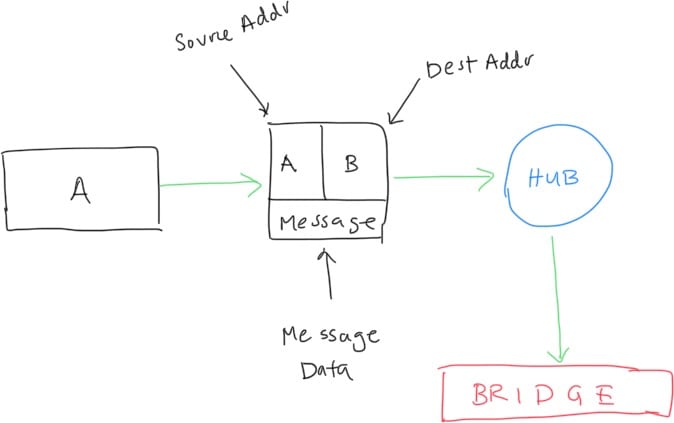 Now, I hate to switch things up on you, but everything we just discussed, that’s old tech! But, it’s important to understand that so you can appreciate what is used in modern networking. Introducing the packet switch!

The packet switch has mostly made the physical usage of bridges and hubs obsolete although the concepts that they were built upon are still used today. One thing you may have wondered is, why don’t we use the intelligence of a bridge knowing to forward messages or drop them in a hub. A packet switch has that functionality! It acts as a hub but is able to make smarter routing decisions which further reduces bandwidth consumption. When computer Z on Network 3, which is connected by a packet switch, wants to send a message to computer Y on Network 3, the packet switch forwards the message directly to computer Y instead of sending it to Computer X as well. It can do this because it has routing information and learns it in a similar way that bridges learn routing information. 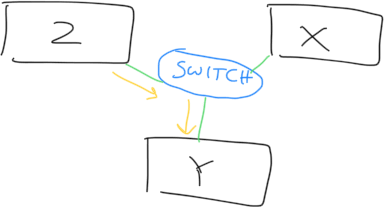 Packet switches take advantage of dedicated hardware that make the routing and forwarding calculation extremely fast. Because of this, they are generally more expensive than hubs and bridges.

20 Awesome Websites You Didn't Know About

Once suspended, thesystemsprogrammer will not be able to comment or publish posts until their suspension is removed.

Once unsuspended, thesystemsprogrammer will be able to comment and publish posts again.

Once unpublished, all posts by thesystemsprogrammer will become hidden and only accessible to themselves.

If thesystemsprogrammer is not suspended, they can still re-publish their posts from their dashboard.

Once unpublished, this post will become invisible to the public and only accessible to thesystemsprogrammer.

Thanks for keeping DEV Community safe. Here is what you can do to flag thesystemsprogrammer:

Unflagging thesystemsprogrammer will restore default visibility to their posts.