So, I'm making a Node - Express - Mongo server boilerplate to get the hang of it and I found out that Node now has support for es6 modules by default! :)

This post will go through the process of creating one such project with es6 support, eslint configuration and some hacks :P

This tutorial involves setting the --es-module-specifier-resolution=node\" flag in the command line of node, which is an experimental flag. This is the 'hack' mentioned above. This is done in order to omit the '.js' file extension while importing modules. However, if you are uncomfortable with experimental tags, you could either use '.js' extensions everywhere in the code or use Babel.

Having support for es6 modules means that you could do the following:

This breaks the monotony of require() and IMO, this is a much cleaner syntax. Earlier, if you wanted to do this, you had to

Note that although these statements are supported, currently they map to their require() and module.exports equivalents in node, so doing essentially the same thing as Babel, but with no extra dependencies.
Also, using import and export is the correct way forward, because at some point of time in future, node is going to adopt this way of using modules and not completely relying on require().

Also, did I mention that using import and exports is faster than require() ? :)

This tutorial will guide you in making a simple, barebones node app with es6 support. I will not be including any other stuff like express, extra dependencies etc. for the sake of simplicity.

Do a npm init to get the basic package.json:

Now, we need to add a few things to package.json: 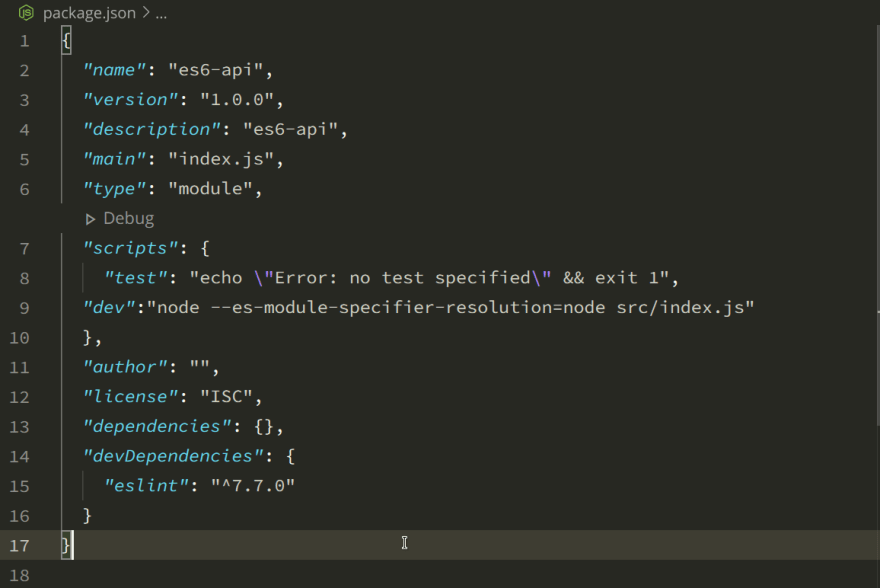 Answer all the questions according to your choice. Make sure to set the option 'What type of modules does your project use?' to 'esm'. These were my choices, but yours might differ: 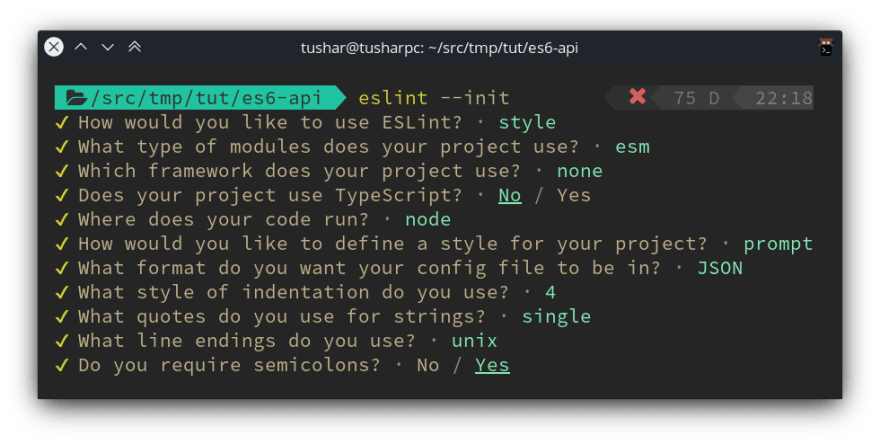 It will write the config to .eslintrc.json in the root dir and install a local copy of eslint in the node_modules directory.

Open .eslintrc.json and you should see the config similar to this: 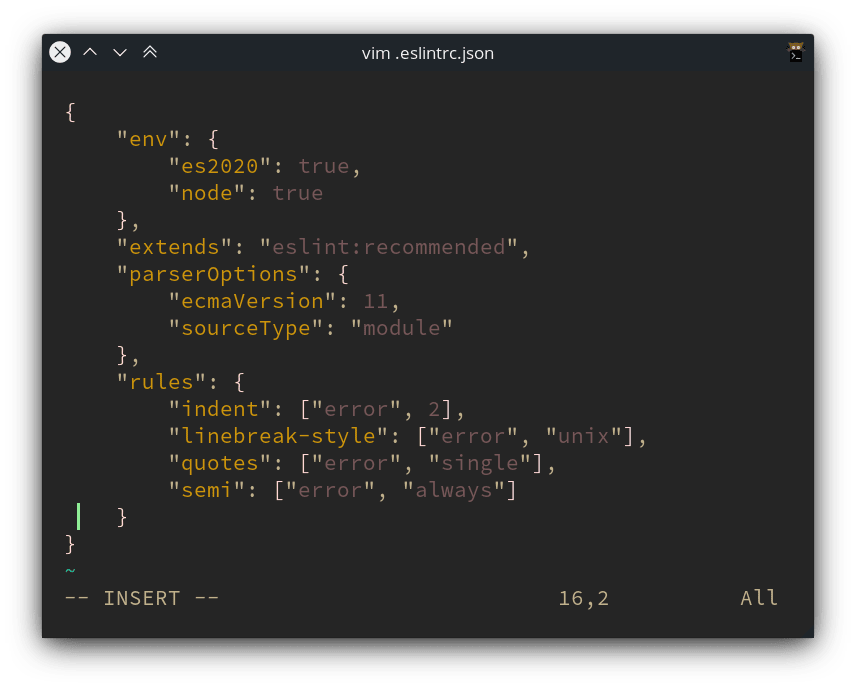 Now here, we need to make some changes to make eslint work with our esm setup.

First, add the line "es6": true to the "env" porperty value. Then, make a new property called "globals" and add the following line in it's value: "__dirname": true. This we'll come to this later in the code. 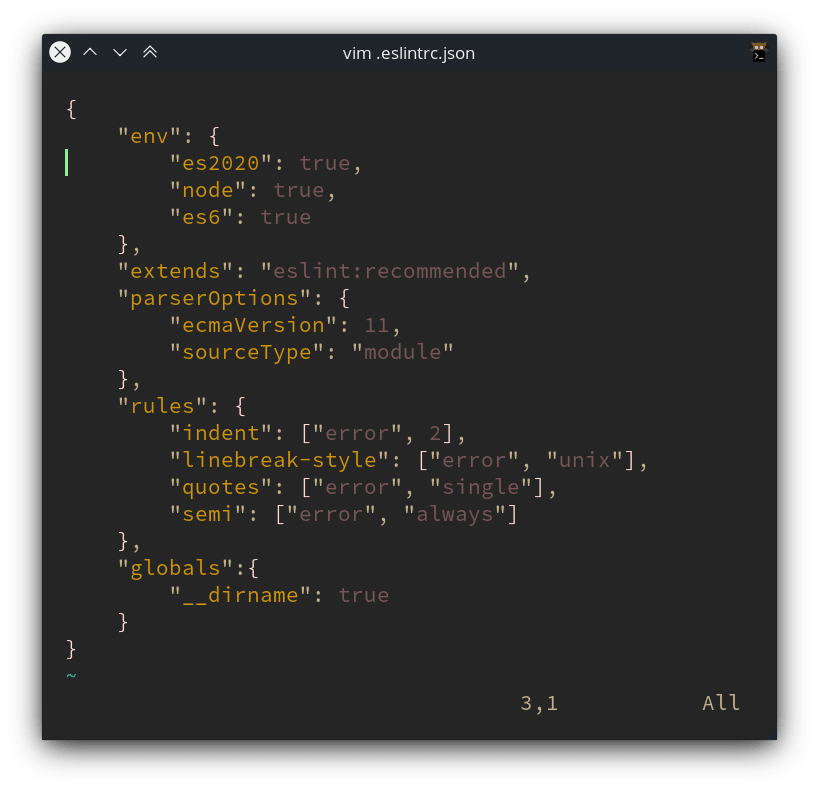 Now that eslint is setup, we can go ahead and edit the src/index.js file. Add the following code to it:

This code will do 2 things:

Now that our starter code is ready, return to the root dir and run npm run dev. You should get the following output: 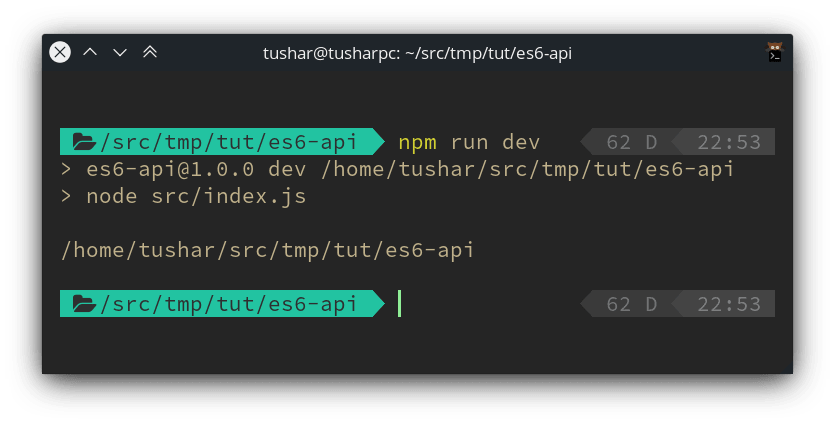 Let's look into making our own modules and exporting stuff.

Start by making a directory example in the src directory. Touch a file index.js inside it and add the following code:

We're making a module here and exporting value1 as a default export and value2 as a named export. We will also import these values in the main index.js.

Replace the code of src/index.js by:

Run npm run dev and you should see

That confirms that our es6 module was loaded successfully in node without using babel!.

You can go wild with esm by using await import(...), module-aliases, importing commonJS modules and much more, but I think that would be out of the scope of this article.

Also note that since import as of now is identical to require(), you can basically load data from a JSON file by writing await import('file.json').

If you liked this tutorial or have some suggestions, please drop a comment below. Thank you for reading. Bye and have a nice day.