Today, I'm going to tell about using the heapq module. As you probably know, the easiest way to find the largest element in a collection in Python is by using the max() method. Or min() to find the smallest one. But what if you need to find n largest or smallest items? The solution depends on how large this n is comparing to the overall size of a collection.

Let's start with simpler cases. Later on, I'm going to give you more complicated examples, including one that requires some out-of-the-box thinking.

If n is not about the same size as the passed-in collection, you might want to consider using the heapq library. It's equipped with nlargest(num, iterable) and nsmallest(num, iterable) functions, which are very easy to use. Let's see how they work on a list of numbers:

This will result in:

If n is almost the same size as the iterable, it's usually faster to just sort that collection and slice it:

The heapq example above was rather basic, but nlargest() and nsmallest() actually allow more complicated processing. The thing is that they can also accept a third optional key argument, which is a common parameter for a number of Python functions. key expects a function to be passed in (not a function call!), and this function serves as a comparison criteria that allows you to perform the operation on your own terms.

Let's try it on a list of dictionaries. We need two extract data on two world's largest cities, so we're interested in comparing their population only. To do that, we'll use lambda to specify that dictionaries with the biggest population number should be treated as the largest:

# 1: here, the nlargest() will iterate through the dictionaries contained within the cities list. For each dictionary, we'll use the population key's value to compare them. Otherwise, Python will throw an error, because it can't just compare two dictionaries.

Now, having the employees dictionary, let's find three members of stuff with the highest salary. The problem is that if you pass in a dictionary, you won't get the result you might expect:

In case you're wondering why we didn't get Andrew Evans, it happened because in Python 'b' is bigger than 'a'. So, we got the names that appear later in the alphabet. To get it all right, we need to specify a key function:

This time, we'll get the correct result:

If you'd like to print salaries as well, you can pass dictionaries' items and use lambda like this:

Now, let's have some fun! In the example above we retrieved a few highest-paid employees. The thing is, we didn't exactly get the names in alphabetical order, which is not very good for representation purposes. It's neater if Andrew Evans comes before, say Chris Evans in the output.

So, we still have to search for the highest salaries first, but if there's a tie, we need to compare the keys to put them in alphabetical order. For example, if you've got something like {'bread': 10, 'apple': 10}, you'll need to put apple first. As was mentioned earlier, the catch is that in Python:

So, if you simply use nlargest(), it'll fail to sort your keys alphabetically when there's a tie. You can use nsmallest() instead, but you're still going to need the highest salaries... What do we do about it?

This is where the key parameter provides us with an excellent solution. Using it, we can write our own sorting function that can practically redefine nlargest() or nsmallest() a bit to get us what we want.

# 1: We use nsmallest() here, so we can overcome the 'b' > 'a' constraint. So, in our final list we'll have, say, Adam before Bill. But we still have to pick the largest salaries...

# 2: And that's why we define our own sorting function that accepts a tuple as an argument, and returns it in reverse order (salary first, name second), and change the salary number to the opposite. For example, if we pass ('Susan Smith', 56000), we'll get (-56000, 'Susan Smith'). Why? So that nsmallest() can still find the biggest salaries instead of the smallest.

Remember that key only serves as a comparison criteria, it doesn't change the output. So, eventually, we'll get:

As you can see, we got the top four salaries first, but the names are placed in alphabetical order!

One more thing, the possible downside to this solution is that using heapq.nsmallest() is less intuitive if we're talking about searching for the largest salaries, and, hence, might be less readable. So, alternatively, you can opt for heap.nlargest(), but you'll need to update your sort_key() function:

Here, instead of changing a salary to the opposite, you change each character's ordinal number. And ordinal numbers is how Python really compares letters:

Now, let's have a real quick look under the hood of the heapq module. Underneath, the functions we've just learned convert passed-in data into a list where items are ordered as a heap (a special data structure). Let's see how it works:

heapq.heapify orders our nums list as a heap here, but it doesn't exactly sort it. The important feature of a heap as a data structure is that its first element (heap[0]) is always the smallest item. You can use this to easily access the next smallest item by popping it and heapifying the list again:

56 wasn't the third in the queue to leave our wonderful collection, but it got to the beginning as soon as it became the smallest number. Needless to say, it wouldn't have worked with the list method .pop(), because the point is that the list is being heapified after popping an item. It requires O(log n) operations where n is the size of the heap.

Now, you know how to use the heapq library. To sum it all up, I prepared a little cheat sheet for you. 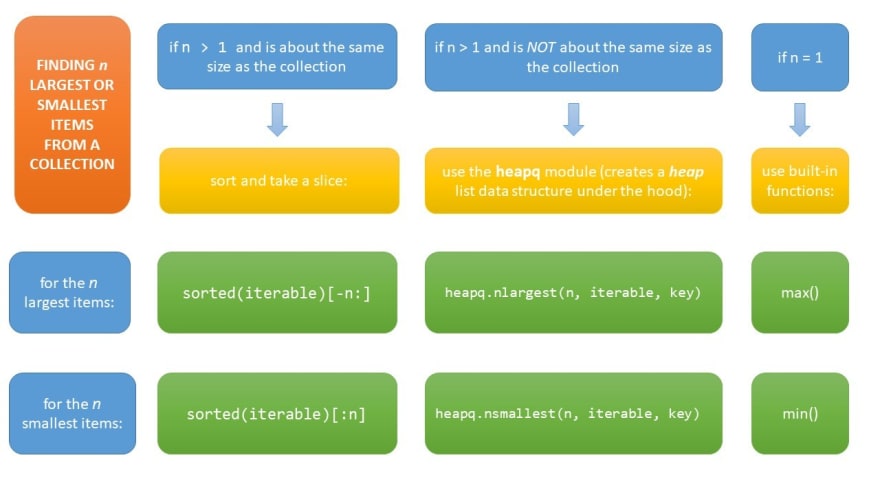 The Easiest Database you could ever need!

Vitaly Shchurov
My name is Vitaly, and I'm a Python Developer enthusiastic about programming, learning new things and writing about them. Feel free to contact me.
Python tips: playing with round()
#python #round
Python guide to using generators more
#python #generator #list
Python: how to 'reuse' a generator?
#python #generator

Once suspended, v_it_aly will not be able to comment or publish posts until their suspension is removed.

Once unsuspended, v_it_aly will be able to comment and publish posts again.

Once unpublished, all posts by v_it_aly will become hidden and only accessible to themselves.

If v_it_aly is not suspended, they can still re-publish their posts from their dashboard.

Once unpublished, this post will become invisible to the public and only accessible to Vitaly Shchurov.

Thanks for keeping DEV Community safe. Here is what you can do to flag v_it_aly:

Unflagging v_it_aly will restore default visibility to their posts.