The Sierpinski triangle is a famous mathematical figure which presents an interesting computer science problem: how to go about generating it. In this article I'll explain one method of generating the Sierpinski triangle recursively, with an implementation written in Vanilla JavaScript using HTML5 canvas. I'll also explain how to you'd go about downloading the contents of an HTML5 Canvas element as a PNG. 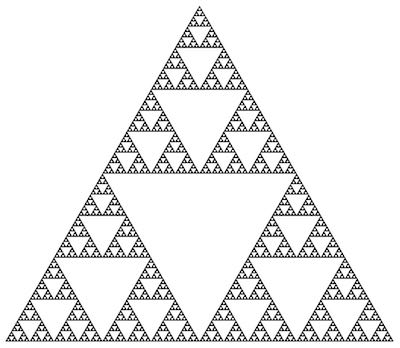 What is the Sierpinski Triangle?

The Sierpinski Triangle is a Fractal, Making it Naturally Recursive 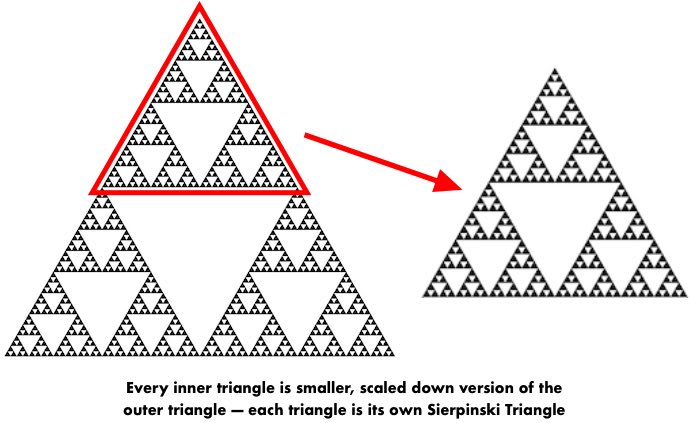 This property in which the Sierpinski triangle is made up of identical, scaled-down copies of itself makes it a fractal in mathematics. Fractals are shapes that are made up of scaled down copies of themselves. The Sierpinski triangle is actually arguably one of the most famous fractals that exist, along with Pythagoras Trees, the Mandelbrot set, and more.

The fact that fractals are made up of copies of themselves makes them naturally recursive, and it tends to be simpler to programmatically generate fractals recursively as supposed to using an iterative approach.

Generating the Sierpinski Triangle in JavaScript with HTML5 Canvas

Setting Up the HTML and Canvas Element

Let's start by setting up the canvas element and basic HTML markup:

Creating Equilateral Triangles on the Canvas in JavaScript

This function will take in two arguments: the position of the bottom left vertex on the triangle (pos), and the length of the sides of the triangle (sidelen).

To create polygons in HTML5 canvas, there are several functions to move to positions on the canvas, draw a path around an area of the canvas, and fill in that area. These include: 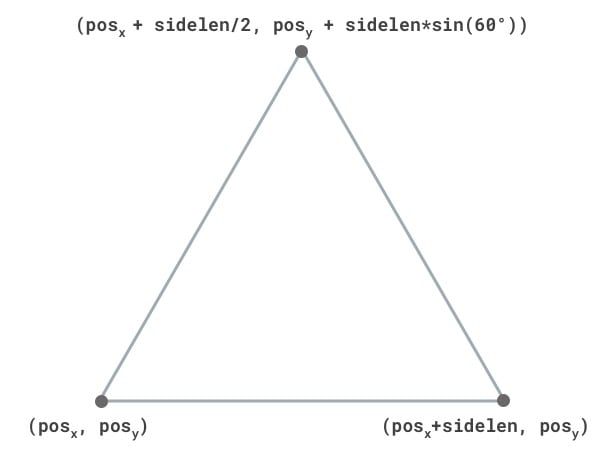 With the positions of the vertices done, here's what the function to create an equilateral triangle on the canvas would look like:

Implementing an Algorithm to Generate the Sierpinski Triangle

Now that the canvas and HTML has been set up and the createTriangle utility function has been written, we can start implementing an algorithm to generate the Sierpinski triangle.

Since fractals are naturally recursive, we'll use a recursive approach to generate the entire triangle.

To create this stopping condition, a variable called depth can be used. depth would represent the amount of times the program should continue repeating the fractal. depth should start at a certain value and decrease for every repeat, and every smaller Sierpinski triangle created. Once depth reaches zero (the base case), the program would stop and fill in the three triangles instead of continuing to repeat the fractal.

To create this functionality, let's create a function called createSierpinskiTriangle which takes the position of the Sierpinski triangle to generate, its side length, and the depth. The function should identify the positions of the three inner triangles, draw them if depth is equal to zero, or call createSierpinskiTriangle on the three inner triangles if the depth is greater than zero.

Try increasing the depth, and you should see that the triangle gets more and more detailed. Increasing the depth by one will result in three times the amount of total triangles to be drawn, so very high depths like 20 might not be performant since the canvas would have to draw 3^20 (~3.5 billion) triangles.

Downloading the Generated Triangle From the Canvas as a PNG

Now that we've generated the triangle recursively, one thing you may want to do is download the generated Sierpinski triangle as an image on your computer. Luckily, this is very simple to do in HTML5 Canvas.

First, the canvas must be converted to a data URL. If you're not familiar with data URLs, here's a simple definition:

A data URL is a URL scheme that allows data and files (images, audio files, etc.) to be respresented in a single URL containing all of the data. For example, if one wanted to include an image on a website, you would add the image to the web server and link to it in the HTML. With data URLs, the data URL contains the contents of the entire file, so it can simply be put into the HTML directly. This is useful in canvas because we want to export the image without it having a specific public URL, and data URLs allow that to be done.

The contents of the canvas element can be converted to a data URL with the .toDataURL method.

Next, let's download the data URL into the user's machine. In HTML, downloading a file is done by clicking a link and specifying the download attribute. For example, here's how someone would download an image as myimage.png when the user clicks a link: <a href="image.png" download="myimage.png">download!</a>.

Downloading a file through JavaScript is as simple as creating a link element with the specified href and download attributes, and artificially clicking on it.

Try running downloadCanvasContents() in the JavaScript console after the Sierpinski triangle has been generated! An image should be downloaded to your machine with the contents of the canvas element.

To create a download button, adding a simple HTML button with the onclick attribute set to the downloadCanvasContents function should suffice.

Feel free to take a look at the final code and the final result.

How to handle JWT & Http-Only Cookies Authentication with Next.js