I recently worked on an open source project called Jupiter, an online AI to beat the popular online game 2048.

Go try out the AI: 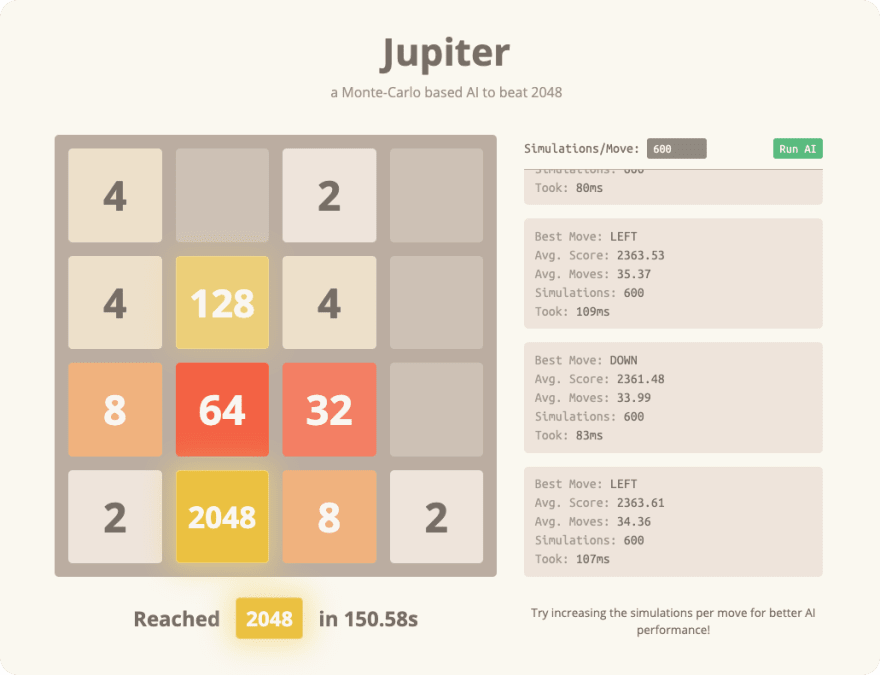 In writing this AI, I decided to use a machine learning method called the Monte Carlo Tree Search (MCTS) algorithm. Monte Carlo algorithms like the one used in Jupiter have been used in several notable AIs, including DeepMind's AlphaGo, which famously beat the Go world champion in May 2017.

In this article, I'll explain:

Note: I got the idea of using a Monte Carlo method to beat 2048 from this StackOverflow answer.

What is the Monte Carlo Method?

For example, let's say that you were flipping a coin, and trying to figure out the probability of the coin landing heads. With the Monte Carlo method, we could simulate 10,000 coin tosses, and calculate the percentage of coins that landed heads. 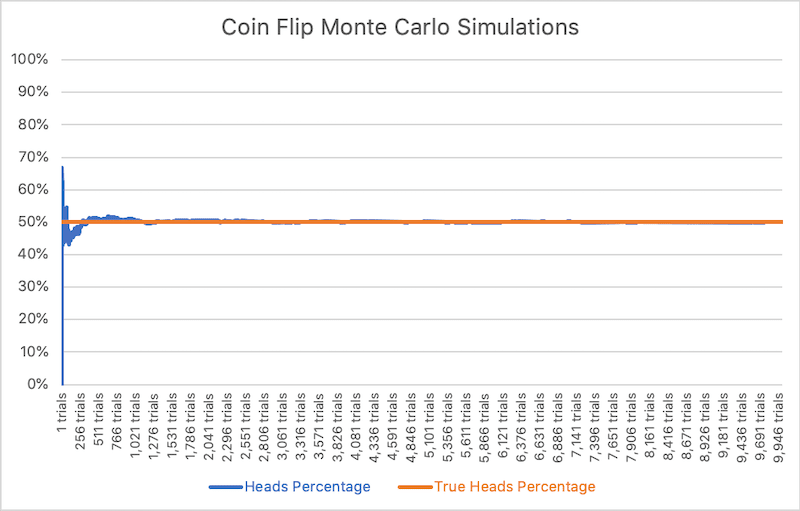 Monte Carlo simulations work because of the Law of Large Numbers, which says:

If you simulate the same experiment many times, the average of the results should converge to the expected value of the simulation.

In other words, Monte Carlo simulations are a way to estimate what will happen in a given experiment without having to implement any specific algorithms or heuristics.

When and Where the Monte Carlo Method Can Be Useful

The Monte Carlo method is used in a variety of fields, including game AI development, finance and economics, and evolutionary biology to name a few.

The Monte Carlo method can be useful in any experiment with a random factor, where end results cannot be predicted algorithmically. For example, in 2048, a new tile at a random location is added after every move, making it impossible to calculate the exact location of upcoming tiles and subsequently the end result of the game as well.

In these types of experiments, running a large number of Monte Carlo simulations can help get a sense of the average end results, the probability of various events occurring, and the relationship between the variables in the experiment.

For example, using the Monte Carlo method to in Jupiter allowed me to better understand how variables like starting move, number of moves in a game, and best tile in the board affected the end results of the game.

How I Used the Monte Carlo Method in Jupiter, an AI to Beat 2048

Let's start with a few definitions:

At any given game state, let's assume that four possible moves can be made: left, right, up, or down.

There are indeed cases where a certain move is not possible in a given game state. Removing impossible moves can be easily added to the algorithm later.

With the Monte Carlo method, we can run a set of game simulations for every move.

For each possible move, the program simulates a set of simulations which start by playing the move for that set first. After that, the rest of the game can be played completely randomly until it is over.

In this program, the optimal move is the one with simulations with the highest average final game score.

Note: I could have chosen to optimize for a different value such as the number of moves in the game.

To add this functionality of optimizing for highest score to our current code: add an array of total final scores for the simulations for each possible move, and choose the move with the highest value in that array to play like so:

In the end, this algorithm is simple to implement given a well-written 2048 game class. In JavaScript, there are a number of performance upgrades that can be made, starting by adding concurrency with Web Workers and pruning moves with very low final game scores.

I hope you enjoyed this post, and found it useful in helping you understand and implement the Monte Carlo method in your own projects.

Go check out Jupiter and its source code.