I appered for an online hackathon challenge on React, The task given for me was to build an Instagram clone web app.

I really liked working in react, how it helped me build faster with organised code.In short time I finished the task given,because with help of plug and playable components ( yes ,I shamefully reused most of my prev project components 😁😁 ).

I still hate my first experience as web dev when I have to care about the order of script tags and multiple libraries,dependencies confilcts.

This image sharing app lets you to share images , it has functionality as follows 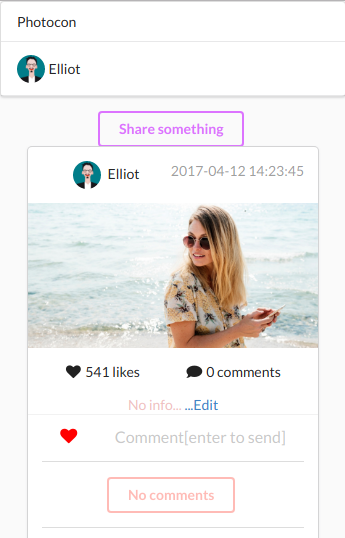 This app was built using React-Redux and UI development framework was Semantic ui.

The Project was built using React-Redux architecture, in case of storing the likes for the images was done using redux store, single state manager. Semantic Ui used for this responsive web app that fit for mobile view. Taken care of mobile first design Used axios to load the insta.json file to the app. At first I tired directly with the provided api but i faced CROS related issues.

An Intro to useContext in React.js

Once suspended, yashwanth2804 will not be able to comment or publish posts until their suspension is removed.

Once unsuspended, yashwanth2804 will be able to comment and publish posts again.

Once unpublished, all posts by yashwanth2804 will become hidden and only accessible to themselves.

If yashwanth2804 is not suspended, they can still re-publish their posts from their dashboard.

Once unpublished, this post will become invisible to the public and only accessible to kambala yashwanth.

Thanks for keeping DEV Community 👩‍💻👨‍💻 safe. Here is what you can do to flag yashwanth2804:

Unflagging yashwanth2804 will restore default visibility to their posts.