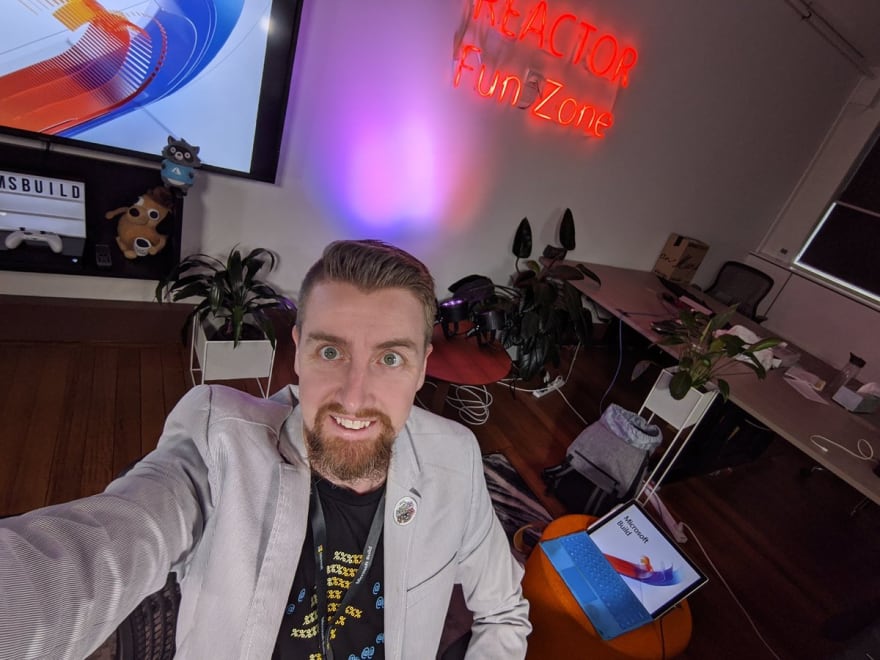 Getting set up for #MSBuild live in the Sydney studio 🤩

Just over a week ago, Microsoft Build was run as a fully online event. This was the first time we'd done a 100% virtual event, but given the global situation, it was the sensibly way to do it.

If you didn't tune in, the format was a 48 hour continuous live stream, consisting of around around 10 different “channels” that you could watch with all sessions delivered live. I was lucky to work with the wonderful Sonia Cuff and Rick Claus to host the APAC edition of the Build News Desk.

You can go catch all ~370 sessions from Build on YouTube or go back and relive your favourite memories.

But for this post, I want to talk a bit about how we ran the event here in Sydney.

In Sydney, we decided to create a “studio” that would be used by myself to do the News Desk duties. This was partly for us to test how we could setup something professional for live streaming, and partly because it was a bit of fun! 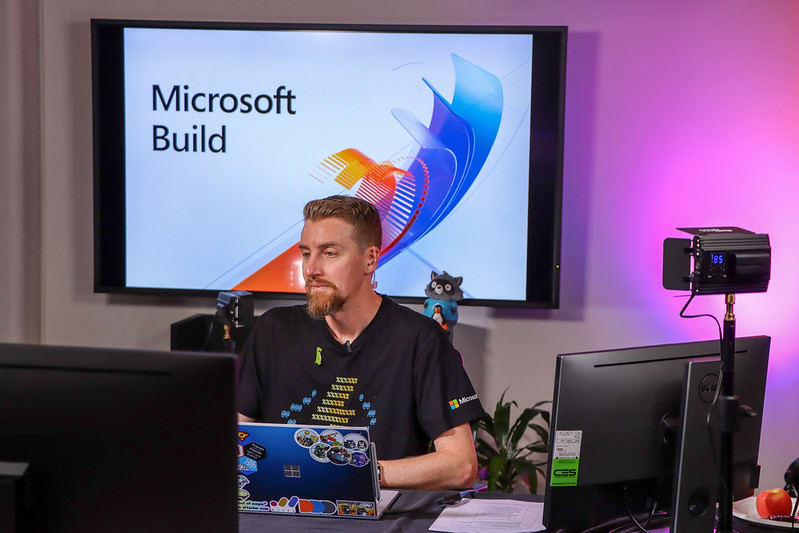 We setup a studio in the Sydney Microsoft Reactor and cobbled it together with the kit we had available.

For the camera, we were lucky enough to have access to a high quality streaming camera that we use in the Reactor for events. I'm not really sure what it is, other than it's big, heavy, expensive and has a massive tripod to mount it on.

We had a few redundancy options with the camera, we had a DSLR on hand that could be run on streaming and a high quality webcam. Thankfully, we didn't have to use them. We didn't want to have to be swapping out kit on the fly!

Trying to get our lighting balance right took a lot of work, I had 4 lights dedicated on me (I think I'm still seeing spots 🤣) and another 3 or 4 around the room to help with the ambient light. The ones dedicated to me were key lights, like people use for streaming/home office setup, nothing too fancy, while the others were more photography style light boxes, the sort of thing you'd pick up at a camera store, providing back lighting.

While there was overhead lighting in the room (fluro tubes and down lights), we opted not to use them as they are all on different temperatures and hues, making consistent lighting harder to achieve. You may also notice in the background some fun colours, we did that with some small spotlights to breakup the background and to make it pretty.

Audio was a bit more fun. We didn't want the headphones + mic-on-desk look, and given we were online for many hours, headphones can be uncomfortable after a while and anyway, they don't give that true studio look. So we decided to go with an IFB, which is those things that TV hosts have in their ears (you'll see the clear spiral behind their ears) for the audio out and a lapel mic for audio in. Again, we had redundancy in the form of headphones and a few on-desk mics, which again we didn't need to use. 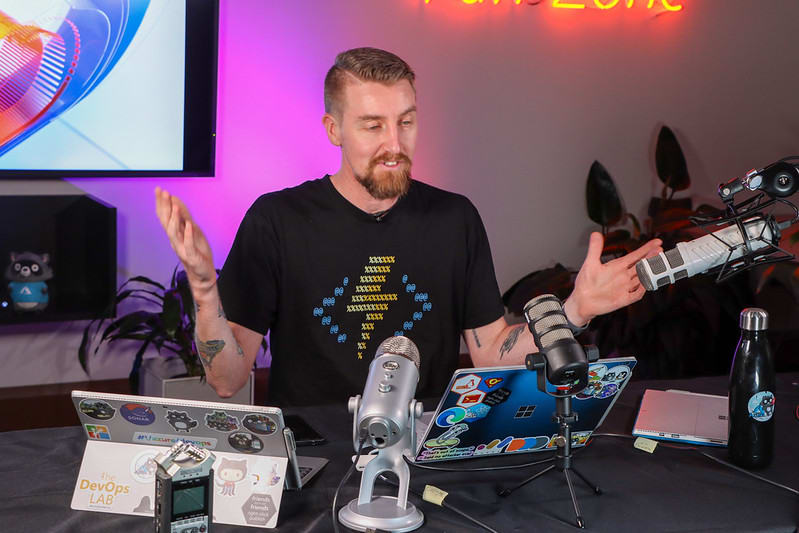 The ear piece and lapel were connected to a small recorder which gave us control around level/etc. before sending it via USB to the production team. This meant that we could give the cleanest audio we could and reduce the need for editing/balancing before broadcast.

A Hosts View of the World 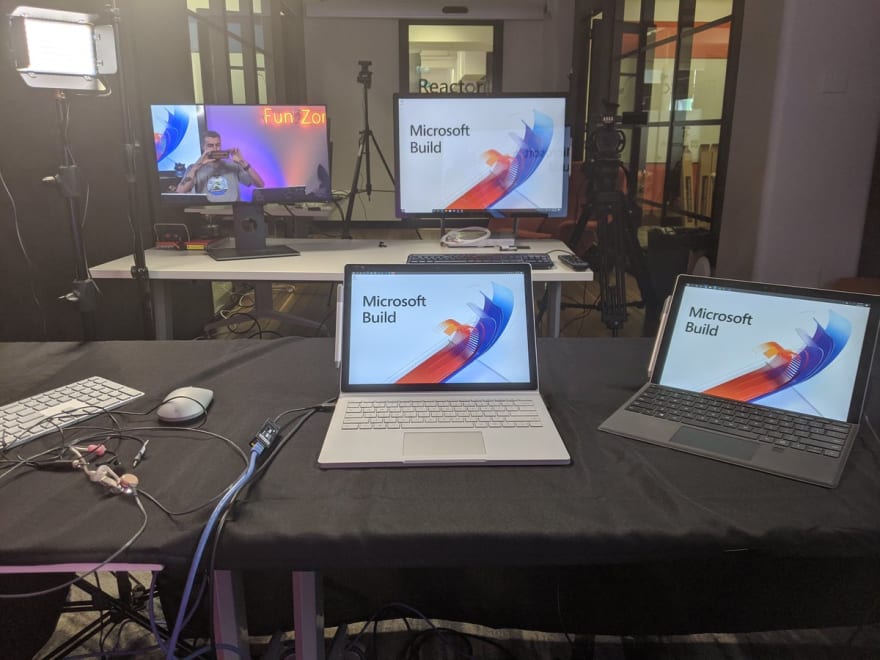 Putting the finishing touches on my setup for #MSBuild, who's registered and ready for the event 🤩

That's right, I had 5 screens that I had in my field of view (only 4 in the photo though), and they were:

There was also a 2nd Surface Pro 4 off to my left and on the floor powering the TV behind me, and it wasn't something that I used because I couldn't see it. So all in all I had more screens than I could possibly need, but hey, why not have them everywhere!

Also, there was a local production crew in Sydney (in another room) that had like 5 screens to monitor all the comms with our Microsoft Studio production team, based in Redmond.

I had a local production team who were there to help is we had technical issues, to keep an ~eye~ ear into the Redmond production team and to make sure I was kept plied with snacks, but most of the magic happened in Redmond.

We used Teams for the event and each of us dialled into separate calls. From there the Redmond production team took over, working some magic to connect us all together. Because we weren't in the same Teams call as each other it meant that the production team could talk to us individually, so if I wasn't properly in frame or we were running over time they could pop in my ear, and only my ear.

As a techy, I found this whole setup so cool! I don't know how it works behind the scenes, but the fact they we were all on separate called but then the same call, I had to hold back on geeking out too much! 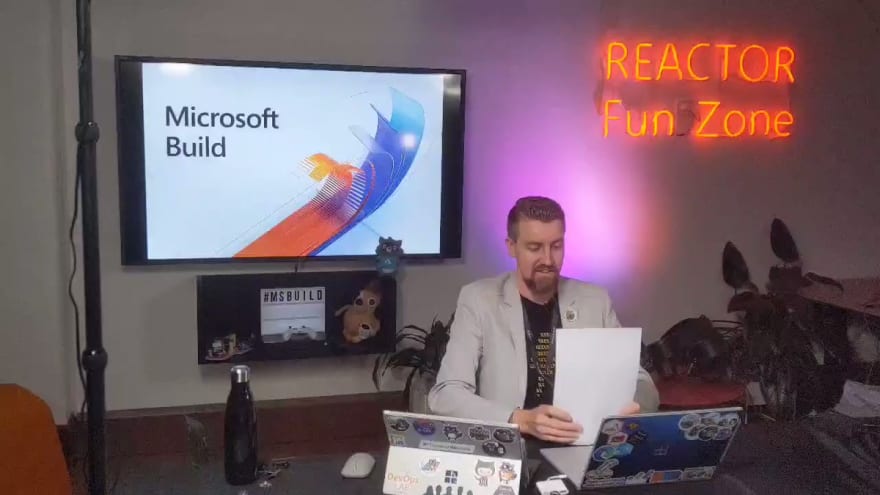 Time to read the script @SoniaCuff and I have for #MSBuild

While we tried to make everything seem as natural as possible, we did have a script to follow and keep us on track as much as we could.

When we're in a session with guests, the host (myself, Sonia, Scott, Damian, Dave and Justin) worked with the guests to create a framework for the conversation. While I can't speak for the others, I tried to keep them a bit lose so that we could follow interesting threads as we chatted, rather than just step from one bullet point to the next and this worked really well. Since you're not physically in the same location as the person, it's really hard to read body language and when you've got multiple guests (some who English wasn't their first language) a rough outline made everyone feel more at ease on where we were going.

But with the other parts, when it was Rick, Sonia and myself, we tried to be a bit more structured. This meant that we could ensure we were keeping on message of the important things to do with Build, like talking about our not for profit partners, the programs we were running around Build or talk about upcoming sessions.

To make sure that we were all in sync with each other, and that we could make the scripted parts feel natural, we had a number of table reads in which we went through the script as though it was live, then tweaked the wording and flow with our script writers. We also had a full day of rehearsals in which we setup as though we were doing the event (lighting, audio, cameras, etc.) and presented to no one. This was a lot of fun and it help get everyone at ease around how the event would flow and give the confidence that we were going to nail it! Fun fact - the rehearsal was the Monday before Build, so we only just got it in. 🤣

After a last minute taping down of all the cables (there was A LOT of cables), some final tech checks with the production team, it was go time! Sonia and I had sneakily watched the keynotes before their rebroadcast so we got our notes and talking points sorted so that we could do some hot takes in the first segment (that was all unscripted!) and then it was into sessions with our guests. I got to speak to some amazing people around APAC about lot of different topics (you can see all the session I was involved with here), wrapping up the day by passing over to the UK hosts, and then I went home utterly exhausted. I've done big events in the past, lots of talking in a single day, but this was probably the most exhausted I'd been, I was so exhausted in fact that I didn't even eat any of the fancy cakes my wife had picked up from a chef friend that day (my loss, I ate them the next day and they were good).

Day 2 was a lot easier (despite the fact I did more content!) and I think a lot of that was the nerves from day 1, the “would this work” and “will the audience respond positively” concerns had all be answered with a resounding yes , it was now time to have fun.

I've done a lot of events in my time and this would rank as one of the most fun events I've been apart of. Sure, I missed having the hallway track, I missed seeing the faces of people in the audience, but given that we're going to be doing a lot more of these kinds of events, I really can't wait to be part of it.

In the end, nothing really went wrong. I might've created a feedback loop by dialling a 2nd device into the call and had production kill my audio, and I might've forgotten to come off mute once, but hey, without a few stuff ups you wouldn't believe it was a live event. My co-hosts were fantastic to work with, we managed to just freestyle a bunch of it without any problems. The Sydney crew was awesome at getting the studio setup (I know nothing when it comes to lighting or cameras so I just sat there looking pretty) and the Redmond production team was so slick to work with and if things were going wrong at their end, I had no idea.

A huge shout-out to the guests that joined us, we did this on a short timeline and and they all did fantastic jobs.

We had a PM team supporting us along the way, finding guests and helping with speaker management, thanks Suzanne Chen, Sarah Thiam and Jack Skinner (Jack also ran Sydney production and did two on-air crosses!) for all the behind the scenes stuff.

And of course to the viewers who dialed in, engaged with our chat and on Twitter. I can't wait for the next event!

The photos and videos in here are from Jack, you can check out the full album on his Flickr.

How To Embed Microsoft Power BI Charts Into Your React Application

Let's Look at Images While Talking About Other Images