A couple of weeks ago I came across a very interesting book titled Operating Systems Concepts or "the dinosaur book" by Abraham Silberschatz, Greg Gagne and Peter B. Galvin, which has a very good reputation, and it's one of the best operating system textbooks. The book discusses a number of different concepts related to Processes, Threads, CPU Scheduling, Deadlocks, Memory, Storage, File-Systems, Security and more.

One of my friends on Twitter recommended it to me a few days ago, so I said that it's a good time to start reading it!

I started reading, and then I decided that it would be better to write a form of summaries or personal notes, so to speak based on the book, I'll start summarizing from chapter 3 because the first two chapters are talking about an introduction to the operating systems and its structure. So without further ado, let's Get Started!

Early computers allowed only one program to be executed at a time. This program had complete control of the system and had access to all the system’s resources. In contrast, contemporary computer systems allow multiple programs to be loaded into memory and executed concurrently.

The process is a program in execution and the unit of work in a modern computing system. Although its main concern is the execution of user programs, it also needs to take care of various system tasks that are best done in user space, rather than within the kernel space.

When we read about processes, we may face some other terminologies like job or task, they can be all considered the same thing, it really depends on the context. A “job” often means a set of processes, while a “task” is often a part of a job – sometimes the only part.

🧱 Memory layout of a process

It's typically divided into multiple sections, these sections include: 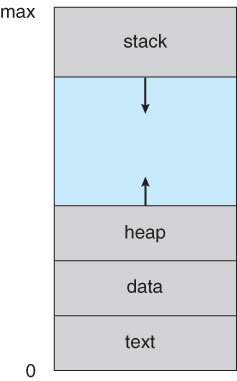 Memory layout of a C program:

Notice that the sizes of the text and data sections are fixed, as their sizes do not change during program run time. However, the stack and heap sections can shrink and grow dynamically during program execution, for example, in case of sending parameters or returning from a function.

A program becomes a process when an executable file is loaded into memory.

The state of a process is defined in part by the current activity of that process. A process may be in one of the following states:

For each process there is a Process Control Block(PCB) – also called a task control block, which stores the following process-specific information: 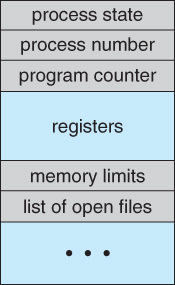 The process control block in the Linux operating system is represented by the C structure task_struct, which is found in the Linux repository through this path include/linux/sched.h The following structure contains all the necessary information for representing a process.

Within the Linux kernel, all active processes are represented
using a doubly linked list of task_struct. The kernel maintains a pointer current to the process currently executing on the system, as shown below:

If current is a pointer to the process currently executing, its state is changed with the following: 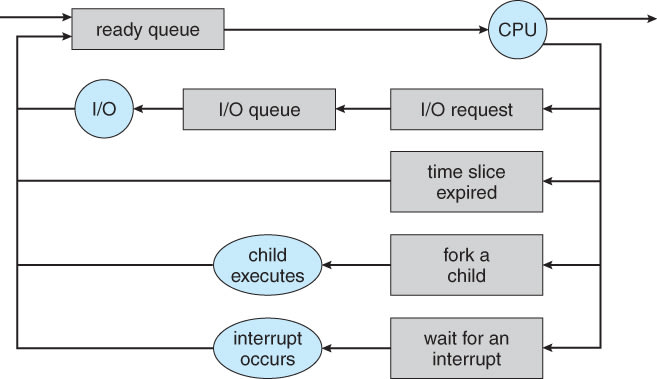 The above figure is a Queueing-diagram representation of process scheduling.

Some operating systems have an intermediate form of scheduling, known as swapping, whose key idea is to remove a process from the memory or loading the process again from disk back to memory.

When an interrupt occurs, the system needs to save the current context of the process currently running on the CPU so that it can restore that context when its processing is done, essentially suspending the process and then resuming it, this process is known as a context switch

In this article, we summarized chapter 3 – part 1, and talked about Process Concept, The memory layout of a process, Process State, PCB, Process Scheduling, Context Switch, and Multitasking in mobile systems. See you soon in the next article, and I will be talking about part 2 of chapter 3.

What is Imperative vs. Declarative programming?

Once suspended, abanoub7asaad will not be able to comment or publish posts until their suspension is removed.

Once unsuspended, abanoub7asaad will be able to comment and publish posts again.

Once unpublished, all posts by abanoub7asaad will become hidden and only accessible to themselves.

If abanoub7asaad is not suspended, they can still re-publish their posts from their dashboard.

Once unpublished, this post will become invisible to the public and only accessible to Abanoub Asaad.

Thanks for keeping DEV Community 👩‍💻👨‍💻 safe. Here is what you can do to flag abanoub7asaad:

Unflagging abanoub7asaad will restore default visibility to their posts.