This is the second in a series of articles describing a simplified example of near real-time Ad Campaign reporting on a fixed set of campaign dimensions usually displayed for analysis in a user interface. The solution presented in this series relies on Kafka, Aerospike’s edge-to-core data pipeline technology, and Apollo GraphQL

In part 1 of this series, we

Part 1 is the base used to implement Part 2

The simplified use case for Part 2 consists of reading Ad events from a Kafka topic, aggregating/reducing the events into KPI values. In this case the KPIs are simple counters, but in the real-world these would be more complex metrics like averages, gauges, histograms, etc.

The values are stored in a data cube implemented as a Document or Complex Data Type (CDT) in Aerospike. Aerospike provides fine-grained operations to read or write one or more parts of a CDT in a single, atomic, database transaction.

The Core Aerospike cluster is configured to prioritise consistency over availability to ensure that numbers are accurate and consistent for use with payments and billing. Or in others words: Money

In addition to aggregating data, the new value of the KPI is sent via another Kafka topic (and possible separate Kafka cluster) to be consumed by the Campaign Service as a GraphQL subscription and providing a live update in the UI. Part 3 covers the Campaign Service, Campaign UI and GraphQL in detail. 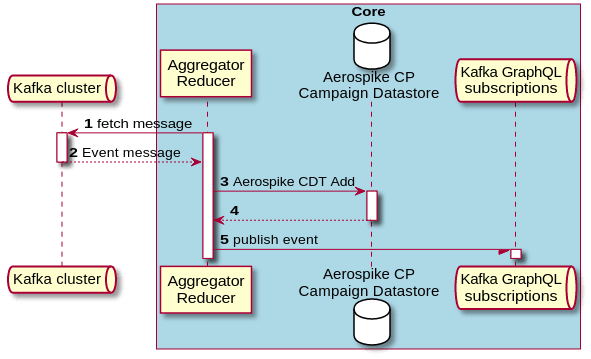 The companion code is in GitHub. The complete solution is in the master branch. The code for this article is in the part-2 branch.

Javascript and Node.js are used in each service although the same solution is possible in any language.

The solution consists of:

Docker and Docker Compose simplify the setup to allow you to focus on the Aerospike specific code and configuration.

What you need for the setup

All the perquisites are described in Part 1.

To set up the solution, follow these steps. Because executable images are built by downloading resources, be aware that the time to download and build the software depends on your internet bandwidth and your computer.

Once up and running, after the services have stabilised, you will see the output in the console similar to this:

How do the components interact? 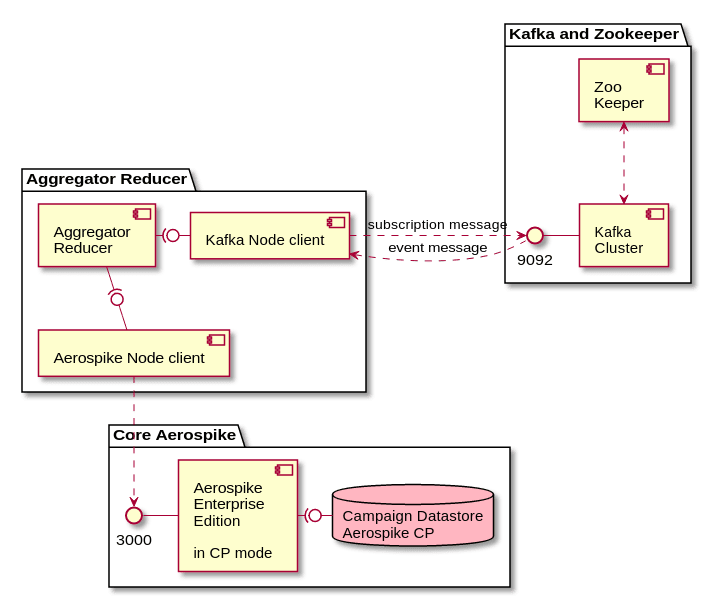 All of the services and containers in Part 1 with the addition of:

Aggregator/Reducer aggregator-reducer - A node.js service to consume Ad event messages from the Kafka topic edge-to-core and aggregates the single event with the existing data cube. The data cube is a document stored in an Aerospike CDT. A CDT document can be a list, map, geospatial, or nested list-map in any combination. One or more portions of a CDT can be mutated and read in a single atomic operation. See CDT Sub-Context Evaluation

Here we use a simple map where multiple discrete counters are incremented. In a real-world scenario, the datacube would be a complex document denormalized for read optimization.

Like the Event Collector and the Publisher Simulator, the Aggregator/Reducer uses the Aerospike Node.js client. On the first build, all the service containers that use Aerospike will download and compile the supporting C library. The Dockerfile for each container uses multi-stage builds to minimise the number of times the C library is compiled.

How is the solution deployed?

Each container is deployed using docker-compose on your local machine.

Note: The aggregator-reducer container is deployed along with all the containers from Part 1.

How does the solution work?

The aggregator-reducer is a headless service that reads a message from the Kafka topic edge-to-core. The message is the whole Aerospike record written to edge-aerospikedb and exported by edge-exporter.

The event data is extracted from the message and written to core-aerospikedb using multiple CDT operations in one atomic database operation. 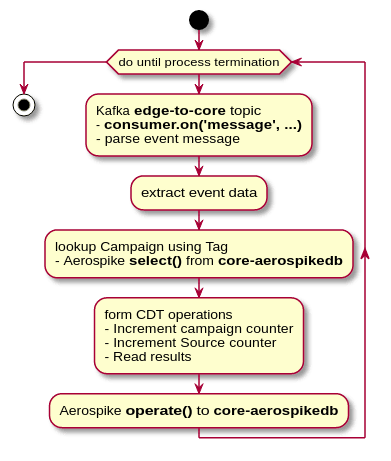 To read from a Kafka topic you need a Consumer and this is configured to read from one or more topics and partitions. In this example, we are reading a message from one topic edge-to-core and this topic has only 1 partition.

Note that the addTopic() is called after the Consumer creation. This function attempts to add a topic to the consumer, if unsuccessful it waits 5 seconds and tries again. Why do this? The Consumer will throw an error if the topic is empty and this code overcomes that problem.

The payload of the message is a complete Aerospike record serialised as JSON.

These items are extracted:

These values are used in the aggregation step.

The Tag Id is used to locate the matching Campaign. During campaign creation, a mapping between Tags and Campaign is created, this example uses an Aerospike record where the key is the Tag id and the value is the Campaign Id, and in this case, Aerospike is used a Dictionary/Map/Associative Array.

The Ad event is specific to a Tag and therefore a Campaign. In our model, a Tag is directly related to a Campaign and KPIs are collected at the Campaign level. In the real-world KPIs are more sophisticated and campaigns have many execution plans (line items).

Each event for a KPI increments the value by 1. Our example stores the KPIs in a document structure (CDT) in a bin in the Campaign record. Aerospike provides operations to atomically access and/or mutate sub-contexts of this structure to ensure the operation latency is ~1ms.

In a real-world scenario, events would be aggregated with sophisticated algorithms and patterns such as time-series, time windows, histograms, etc.

Our code simple increments the value KPI value by 1 using the KPI name as the 'path' to the value:

The new KPI value is incremented and the new value is returned. The magic of Aerospike ensures that the operation is Atomic and Consistent across the cluster with a latency of about 1 ms.

We could stop here and allow the Campaign UI and Service (Part 3) to poll the Campaign store core-aerospikedb to obtain the latest campaign KPIs - this is a typical pattern.

A more advanced approach is to stimulate the UI whenever a value has changed or at a specified frequency. While introducing new technology and challenges, this approach offers a very responsive UI presenting up to the second KPI values to the user.

The SubScriptionEventPublisher uses Kafka as Pub-Sub to publish the new KPI value for a specific campaign on the topic subscription-events. In Part 3 the campaign-service receives this event and publishes it as a GraphQL Subscription

Part 1 of this series describes:

This article (Part 2) describes the aggregation and reduction of Ad events into Campaign KPIs using Kafka as the messaging system and Aerospike as the consistent data store.

This article, the code samples, and the example solution are entirely my own work and not endorsed by Aerospike or Confluent. The code is PoC quality only and it is not production strength, and is available to anyone under the MIT License.

Why Should Engineering Teams Care About Git Analytics

Why is it important for agile teams to reduce technical debt?

Are you developing on Aerospike and want to contribute to our dev community?
Our community repo is on GitHub and we’d love to hear how you’re using Aerospike by contributing articles to our community.

Once suspended, aerospike will not be able to comment or publish posts until their suspension is removed.

Once unsuspended, aerospike will be able to comment and publish posts again.

Once unpublished, all posts by aerospike will become hidden and only accessible to themselves.

If aerospike is not suspended, they can still re-publish their posts from their dashboard.

Once unpublished, this post will become invisible to the public and only accessible to Peter Milne.

Thanks for keeping DEV Community 👩‍💻👨‍💻 safe. Here is what you can do to flag aerospike:

Unflagging aerospike will restore default visibility to their posts.