Problem is based off of Mode's SQL Tutorial. Below is the problem:

You show up to work Tuesday morning, September 2, 2014. The head of the Product team walks over to your desk and asks you what you think about the latest activity on the user engagement dashboards. You fire them up, and something immediately jumps out:

The above chart shows the number of engaged users each week. Yammer defines engagement as having made some type of server call by interacting with the product (shown in the data as events of type "engagement"). Any point in this chart can be interpreted as "the number of users who logged at least one engagement event during the week starting on that date."

You are responsible for determining what caused the dip at the end of the chart shown above and, if appropriate, recommending solutions for the problem.

Before I begin exploring the data let's start by formulating some hypotheses as to why user engagement could drop, below are a few of mine:

Now that we have some ideas independent of the data let's explore the data itself. This will help give us an idea of what questions we can answer as well as indulge our natural curiosity.

The first table we have access to is the users table which has the following information:

I'm curious how many total users are in the database so I will query that.

While we are here may as well check what portion of these accounts are activated or pending activation.

Quite a large amount of users are still pending activation of their account. This seems odd so probably worth exploring this more in the future. Questions that come to mind are the following:

Here is a visualization of the query:

At this point I would like to know more about what exact conditions are being met by an account being in a pending status. For this exercise I can't do that so I'll just give my best guess. It's likely that out of all the accounts made in a day some portion of them are bots and fail to pass activation. Another possibility are users who created an account but didn't proceed properly for account activation. Over time a database would have a rather large accumulation of these types of pending accounts.

Personally I would prefer if there was an additional state being followed so that a pending account state didn't cover so many possibilities. For example add an additional state 'terminated' for accounts that have been in pending limbo for too long as well as a termination date. This way pending would imply a fresh account awaiting activation as opposed to a graveyard mixed with fresh accounts.

Next I would like to explore the language field to get an idea of the background of people who utilize the app. Specifically looking at active accounts as they would accurately reflect the demographics of people utilizing the app 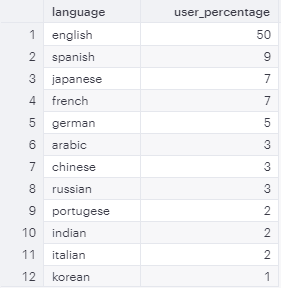 Lastly I would like to get an idea of both the number of companies these users are from as well as how many users per company. 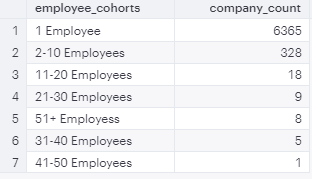 Yammer is designed to be a social networking app for communicating with coworkers so it's odd to see that so many of the active users are from companies with only one active user. If I had no one to work with on the app what is the point of even being on the app? In the future it will probably be useful to do queries where we specifically target companies with only one user versus multiple users.

Starting with a broad look of the table

Overall this table has some interesting new data to play with. I'm specifically interested in the device, event_name, and event_type columns. 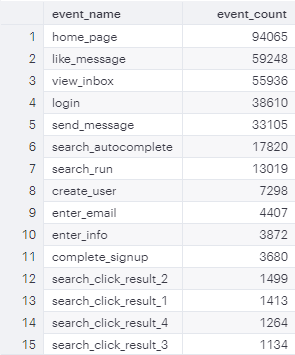 In retrospect I'd prefer to look at this as a percentage 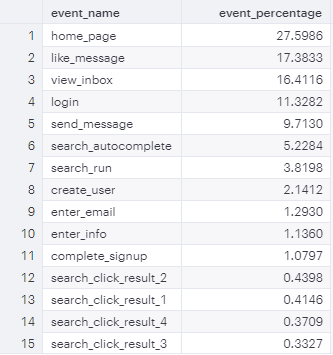 From this query we can see that a majority of the user engagements are from interactions with home_page, like_message, view_inbox, login, and send_message

Earlier we discovered that a large portion of the user base are actually the only user in a company. I'm a little curious as to how their engagements differ so we'll do a query to explore that now. 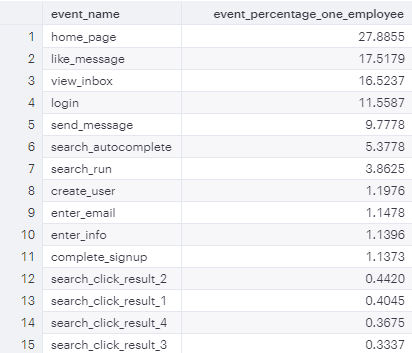 This is a big query but the overall logic is similar to the engagements query from earlier. First I extract the companies with only 1 user in a query. Downside is by doing this I just lost the user_id information which is necessary to join with the engagements table. To regain user_id information I join the previous query with the main table on company_id. I now have a table of user_id that only belong to one company. Using this table I can now join it with the engagements table and display information pertaining only to users who are the only person in their company using the application. I still want to display this information as a percentage so I need to replicate everything I just did but instead count all the users together.

I intentionally designed the query so that I could also check companies with more than one user as well by changing a few conditions. The table for this query's output is below. 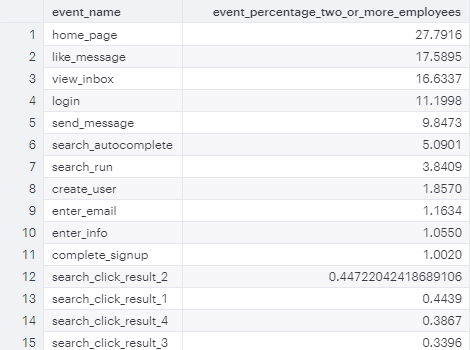 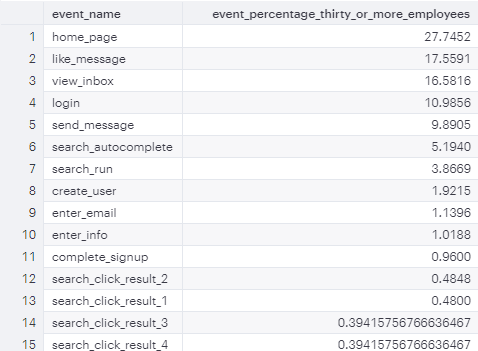 Again the results aren't too different. Looks like this may be a dead end for now. On to the next column 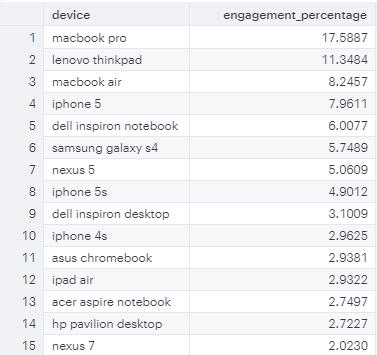 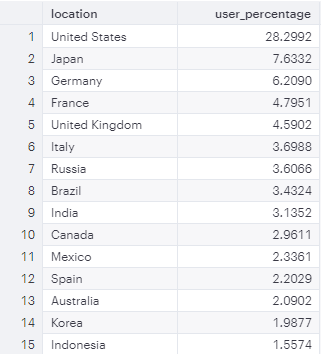 Next query is to see what are the unique values for event_type.

Overall this table will be useful in our analysis since we are exploring a drop in user engagement. There is still one column that I haven't explored quite yet, the user_type column. Main reason for this is that the data is numerical and I don't have a way to associate the numbers to a descriptive state. Without a descriptive state I can't really interpret the significance of a user having user_type = 3 or 2.

By now you know the drill. Let's see the entire table.

That should be it for exploring the data, let's return back to my initial hypotheses.

After exploring the database I can now update my possible hypotheses list:

The following are some new hypotheses I feel are worth exploring

Below are some reasons why I chose to not include some of my initial hypotheses.

Moving forward it's time to prioritize the order in which I will explore my hypotheses.

Now that I have made a list of hypotheses I feel are possible explanations for a drop in user engagement it's time to begin analysis. This will be the subject of part two of my dive into the Yammer business problem.

Drop all tables and reset an Azure SQL Database

AhmedAmrAwadallahK8
Exploring the world one bit at a time
Why "Do Your Own Research" is terrible advice
#career #money #discuss #healthydebate
If you could start a company, what would it be?
#discuss #career #entrepreneur
Designing SQL databases for rock solid data quality
#sql #postgres #database #mysql

Once suspended, ahmedamrawadallahk8 will not be able to comment or publish posts until their suspension is removed.

Once unsuspended, ahmedamrawadallahk8 will be able to comment and publish posts again.

Once unpublished, all posts by ahmedamrawadallahk8 will become hidden and only accessible to themselves.

If ahmedamrawadallahk8 is not suspended, they can still re-publish their posts from their dashboard.

Once unpublished, this post will become invisible to the public and only accessible to AhmedAmrAwadallahK8.

Thanks for keeping DEV Community 👩‍💻👨‍💻 safe. Here is what you can do to flag ahmedamrawadallahk8:

Unflagging ahmedamrawadallahk8 will restore default visibility to their posts.