A React application is basically a tree of components that communicate data with each other. Passing data between components is often painless. However, as the app tree grows, it becomes harder to pass that data while maintaining a sound & readable codebase.

Say we have the following tree structure: 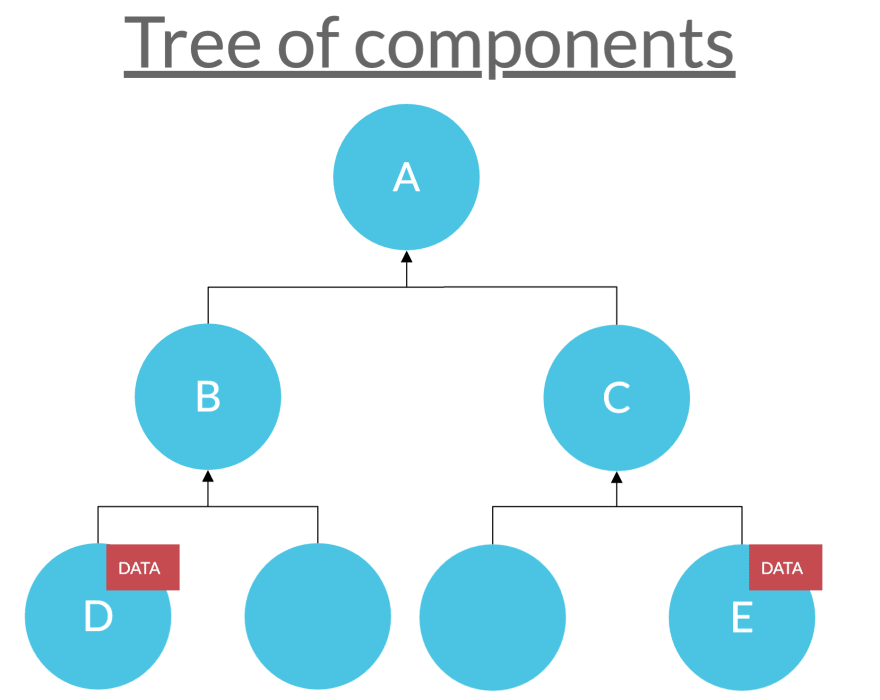 Here we have a simple tree with 3 levels. In this tree, node D and node E both manipulate some similar data: Say the user inputs some text in node D, which we wish to display in node E.

How do we pass that data from node D to node E?

The article presents 3 possible approaches to tackle this issue:

The aim of the article is to compare these approaches and show that, when it comes to solving a common problem such as the one we just worded, it is possible to just stick with React's context API.

A way of doing it would be to naively pass the data from child to parent then from parent to child through props as such: D->B->A then A->C->E.

We start with node D:

Finally, when reaching the root node A, the onUserInput triggered in the node B prop will change the state in node A to the user input.

That inputValue will then be through props from Node C to its child Node E:

See it already added some complexity to our code even if it's just a small example. Can you image how it would become when the app grows? 🤔

This approach relies on the number of depth of the tree, so for a larger depth we would need to go through a larger layer of components. This can be too long to implement, too repetitive and increases code complexity.

Another way would be to use a state management library like Redux.

Redux is a predictable state container for JavaScript apps.
The state of our whole application is stored in an object tree within a single store, which your app components depend on. Every component is connected directly to the global store, and the global store life cycle is independent of the components' life cycle. 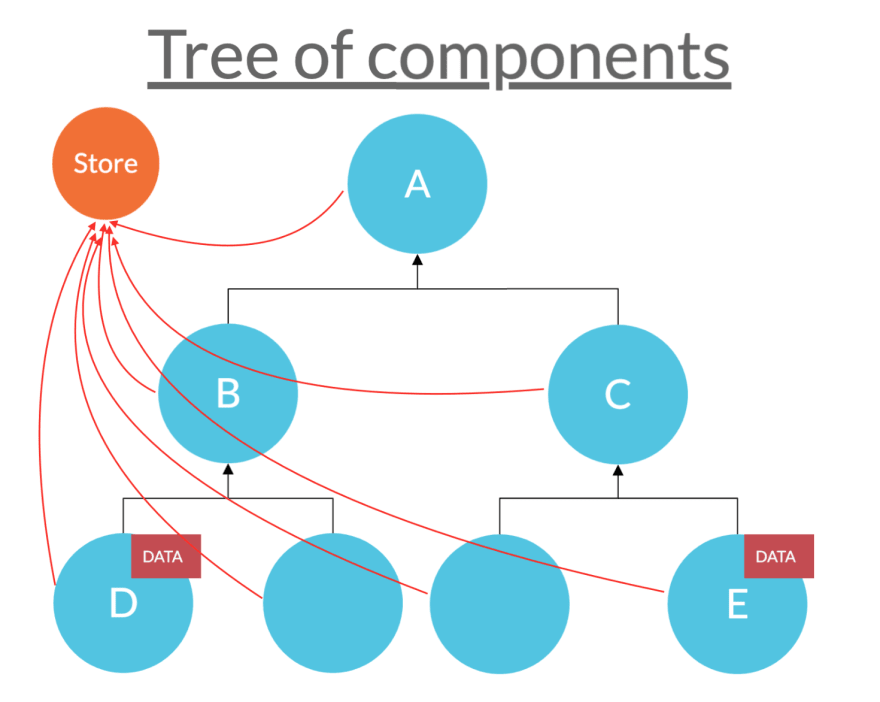 Before the user has typed anything, we know that our state's data or inputValue will be an empty string. So we define a default initial state to our reducer with an empty string inputValue.

The logic here is once the user types something in node D, we "trigger" or rather dispatch an action and our reducer updates the state to whatever has been typed. By "update" here I do not mean "mutate" or change the current state, I do mean return a new state.

And when we call that dispatch statement from whatever component, we pass in the type of the action, and the user input value.

Now that we have set up our store and reducer, we can get our hands dirty with our nodes D and E !

Let's first take a look at node D. We are interested in what the user inputs in the textarea element. This means two things:

1- We need to implement the onChange event listener and make it store whatever the user types in the store.
2- We need the value attribute of the textarea to be the value stored in our store.

But before doing any of that, we need to set up a few things:

We first need to connect our node D component to our store. To do so, we use the connect() function from react-redux. It provides its connected component with the pieces of the data it needs from the store, and the functions it can use to dispatch actions to the store.

This is why we use the two mapStateToProps and mapDispatchToProps which deal with the store's state and dispatch respectively. We want our node D component to be subscribed to our store updates, as in, our app's state updates. This means that any time the app's state is updated, mapStateToProps will be called. The results of mapStateToProps is an object which will be merged into our node D's component props. Our mapDispatchToProps function lets us create functions that dispatch when called, and pass those functions as props to our component. We will make use of this by returning new function that calls dispatch() which passes in an action.

In our case, for the mapStateToProps function, we are only interested in the inputValue, so we return an object { inputValue: state.inputValue }. For the mapDispatchToProps, we return a function onUserInput that takes the input value as parameter and dispatches an action of type USER_INPUT with that value. The new state object returned by mapStateToProps and the onUserInput function are merged into our component's props. So we define our component as such:

We are done with our node D! Let's now move on to node E, where we want to display the user input.

We wish to display the user input data on this node. We already know that this data is basically what is in the current state of our app, as in, our store. So ultimately, we wish to access that store and display its data. To do so, we first need to subscribe our node E component to the store's updates using the connect() function with the same mapStateToProps function we used before. After that, we simply need to access the data in the store from the props of the component using this.props.val as such:

And we're finally done with Redux! 🎉 You can take a look at what we just did here.

In the case of a more complex example, say with a tree with more components that share/manipulate the store, we would need those two mapStateToProps and mapDispatchToProps functions at each component. In this case, it might be wiser to separate our action types and reducers from our components by creating a separate folder for each.
…Who's got the time right?

Now let's redo the same example using the context API.
The React Context API has been around for a while but only now in React's version 16.3.0 did it become safe to use in production. The logic here is close to Redux's logic: we have a context object which contains some global data that we wish to access from other components.
First we create a context object containing the initial state of our app as default state. We then create a Provider and a Consumer component as such:

We want our Provider component to wrap our entire App, just like in the Redux version above. However, this Provider is a little different than the previous one we've seen. In our App component, we initialise a default state with some data, which we can share via value prop our Provider component.
In our example, we're sharing this.state.inputValue along with a function that manipulates the state, as in, our onUserInput function.

Now we can go ahead and access the data of our Provider component using our Consumer component :)
For node D in which the user inputs data:

For node E in which we display the user input:

And we're done with our context version of the example! 🎉 It wasn't that hard was it ? Check it out here
What if we have more components that we wish to be able to access the context? We can just wrap them with the Provider component and use the Consumer component to access/manipulate the context! Easy :)

Ok, but which one should I use

We can see that our Redux version of the example took a bit more time to do than our Context version. We can already see that Redux:

If you are working on a more complex App and wish to view a history of all the dispatched action by your app, "click" on any one of them and jump to that point in time, then definitely consider using Redux's pretty dope devTools extension!

However if you're only interested in making some data global to access it from a bunch of components, you can see from our example that Redux and React's context API both do roughly the same thing. So in a way, you don't have to use Redux!

Scroll Based Animation in HTML, CSS And JavaScript

Anssam Ghezala
Beginner Javascript enthusiast exploring the web one framework at a time. Currently student at McGill University.
How to build your reusable component
#react #javascript

Once suspended, anssamghezala will not be able to comment or publish posts until their suspension is removed.

Once unsuspended, anssamghezala will be able to comment and publish posts again.

Once unpublished, all posts by anssamghezala will become hidden and only accessible to themselves.

If anssamghezala is not suspended, they can still re-publish their posts from their dashboard.

Once unpublished, this post will become invisible to the public and only accessible to Anssam Ghezala.

Thanks for keeping DEV Community 👩‍💻👨‍💻 safe. Here is what you can do to flag anssamghezala:

Unflagging anssamghezala will restore default visibility to their posts.