Every tech-savvy needs to constantly explore to keep themselves updated with the latest trends. To adjust to the ever-changing React ecosystem, it is important to learn about its latest libraries. These libraries are providing new possibilities but most importantly, making everything easier for the development environment. An individual can build his or her own team library by using bit.dev. The developers can Isolate the components codebase and share the collection in the library. 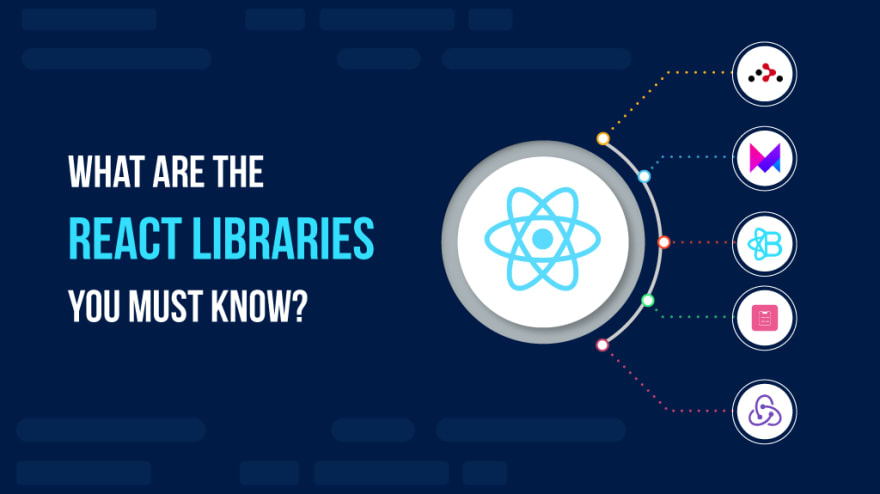 Facebook developers have made a command-line interface known as Create React App to build React.js project easily. It can build structures of files, catalogs, and have tools to build, test, and launch applications. This library must be included in every React project to save plenty of time. Otherwise, time is spent on manual configuration and manual setup. You just have to execute a Create React App and it does all for you.

The React Router consists of a set of navigational components that synchronizes the UI components with the browser's address. Additionally, stable transitions for screens, server-side rendering, and nesting support.

There are Boilersplates having reusable code blocks that enable the configuration of a number of libraries simultaneously. It enables to make identical copies of code blocks so, that it can be reused later on.

React Bootstrap is built with compatibility in mind. It enables you to have more control than other libraries to integrate and reuse UI components. It is prebuilt with the help of Bootstrap components and delivers a smooth interface-handling experience.

Bootstrap stylesheet enables to use of compatible Bootstrap themes. The developer can code efficiently and quickly by implementing fast coding through a reusable coding method.

React Motion is a prominent animation library and has a spring configuration as well to determine the animation. So, it eradicates all your worries regarding controlling complexities and duration. This animation library simplifies the development process with React components by using stiffness, damping, and precision methods.

The React-Spring API fills the gap between the declarative and imperative approaches. You can also avail of secure and shared - transitions.

Redux is a free-standing library with a predictable state container. Redux is primarily implemented with React UI library components and it can be also used with Vue, Ember, Vanilla JS, and Angular, etc. React and are independent of each other. Redux can be used with both backend and frontend libraries. With a reduced number of props or callbacks for connecting the state to components. Redux is the developer's best friend that allows writing code consistently and it can execute well in various platforms and can be perform testing easily. It needs UI binding to link with the UI frameworks and provides a vast number of addons.

🥁 I built a complete decentralized MultiSig Wallet with Solidity and ReactJS.

APPWRK IT Solutions
APPWRK IT Solutions is here to help your business with Custom IT Solutions & Trending Technologies so that your brand story makes a great impression and connects well with your target audience.
Reason Why You Need To Move From Angular To React?
#angular #react #javascript #programming

Once suspended, appwrk will not be able to comment or publish posts until their suspension is removed.

Once unsuspended, appwrk will be able to comment and publish posts again.

Once unpublished, all posts by appwrk will become hidden and only accessible to themselves.

If appwrk is not suspended, they can still re-publish their posts from their dashboard.