When dealing with SQL databases, users will have to interact with different data types and schemas depending on the project's requirements. Since databases are used in many different applications and support multiple platforms, devices, and users, there may be differences in how data is entered, even in a simple field like a phone number.

For example, one set of users will enter the phone number with the country code, while the others may simply ignore the country code. Therefore, it is essential for database users to know how to clean data in a SQL database. In this post, we will see how to utilize SQL string operations on phone number fields to properly clean, format, and extract data.

Why do we care about data cleaning?

Data comes in all forms and sizes. Most of the time, it will be raw data, without proper formatting. Data cleaning allows users to filter, sort, and format this raw data to extract meaningful information from it. Data cleaning also makes data analysis a much more efficient process as an additional benefit.

What are SQL string operations?

The full list of available string functions and operators is available in the official documentation.

How to use string operations with phone numbers

Now we have a basic understanding of string operations and related functions in SQL! So, let's look at how exactly we can utilize some of these functions on phone numbers to extract and format data. For all the examples provided here, we will be using the Arctype SQL client with a MySQL database in a Windows environment with the following dataset. 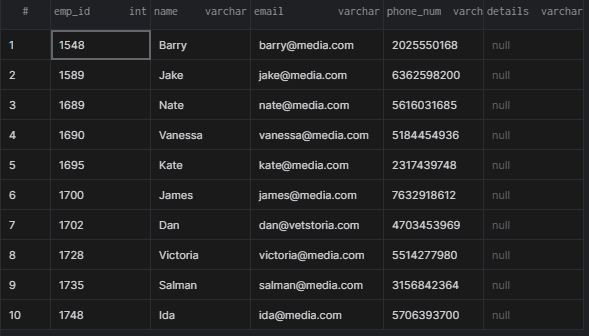 We can utilize the SUBSTR command to format phone numbers. It will extract parts of the number and use the CONCAT to join the specific parts together. In the following example, we have broken down the phone number into three distinct sections and combined them together with the formatting as a new field called num_formatted:

The result of the operation is show below: 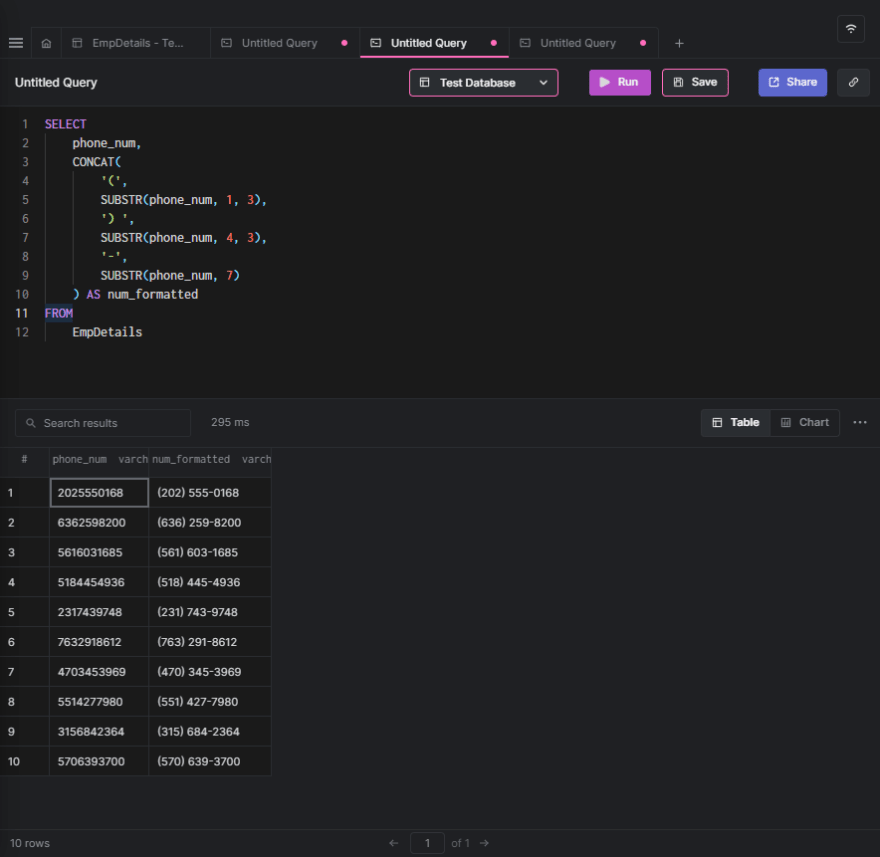 The result of the above operation is shown below: 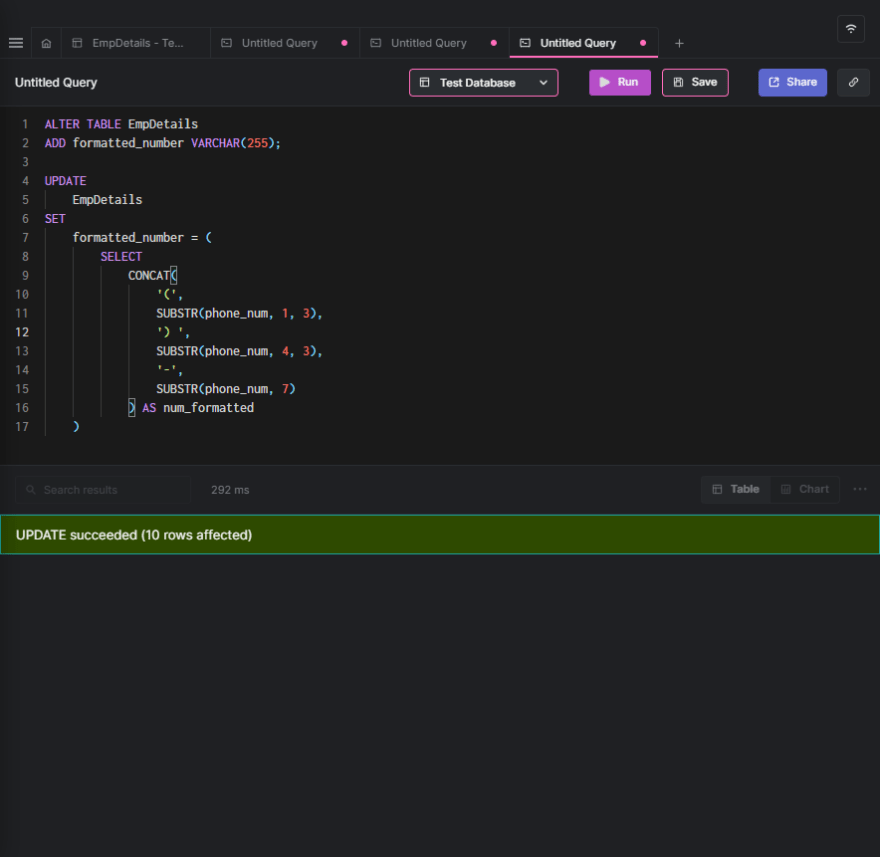 We can modify our SQL command to include the REPLACE function if there are additional characters in the phone number field, such as dashes and brackets. This function can be used to remove unnecessary characters and whitespaces in a string. Now let's further format the formmated_number field to include the country code.

In the above statement, the REPLACE function is used to remove the brackets, dashes, and whitespaces from the formatted_number field before undergoing the formatting process. 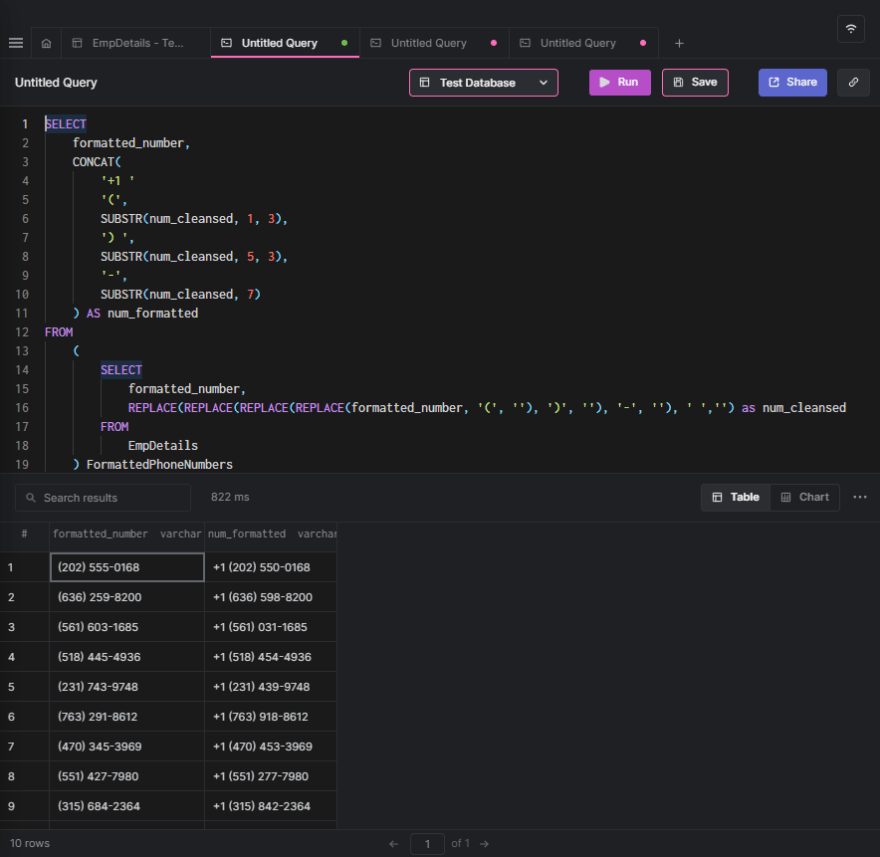 Extracting parts of a phone number

Here, the REPLACE function is used to remove the bracket from the selected number block. The result of the query is shown below. 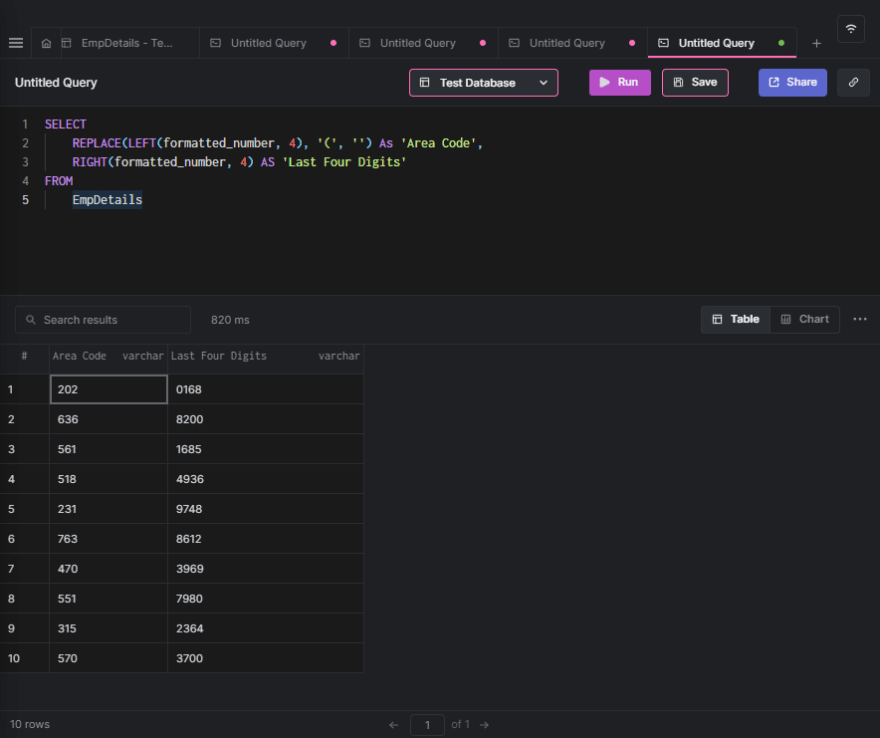 One of the most common tasks in the world of data cleaning is extracting phone numbers from a text block. The complexity and feasibility of this task will mostly depend on the composition of the text.

The easiest way to extract phone numbers is to utilize regular expressions to target the specific phone number formats. Extracting data has become far simpler with the introduction of functions like REGEXP_SUBSTR in MySQL 8.0. We will be populating the details column with some phone numbers in different formats, as shown below.

First, we need to figure out which rows consist of data matching our requirements. In this case, the following regular expressions will be used on the details field.

Results of the query can be seen below: 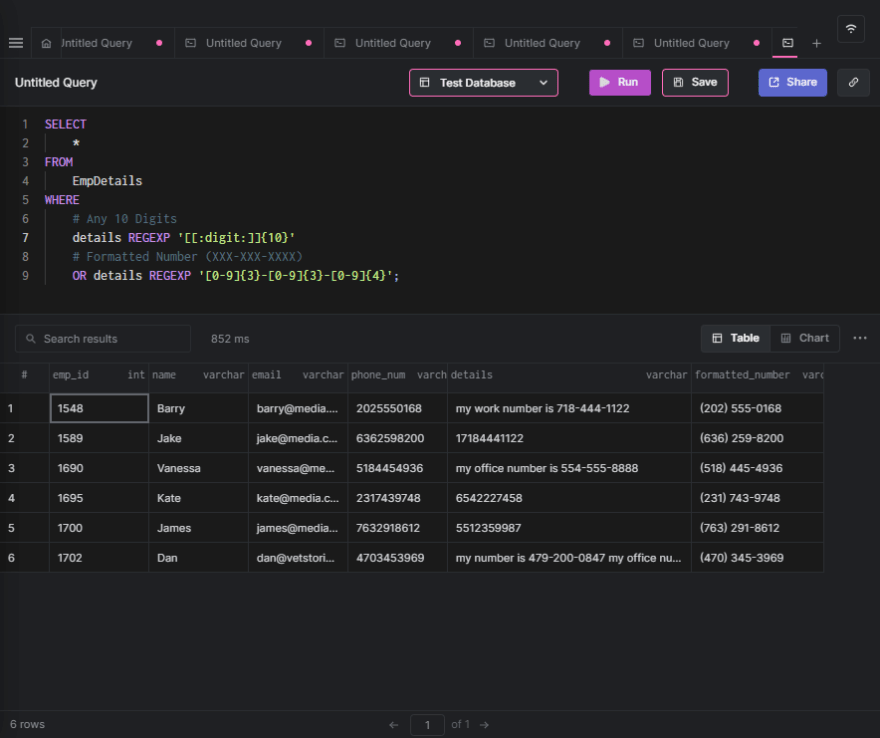 The result of this operation can be seen below: 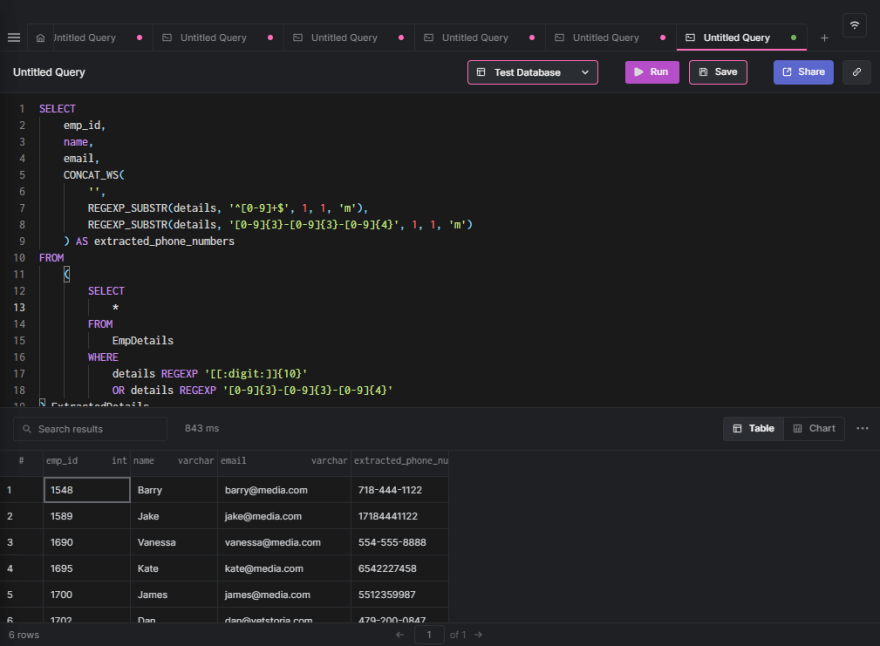 To query results from a single field with multiple numbers, we need to create a stored procedure that loops through the desired field to capture all matching regex patterns. For instance, let's see how to extract multiple phone numbers from the details field of emp_id 1702 (Dan).

The result of this operation is shown below. 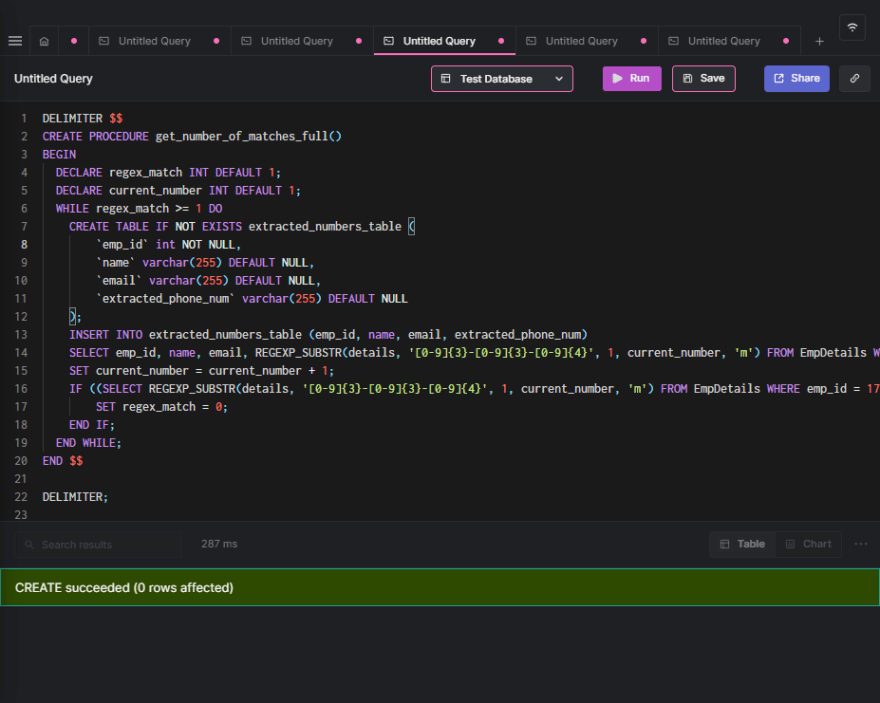 In the above code block, we have created a stored procedure called get_number_of_matches_full, which loops through the details field until all the regex matches are found on the specified row of the EmpDetails table. We are using the REGEXP_SUBSTR function with the position argument to extract different matches. It updates by one at each loop run and saves the results on a newly created extracted_numbers_table. Finally, the loop exits when a NULL result is found.

We can call this procedure and view the results by querying the extracted_numbers_table as shown below.

And, shown again in Arctype: 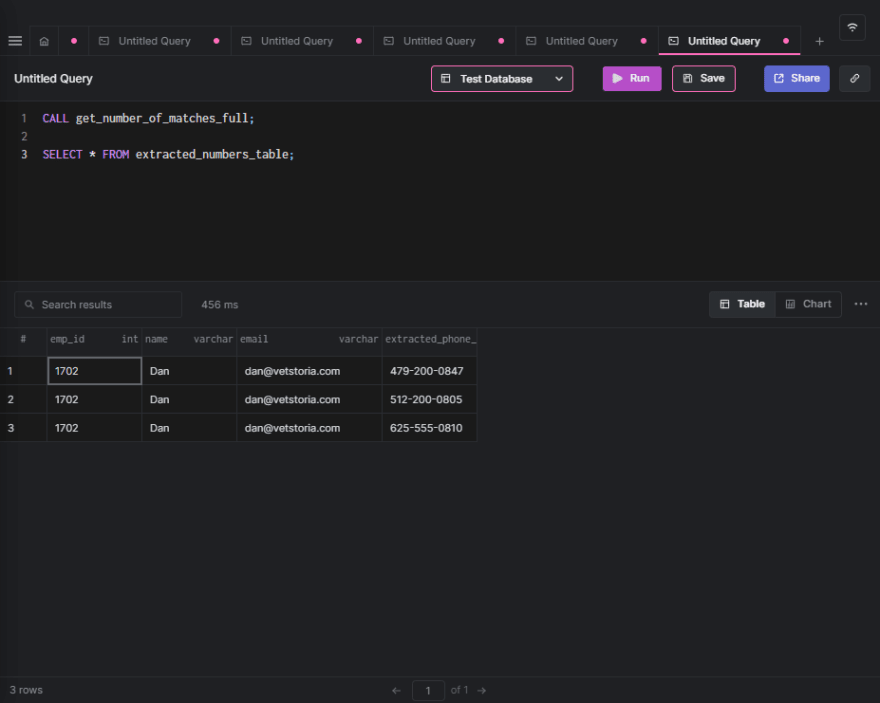 String operations in SQL are vital functions to clean and format data within a database. Moreover, string operations are the core component when dealing with valuable information such as phone numbers as they allow users to extract or manipulate phone numbers according to their requirements. However, it's important to remember that the exact functions available will change depending on the database type and version. Therefore, always remember to refer to the documentation to find out the available string operations and implement them to your heart's content.

PostgreSQL and YugabyteDB partitioning and indexes

Once suspended, arctype will not be able to comment or publish posts until their suspension is removed.

Once unsuspended, arctype will be able to comment and publish posts again.

Once unpublished, all posts by arctype will become hidden and only accessible to themselves.

If arctype is not suspended, they can still re-publish their posts from their dashboard.

Once unpublished, this post will become invisible to the public and only accessible to Arctype Team.

Thanks for keeping DEV Community 👩‍💻👨‍💻 safe. Here is what you can do to flag arctype:

Unflagging arctype will restore default visibility to their posts.