State is a crucial part of Vue applications and other frontend frameworks as it is responsible for how data is passed among components and views. The managing of state tends to become complex as an application grows larger. In this article, we will look at how to use a popular state management library of Vue called Vuex to manage state in Vue projects. But before we talk about State management we have to backtrack a little bit and talk about state.

Components in a Vue application contain data that may be dynamic and likely to change across the lifecycle of the component. A state is basically an object where the data a component needs is stored. For example, we can store a message a component needs in the state and display the message whenever the component is rendered. In Vue components, the state is stored in the data function so that each instance can maintain a copy of its state. The example below shows how to create a state for a single file component

What is State Management?

State management is a way of managing the state across multiple UI components efficiently. As we discussed earlier when an application becomes complex so does managing its state due to shared data across many components that need to interact with each other. This unique problem has given rise to state management libraries in the last few years.

Vuex is a state management library and state management pattern geared towards Vue applications. It makes managing state in Vue applications easier by providing a central storage for the state (and other computations) called a store. That way you can keep that business logic away from your components. Vuex is inspired by other state management libraries like Flux and Redux which advocate for the separation of a shared state, the major difference between Vuex and these libraries is Vuex is geared more towards the reactive system of Vue.js

As mentioned earlier there are other state management libraries for Vue like Redux, so why should you use Vuex?

I will be demonstrating practically how to use Vuex to manage state in a Vue application by building a to do list. Open your terminal and run the code below to install vue-cli

The vue-cli is a standard tooling for Vue.js development. After installing the CLI run the code below to initialize a new Vue project

After initializing a Vue project, navigate to the project directory

Run the command below to install Vuex

After installation run the code below to start the application

Lastly, this is an optional step but very recommended: vue-devtools is a browser plugin that makes it easier to debug Vue.js applications, head over here to download and install the extension compatible for your browser.

Before we go ahead into integrating Vuex into our application let’s create the components we will be needing for the application.

This component will contain the list of Todos for the application. Create another file called TodoForm.vue in the components directory and paste the code below

This contains a form to add a new note to the note list. Go to App.vue and replace the contents with the code below

What we’ve done above is creating a store with an initial state object. Our state at the moment contains an array called todoList which will be responsible for storing the to-dos in our application.

The next step is to connect the store we’ve created to our application in order to have access to it in our components. Open main.js file and refactor it to look like the code below

The change we’ve made to this file is importing the store we’ve created and injecting it into the root component. If you have the vue-devtools installed you can take a look at the store by opening your browser console and navigating to the Vue tab.

Our to-do app will need some mutations to function, we want to be able to add to-dos, and update to-do items. Go back to your store.js and add this as a property after the state created earlier

To commit a mutation we use the store.commit() function. It accepts a string which is the name of the mutation and an optional payload which is the data to be passed to the mutation. We will be using these mutations in subsequent sections.

Getters provide a way of getting a computed state from the store so instead of fetching a state in your components and then making computations on the state you can make the computations using a getter. This helps when more than one component needs to make use of the same computed state.

If you notice from the code above you will see the getter accepts a state as a parameter that way it gives you complete read access to the state object. Getters can be fetched in components by either accessing it with store.getters or using a helper function from Vuex called mapGetters which is used in mapping store getters to local computed properties.

Actions are functions that dispatch mutations. They differ from mutations as they commit mutations instead of mutating the state directly. Since actions don’t modify a state directly they can be used to commit multiple mutations making it a better choice.

They can also be used to perform asynchronous operations, unlike mutations that are meant to be synchronous. A use case for actions is fetching data from an API and then committing a mutation that will modify the state based on the data received.

Let us create an action to get to-dos from an api and store them in the todoList state. Open the store.js file and refactor the actions property

Actions receive an instance of the store as a context object which gives us access to the same properties as that of the store like commit, state, and getter . The action we created makes a request to a fake API JSONPlaceholder to get an array of to-dos and then commits a mutation addTodos which was destructured from the context object to modify the todoList in state. In order to use an action we will need to trigger the action.dispatch() method which accepts the same parameters as a mutation.

We’ve been able to create state, mutations, and actions the next step is plugging all that into our components. Open the TodoList.vue and refactor the script with the code below

When this script runs we dispatch an action that we created earlier to get the to-dos from an api and then update the todoList state. We then get the list of to-dos from the store state in our todos function to use in our component. The number of completed to-dos is returned from the getter function getTodos and when a user toggles the checkbox of a to-do item it runs the updateTodo method which commits a mutation responsible for updating the completion status of a to-do item.

At this point, you should be able to see and update a list of to-dos on your browser 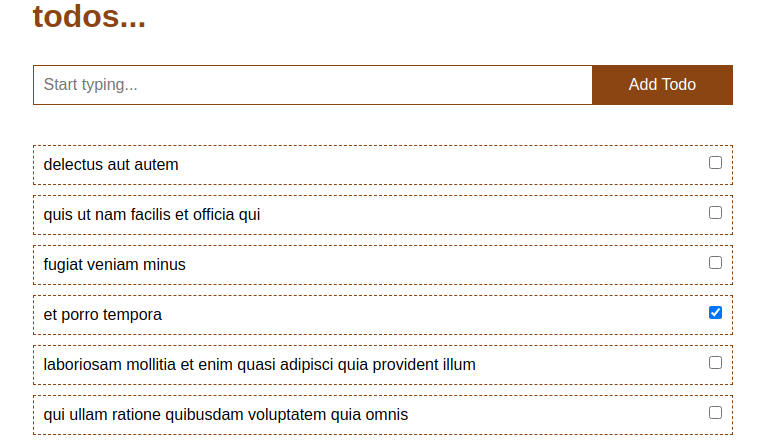 What’s left is making sure a user can create a new to-do item, so open the TodoForm.vue file and refactor the submitMethod to commit a mutation that adds a new to-do item to the state

Debugging a web application in production may be challenging and time-consuming. Asayer is a frontend monitoring tool that replays everything your users do and shows how your app behaves for every issue. It’s like having your browser’s inspector open while looking over your user’s shoulder.
Asayer lets you reproduce issues, aggregate JS errors and monitor your app’s performance. Asayer offers plugins for capturing the state of your VueX store and for inspecting Fetch requests and GraphQL queries. 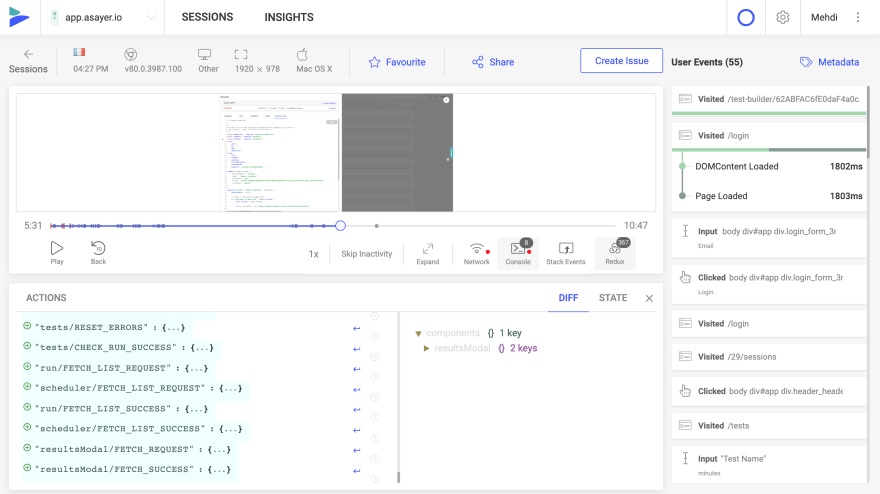 In this article, we have looked at the major concepts of Vuex: state, mutations, getters, actions, and how to integrate them into a Vue application. This is enough to get you going in creating Vue applications with Vuex, there are other advanced concepts not covered so be sure to check out the docs. The code for this article is available in this repo.

All about web services ,SOAP and REST API, answers to what, why and when of SOAP & REST API web services.