We define a Mediator as an object encapsulating interactions between other objects (components) from a given set. The pattern limits, or even cuts off completely, direct dependencies between classes. Components can only communicate with each other through the Mediator, which becomes the central hub for information and control. The Mediator controls the flow of information using its internal logic.

This can be compared to the air traffic control tower (ATC). Pilots of all planes from the area communicate with it, and it is the tower that decides the order of take-offs and landings. However, the ATC does not control the entire flight in all aspects, but only organizes the planes in relation to each other. Its easy to imagine the chaos, when the pilots of all machines had to communicate directly with each other to determine who was to land next.

For this reason, the Mediator pattern seems to me to fit rather for refactoring close-by classes, the number of interactions of which has already begun to disturb their maintenance, but have well-established responsibilities. In some cases, the use of Mediator will make sense from the very beginning of code development, but it can also be an overkill.

A fairly common use of this pattern is View Model known from Android Architecture Components. It intercepts interactions with the UI and, according to its logic, informs the data model and the other way around - it passes changes in the model to the UI.

The mediator has a very simple structure, there are 2 types of objects: 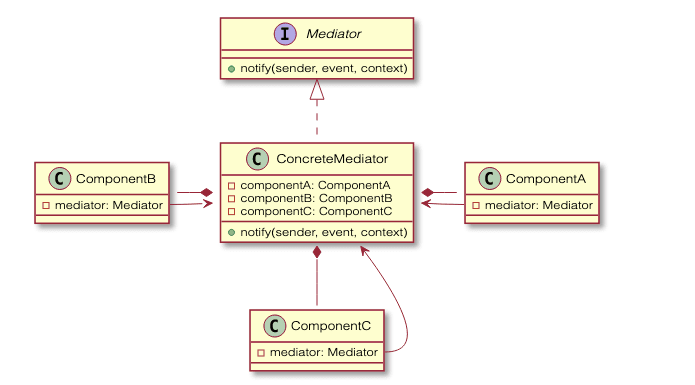 It is worth noting that the only interface needed is Mediator, which all thecomponents know. Each component is a separate and independent object that probably already inherits from another class or implements the needed interfaces. You may be tempted to introduce an additional Component interface, but it would not do much, because the Mediator needs to know the specific interfaces of its components to be able to call specific methods after receiving the message.

The mediator object can get components in the constructor, via DI, or even create the necessary instances and manage their lifecycle.

Let's see how it may look in code:

Instead of the notify(sender, event, context) method, I used method(sender, args) here, but the principle is the same, the Mediator interface determines the form of communication. The event in the former case can be an object inheriting from some generic interface, or a sealed class, which will create a nice closed set of events that is easier to navigate through.

Context can indicate where the message is coming from, e.g. whether the product was added to the shopping cart from the list of recommended additional products or directly from the product page. The arguments of the method, or even the Mediator methods, will depend heavily on the specific implementation, and the information needed.

A common example of using Mediator is dialog boxes that contain UI elements such as buttons and text inputs. Oftentimes, the state of user interface elements depends on one another. The "OK" button should be inactive, if not all required form fields have been filled, etc. If there are many view elements, the number of such dependencies between them may increase and be difficult to control.

Therefore, it is a good idea to have a central communication hub that will collect events from the UI elements and adjust the state of the displayed elements accordingly. The Dialog itself can be such a Mediator.

This allows reusing the implementation of the UI controls as they don't have any specific logic other than managing their state. The Delegates.observable in the TextBox class makes it easy to notify the view manager of a change. No need to do this in every place that updates the text field.

An interesting example of the 'Mediator' pattern is chat. We have participants who send messages publicly or directly to another participant, but it is the Chat object that decides who gets which message.

Since chat mode is initially PRIVATE, only the message with the recipient will be printed [Alice] gets: Bob says: hi Alice. The rest of the messages will go to the Mediator but not to the other participants. Changing the message delivery policy will have this effect for MIXED:

There's a bug here because Alice is getting a message from herself. Her hi all had no recipient, so it went to all participants - including herself. Just like Charlie answering hi Alice but without a recipient.

Participants do not need to know about each other to send messages to each other, this is handled by the Mediator in the form of aSuperChat object. Additionally, it has its internal messaging policy, it is not just a proxy between objects. The chat could have a list of muted participants who, e.g. temporarily and as a punishment, cannot send messages. But instead of blocking messages from being sent, you can block messages from being delivered without alerting the participant about the `shadowban.

Mediator is a very simple pattern in terms of structure, it's basically a single interface. There is no need to add this to the name of objects that act as Mediator. Depending on the implementation, Mediator may not even be visible outside, unlike the Facade, that by definition, is an entry interface to some functionality.
For this reason, I would definitely avoid using the name Mediator in class names. Even the notify() method can and should refer to the domain of the problem being solved, as in the send() chat. This pattern should be transparent outside the class group and be only an implementation detail, and organizational improvement.

The Mediator's job is to organize communication between close classes. The Mediator pattern cuts out dependencies between components. It takes over the interaction between them, becoming the main communication hub for a group of classes. There is a reverse of the controls because components are now just telling "what happened" instead of telling others to "do something". It can be found e.g. in the form of ViewModel in Android, where it separates UI interactions from data model changes.

The mediator, using internal logic, decides what to do with the information coming from one of his components. It can call a method on one or more components. Therefore, it needs to know the specific interfaces of the components, not some generics derived from the pattern. Theoretically, a Component may also have only the notify() method and decide for itself how to react to a given message from the Mediator (two-way mediation), but this significantly complicates the matter and starts to be a different pattern.

Be careful, so the 'Mediator' does not turn into a so-called god object, expanded and complex, containing much of the system logic. The mediator should be used locally rather than as an access interface to functionality, unlike Facade.

It's well suited for refactoring. If you have a group of related classes that are cumbersome to reuse by the number of dependencies. It also improves testing, because there is no need to create mocks for a group of classes, but only the Mediator. If all interactions between components are contained in the Mediator, using the same components but in a different context will only require writing a new Mediator.