The facade is a very basic pattern, whose task is to obscure the details of a group of classes - the module responsible for some functionality.

This can be compared to the facade of the building, which in itself has no function. The building consists of rooms, corridors, stairs, installations. It is the facade that indicates the entrance to the building, and the appearance may suggest its purpose.

The purpose of the pattern is to simplify customer access to the functionality of the obscured module. So that they don't have to know implementation details, class dependencies, which version of the object to inject, etc.

By module I will understand here some consistent and relatively independent parts of the system. Not necessarily a separate module in the project or a library - it can be, for example, a separate package.

The facade is basically single class. In the diagram it looks like this: 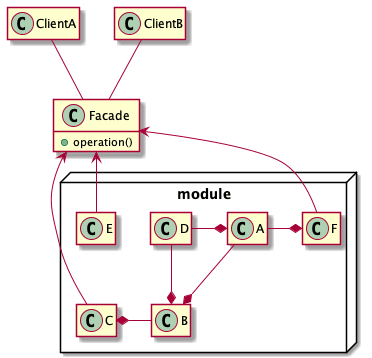 The classes A, B, C, D, E, F together form a module and provide some functionality. The facade is the access point to this functionality. As a result, no customer need not know the details of the module, to know how to create class instances and how to use them. Customers only need to know the facade, which can build a tree of dependencies for all classes, hide their implementations and provide a simple API for customers.

I was wondering if the Facade class shouldn't be inside a module. Such use of the facades is often found in libraries - they have a lot of internal logic, but provide only a simple API inside a single class and, if necessary, several configuration objects. However, Facade can be used to cover code that we have no control over, creating a so-called Anticorruption Layer. Then the code that changes behind it does not spoil the clients.

Let's assume the following situation: a client class needs the result of a method from one class, but this method requires the result of another class, which has several dependencies.

So how can Facade help here?

In other words, "the principle of minimum knowledge" or the "rule of limiting interactions". The idea is for classes to use only their methods or fields, and objects created by themselves or passed directly in method parameters. The facade perfectly helps to keep this good practice.

Looking at the previous example, without Facade, the client had to "know" a lot about the dependencies that had to be met to get the expected result. All these details were then hidden behind the Facade. In a way, the client may now say "I need the result, I don't care how you get it."

The downside of strictly applying this rule can be creating multiple methods that only delegate method calls to other internal objects. But if a class does have many delegating methods, maybe it does too much and should be broken down into smaller, more detailed classes?

A special case of Facade is the Repository. It allows access to domain objects, hiding the details of their storage. The Repository can hide the database, cache, or even communicate with a remote server. Or all of these things at once as in the example below:

Pay attention to the object interfaces. Both UserRepository andUserDb, UserApi andUserCache may have different implementations, but it doesn't matter for the client.

The repository takes care of storing objects in the cache or filling in the gaps in the local database with information from a remote server. The customer gets only the data in the fastest way possible. This approach makes testing incredibly easy, especially when you use interfaces and dependency injection. It also allows for the parallelization of the work of several people, where one deals with, for example, the UI layer displaying data, and the other creates its storage and access via HTTP or cache policy. It is especially interesting in interdisciplinary teams, where a mobile programmer can deal with the UI, and the backend one can deal with the data access layer in the application, without any knowledge of e.g. Android.

As in the previous post, I rather favor not adding "Facade" to the class name, which is a facade. This is seen in the example of the 'Repository', there is no need to inform customers that they are only dealing with the facade. Clients want it to perform an action, provided by the class, they do not need to know whether it is a facade. This is different for example for the Builder Pattern, which by definition should have the build() method. The facade does not have API enforced by the pattern itself.

The facade allows you to hide the details of the module from clients. It ensures compliance with Law Demeter. Using the generic interface and various implementations greatly simplifies testing. It blends well with other patterns like Strategy,Template Method, or construction patterns, allowing configuration of the object available for the clients. The facade is a good entry point for libraries, giving customers access to high-level functionality and hiding all internal logic and classes.

Shipping to Production - Final and Next