This fourth part aims to show you how you can utilize auto-scaling as your scaling strategy. We've shown you scaling with a desired state but this is probably even more powerful

In this article, we will cover the following:

So in our last part, we talked about desired state. That's an OK strategy until something unforeseen happens and suddenly you got a great influx of traffic. This is likely to happen to businesses such as e-commerce around a big sale or a ticket vendor when you release tickets to a popular event.

Events like these are an anomaly which forces you to quickly scale up. The other side of the coin though is that at some point you need to scale down or you suddenly have overcapacity you might need to pay for. What you really want is for the scaling to act in an elastic way so it scaled up when you need it to and scales down when there is less traffic.

Horizontal auto-scaling, what does it mean?

It's a concept in Kubernetes that can scale the number of Pods we need. It can do so on a replication controller, deployment or replica set. It usually looks at CPU utilization but can be made to look at other things by using something called custom metrics support, so it's customizable.

It consists of two parts a resource and a controller. The controller checks utilization, or whatever metric you decided, to ensure that the number of replicas matches your specification. If need be it spins up more Pods or removes them. The default is checking every 15 seconds but you can change that by looking at a flag called --horizontal-pod-autoscaler-sync-period.

The underlying algorithm that decides the number of replicas looks like this:

Ok, the first thing we need to do is to scale our deployment to use something other than desired state.

We have two things we need to specify when we do autoscaling:

Before we can attempt our scaling experiment we need to make sure we have the correct add-ons enabled. You can easily see what add-ons you have enabled by typing: 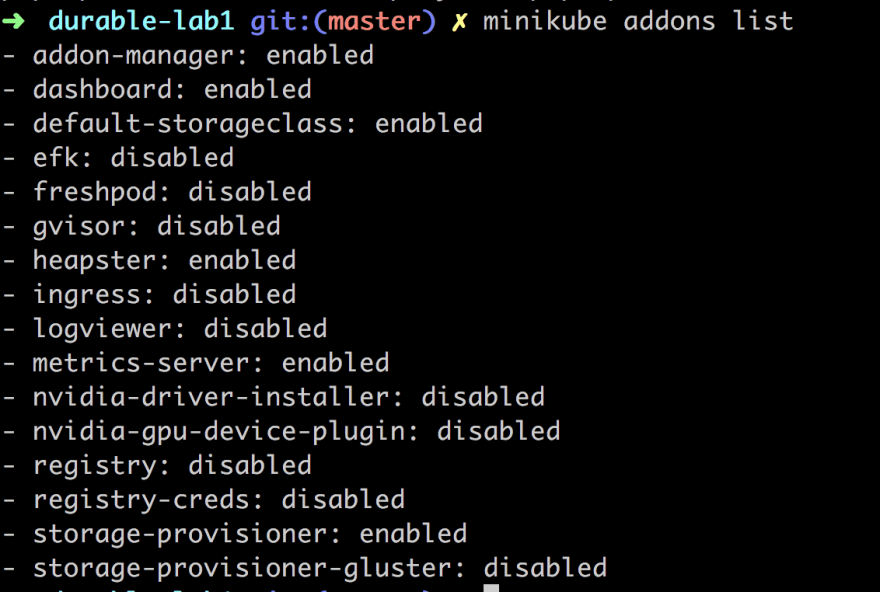 If it looks like the above we are all good. Why am I saying that? Well, what we need, to be able to auto-scale, is that heapster and metrics-server add ons are enabled.

We can easily enable them both with the following commands (we will need to for auto-scaling to show correct data):

We need to do one more thing, namely to enable Custom metrics, which we do by starting minikube with such a flag like so:

We need to do the following to run our experiment

Above we are creating a deployment php-apache and expose it as a service on port 80. We can see that we are using the image k8s.gcr.io/hpa-example

It should tell us the following:

Next up we will use the command autoscale. We will use it like so:

Next step is to send a ton of requests against our deployment and see our auto-scaling doing its work. So how do we do that?

First off let's check the current status of our horizontal pod auto-scaler or hpa for short by typing:

The above shows us two pieces of information. The first is the TARGETS column which shows our CPU utilization, actual usage/trigger value. The next bit of interest is the column REPLICAS that shows us the number of copies, which is 1 at the moment.

For our next trick open up a separate terminal tab. We need to do is to set things up so we can send a ton of requests.

Next up we create a container using this command:

This should take us to a prompt within the container. This is followed by:

The command above should result in something looking like this.

This will just go on and on until you hit CTRL+C, but leave it be for now.

This throws a ton on requests in while true loop.

I thought while true loops were bad?

They are but we are only going to run it for a minute so that the auto scaling can happen. Yes, the CPU will sound a lot but don't worry :)

Let this go on for a minute or so, then enter the following command into the first terminal tab (not the one running the requests), like so:

As you can see from the above the column TARGETS looks different and now says 339%/50% which means the current load on the CPU and REPLICAS is 7 which means it has gone from 1 to 7 replicas. So as you can see we have been bombarding it pretty hard.

Now go to the second terminal and hit CTRL+C or you will have a situation like this:

It will actually take a few minutes for Kubernetes to cool off and get the values back to normal. A first look at the Pods situation shows us the following:

As you can see we have 7 Pods up and running still but let's wait a minute or two and it should look like this:

Ok, now we are back to normal.

Now we did some great stuff in this article. We managed to set up auto-scaling, bombard it with requests and without frying our CPU, hopefully ;)

We also managed to learn some new Kubernetes commands while at it and got to see auto-scaling at work giving us new Pods based on our specification.

How to use Redis with WordPress (docker-compose)