Kubernetes is about orchestrating containerized apps. Docker is great for your first few containers. As soon as you need to run on multiple machines and need to scale/up down and distribute the load and so on, you need an orchestrator - you need Kubernetes

This is the first part of a series of articles on Kubernetes, cause this topic is BIG!.

In this part I hope to cover the following:

Well, it all started with containers. Containers gave us the ability to create repeatable environments so dev, staging, and prod all looked and functioned the same way. We got predictability and they were also light-weight as they drew resources from the host operating system. Such a great breakthrough for Developers and Ops but the Container API is really only good for managing a few containers at a time. Larger systems might consist of 100s or 1000+ containers and needs to be managed as well so we can do things like scheduling, load balancing, distribution and more.

At this point, we need orchestration the ability for a system to handle all these container instances. This is where Kubernetes comes in.

So what do we know about Kubernetes?

It's an open-source system for automating deployment, scaling, and management of containerized applications

Let'start with the name. It's Greek for Helmsman, the person who steers the ship. Which is why the logo looks like this, a steering wheel on a boat: 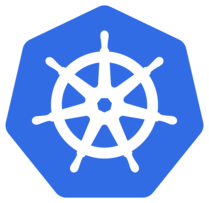 It's Also called K8s so K ubernete s, 8 characters in the middle are removed. Now you can impress your friends that you know why it's referred to as K8.

Here is some more Jeopardy knowledge on its origin. Kubernetes was born out of systems called Borg and Omega. It was donated to CNCF, Cloud Native Computing Foundation in 2014. It's written in Go/Golang.

If we see past all this trivia knowledge, it was built by Google as a response to their own experience handling a ton of containers. It's also Open Source and battle-tested to handle really large systems, like planet-scale large systems.

So the sales pitch is:

Run billions of containers a week, Kubernetes can scale without increasing your ops team

Sounds amazing right, billions of containers cause we are all Google size. No? :) Well even if you have something like 10-100 containers, it's for you.

Ok ok, let's say I buy into all of this, how do I get started?

Impatient ey, sure let's start to do something practical with Minikube

Ok, sounds good I'm a coder, I like practical stuff. What is Minikube?

Minikube is a tool that lets us run Kubernetes locally

Oh, sweet, millions of containers on my little machine?

Well, no, let's start with a few and learn Kubernetes basics while at it.

To install Minikube lets go to this installation page

It's just a few short steps that means we install

Get that thing up and running by typing:

You can also ensure that kubectl have been correctly installed and running:

Ok, now we are ready to learn Kubernetes.

In learning Kubernetes lets do so by learning more about kubectl a command line program that lets us interact with our Cluster and lets us deploy and manage applications on said Cluster.

The word Cluster just means a group of similar things but in the context of Kubernetes, it means a Master and multiple worker machines called Nodes. Nodes were historically called Minions

, but not so anymore.

The master decides what will run on the Nodes, which includes things like scheduled workloads or containerized apps. Which brings us to our next command:

What this tells us what Nodes we have available to do work.

Next up let's try to run our first app on Kubernetes with the run command like so:

Next up lets check that everything is up and running with the command:

This shows the following in the terminal:

In putting our app on the Kluster, by invoking the run command, Kubernetes performed a few things behind the scenes, it:

Next up we are going to introduce the concept Pod, so what is a Pod?

A Pod is the smallest deployable unit and consists of one or many containers, for example, Docker containers. That's all we are going to say about Pods at the moment but if you really really want to know more have a read here

The reason for mentioning Pods at this point is that our container and app is placed inside of a Pod. Furthermore, Pods runs in a private isolated network that, although visible from other Pods and services, it cannot be accessed outside the network. Which means we can't reach our app with say a curl command.

We can change that though. There is more than one way to expose our application to the outside world for now however we will use a proxy.

Now open up a 2nd terminal window and type:

This will expose the kubectl as an API that we can query with HTTP request. The result should look like:

Instead of typing kubectl version we can now type curl http://localhost:8001/version and get the same results:

The API Server inside of Kubernetes have created an endpoint for each pod by its pod name. So the next step is to find out the pod name:

This will list all the pods you have, it should just be one pod at this point and look something like this:

Then you can just save that down to a variable like so:

Lastly, we can now do an HTTP call to learn more about our pod:

This will give us a long JSON response back (I trimmed it a bit but it goes on and on...)

Maybe that's not super interesting for us as app developers. We want to know how our app is doing. Best way to know that is looking at the logs. Let's do that with this command:

As you can see below we know get logs from our app:

Now that we know the Pods name we can do all sorts of things like checking its environment variables or even step inside the container and look at the content.

This yields the following result:

Now lets step inside the container:

We are inside! This means we can see what the source code looks like even:

Inside of our container, we can now reach the running app by typing:

This is where we will stop for now.
What did we actually learn?

Feel like you have a ton more to learn? You're right this is a big topic.

I hope you follow along on the next upcoming parts where we will learn more about Nodes, Pods, Services, Scaling, Updating and eventually how to use a managed service in the Cloud.

Calculate the Volume of a Cube in Java