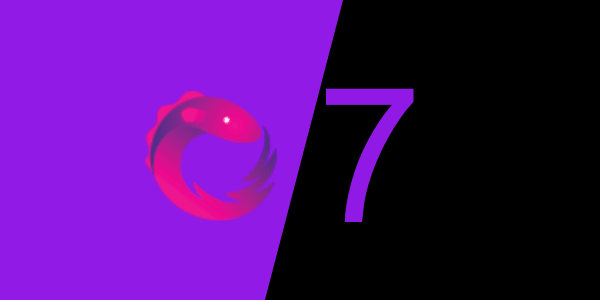 RxJS 7 has shipped! For us Angular developers, it unfortunately did not ship in time for Angular 12.

I've summarized key takeaways from Ben Lesh’s talk from RxJS Live Asia and his slides below. Lesh is a member of the RxJS core team and formerly worked at Google on the Angular team.

Lesh said while RxJS 7 was “a bit faster,” the big improvement for the new version is its bundle size. RxJS 7 is 53% the size of RxJS 6. If your app used every operator in version 6, that would require 52 KB, but the same thing in RxJS 7 requires just 19 KB.

“This was done via a refactor, a hundred-point improvement of going around and individually moving around code, keeping the same tests, keeping the same code, and moving things around slowly but surely until we got to a place where we could see daylight and we were able to refactor larger portions of the code,” Lesh said in his talk.

See this chart of operator sizes in RxJS 6: 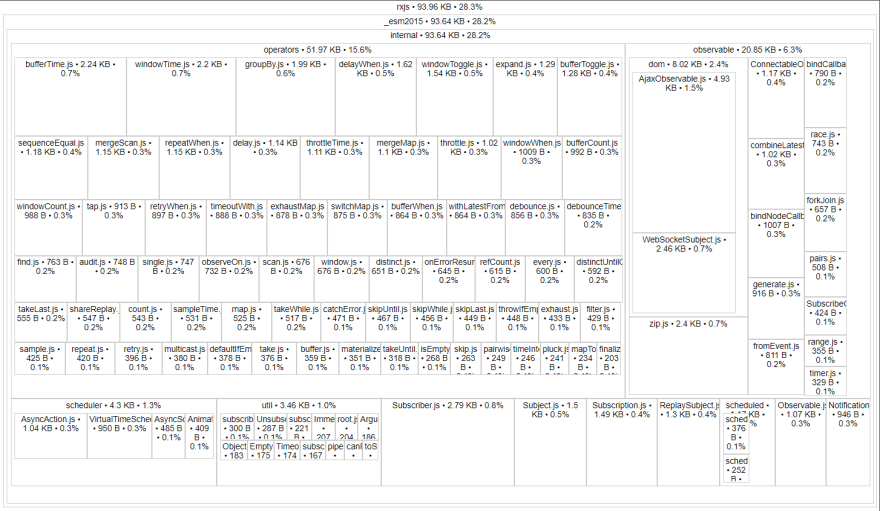 And this chart of the same operator sizes in RxJS 7: 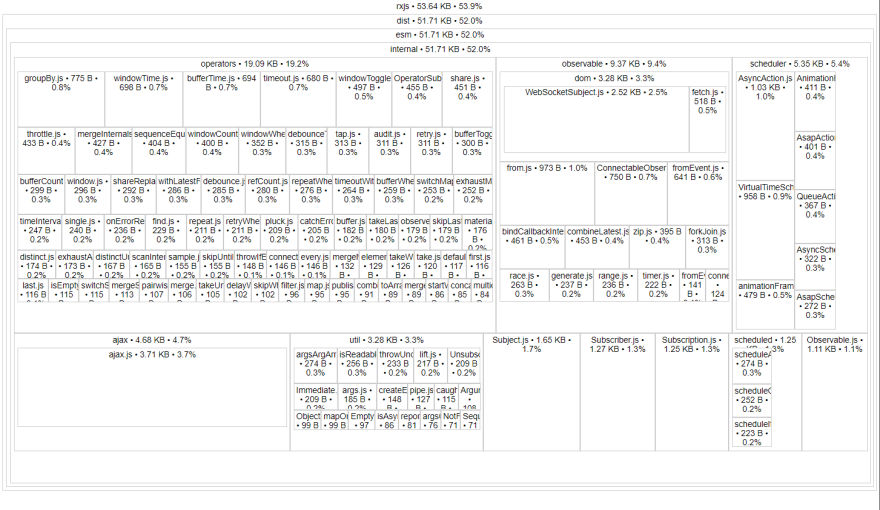 Lesh’s talk includes a long discussion about how many ways RxJS lets you share a stream (multicast, shareReplay, refCount, etc).

RxJS 7 deprecates multicast, publish, publishReplay, publishLast, and refCount. shareReplay was too popular to deprecate in 7, but Lesh said it's next because it is "full of footguns.” Long term, the only sharing operators will be share, connect and connectable. He recommends moving to share now.

share is picking up some new features as the single solution operator. It takes an optional config object as a parameter, where you can define custom behavior for the stream.

For teams that are unable to upgrade to TypeScript 4.2, Lesh recommended staying on RxJS 6, which the RxJS team will continue to support.

The problem with toPromise(), Lesh explained, was that it didn't make sense with Observables. Should a promise created by toPromise() resolve with the first or last value emitted from the source Observable?

So, toPromise() is deprecated in favor of lastValueFrom() and firstValueFrom(). These new functions still convert Observables to Promises, but in a way that clarifies that value the Promise will resolve with.

If an Observable completes without emitting a value, the Promise created by lastValueFrom or firstValueFrom rejects. If that is not desired behavior, you can configure the new Promise to resolve with a defaultValue.

Anywhere you can pass an Observable, RxJS 7 also lets you pass an AsyncIterable.

Your with Is My Command

Recommendations for Migrating to RxJS 7

If your project can be upgraded to RxJS 7, I would recommend doing so. The speed and bundle size improvements offer tangible, immediate benefits to end users.

If you need help upgrading to RxJS 7, fill out this form. Bitovi has a team of Angular and RxJS experts who can help your team.

Authentication with Firebase in NextJS, with SSR!

Once suspended, bitovi will not be able to comment or publish posts until their suspension is removed.

Once unsuspended, bitovi will be able to comment and publish posts again.

Once unpublished, all posts by bitovi will become hidden and only accessible to themselves.

If bitovi is not suspended, they can still re-publish their posts from their dashboard.

Once unpublished, this post will become invisible to the public and only accessible to Kyle Nazario.

Thanks for keeping DEV Community 👩‍💻👨‍💻 safe. Here is what you can do to flag bitovi:

Unflagging bitovi will restore default visibility to their posts.