A few days ago, Stimulus 2.0 has finally been released. One of the key new features is the Values API that is supposed to replace the original ”Data API“ and become the main means of managing state in Stimulus controllers (besides Targets). The new API is documented in the Handbook as well as the Reference and I’ve also written about this feature before.

One thing about the Values API that I couldn’t wrap my head around were the Value changed callbacks. These are callback methods in the controllers that are called whenever the DOM data- attribute for the corresponding Value changes. I had no problem understanding them technically but couldn’t think of any real−world use case that would substantially benefit from this pattern. But the Basecamp people must have had a good reason to add this, they are not particularly known for frivolously adding new features!

So I gave it a deeper thought and eventually came up with a few usage patterns that make sense to me. So here they are:

One of the patterns is actually mentioned in the Handbook itself. Stimulus 2 automatically generates getters and setters for all Values defined in the controller. Thanks to setters, we can now write this.someValue = 1234 and the corresponding data- attribute will get automatically updated in the DOM, saving the state for us.

Now, what if we need to run some JavaScript based on the Value state, perhaps to update the UI accordingly? We could run the code right after each setting of the Value, like this:

but that results in a lot of repeated code that is easy to mess up.

Note that in Stimulus 1, we had to write a setter ourselves so we had a natural place to add such code:

In Stimulus 2, the setters are already ”baked-in“ outside our code and that’s where the change callbacks come to help: a Value change callback is a specially−named method that will be called with every change of the Value:

Using change callbacks we can get our controllers to a similarly DRY shape as we were able to in Stimulus 1.

This is all nice but change callbacks don’t just listen to Value updates in the controller code. They also trigger upon changes of the corresponding data- attributes in the DOM, i.e. they listen to external updates of the Values! This feature can be useful in many ways.

Suppose that our Stimulus controller has to interact with a page widget that is otherwise governed by some legacy JavaScript code. Be it some external JS library or a complex custom legacy JS, we’re talking about code that is not possible or easy to rewrite to Stimulus. We don’t need to make this JS code to talk to our controller directly, what we need is to make it update the data- attributes in the DOM instead.

There is a basic JS fiddle that demonstrates this (it’s a follow-up of a ”currency converter“ I’ve shown before). The legacy code is approximated here as a JS timer which, being triggered 5 seconds after the page load, changes the currency rates that the Stimulus controller calculates with. The relevant code snippet for this is the following:

Just try running the fiddle, put a ”price“ in the input and watch the converted prices recalculate automatically after 5s. The trick here is that the timer code does not have to communicate directly with the controller, in fact, it does not even have to know that such a controller exists! All it has to do is update a data- attribute in the DOM and the controller’s change callback takes care of the rest.

So far we’ve seen the change callbacks triggered by front-end events but this does not have to be the case − with a bit of help, callbacks can respond equally well to page updates originating from the back-end.

A notable example is StimulusReflex, the framework that uses ActionCable web sockets for asynchronous communication between front-end and back-end. Here, the actual means of data transfer between front- and back-end is not that important, more interesting is that StimulusReflex uses morphdom, an ingenious little library that can transform a part of the current page DOM efficiently into an updated HTML that it takes as input. The new HTML is typically rendered on the back-end and sent over the wire by StimulusReflex to the browser where the morphdom library morphs it into the current page (without reloading the page).

By the way, DHH promises a ”New magic“ to be released soon that should bring rich client-side interactivity without having to write a ton of JavaScript (supposedly using a similar concept to StimulusReflex). If my guess (based on what we can see on the hey.com site) is right, the new magic will work comparably to StimulusReflex, only perhaps a bit less efficiently, as it probably will not use morphing but will replace whole updated elements. We’ll see soon!

Now, it just came to my mind that the Values API (together with change callbacks) could be used for inter-controller communication, too. If any code, inside or outside a Stimulus controller, can affect a data- attribute value, it can also trigger behavior of the controller handling that value. Somehow it feels like triggering a (change) event in the target controller with a value parameter passed in.

Finally, it might as well be you who alters a controller-governed value, right in the Developer tools console! For a real−world example and if you have a Hey account, just try searching for something in the Imbox, open up the Dev Tools and search through the HTML for the data-search-selected-index-value attribute. You can now change its value and observe the effect - the bluish background selection will move among the results according to your input! 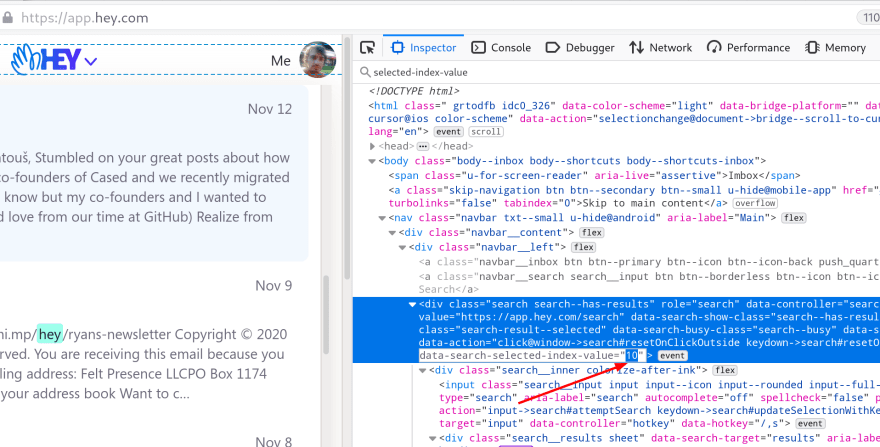 To conclude, Stimulus 2 change callbacks follow the classic Rails pattern of callbacks, this time in the client-side code. They watch updates on an element attribute and act according to its value. As with all callbacks on general, this leads to some indirection in the flow of the front-end code and a developer reading the corresponding HTML must be aware of the Stimulus conventions to know where to look for the related behavior. But hey, this is the Rails way!

How to implement Decorator pattern in Ruby on Rails?

Updates from the 93rd TC39 meeting

Once suspended, borama will not be able to comment or publish posts until their suspension is removed.

Once unsuspended, borama will be able to comment and publish posts again.

Once unpublished, all posts by borama will become hidden and only accessible to themselves.

If borama is not suspended, they can still re-publish their posts from their dashboard.

Once unpublished, this post will become invisible to the public and only accessible to Matouš Borák.

Thanks for keeping DEV Community 👩‍💻👨‍💻 safe. Here is what you can do to flag borama:

Unflagging borama will restore default visibility to their posts.