Often I'll hear about how you can optimise a for loop to be faster or how switch statements are slightly faster than if statements. Most computers have more than one core, with the ability to support multiple threads. Before worrying about optimising for loops or if statements try to attack your problem at a different angle.

Divide and Conquer is one of the ways to attack a problem from a different angle. Throughout this article, I'm going to talk about creating a divide and conquer solutions and what it is. Don't worry if you have zero experience or knowledge on the topic. This article is designed to be read by someone with very little programming knowledge.

I'm going to explain this using 3 examples. The first will be a simple explanation. The second will be some code. The final will get into the mathematical core of divide and conquer techniques. (Don't worry, I hate maths too).

What is divide and conquer? 🌎

Divide and conquer is where you divide a large problem up into many smaller, much easier to solve problems. The rather small example below illustrates this. 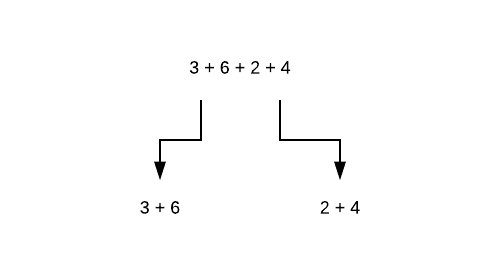 Let’s say we have 8 numbers:

And we want to add them all together. We first divide the problem into 8 equal sub-problems. We do this by breaking the addition up into individual numbers.

We then begin to add 2 numbers at a time.

Then 4 numbers into 8 numbers which is our resultant. 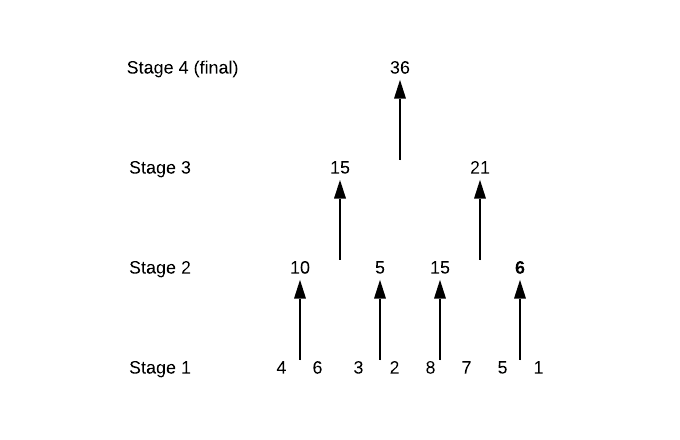 A divide and conquer algorithm tries to break a problem down into as many little chunks as possible since it is easier to solve with little chunks. It typically does this with recursion.

Formally the technique is, as defined in the famous Introduction to Algorithms by Cormen, Leiserson, Rivest, and Stein is:

If the problem is small, then solve it directly. Otherwise, divide the problem into smaller subsets of the same problem.

Conquer the smaller problems by solving them recursively. If the subproblems are small enough, recursion is not needed and you can solve them directly.

Recursion is when a function calls itself. It's a hard concept to understand if you've never heard of it before. This page provides a good explanation. In short, a recursive function is one like this:

I'll fully explain the code in a second.

Take the solutions to the sub-problems and merge them into a solution to the original problem.

With the code from above, some important things to note. The Divide part is also the recursion part. We divide the problem up at return n * recur_factorial(n-1).

Specifically, the recur_factorial(n-1) part is where we divide the problem up.

The conquer part is the recursion part too, but also the if statement. If the problem is small enough, we solve it directly (by returning n). Else, we perform return n * recur_factorial(n-1).

Combine. We do this with the multiplication symbol. Eventually, we return the factorial of the number. If we didn't have the symbol there, and it was return recur_factorial(n-1) it wouldn't combine and it wouldn't output anything remotely similar to the factorial. (It'll output 1, for those interested).

We're going to explore how divide and conquer works in some famous algorithms, Merge Sort and the solution to the Towers of Hanoi.

Merge Sort is a sorting algorithm. The algorithm works as follows: 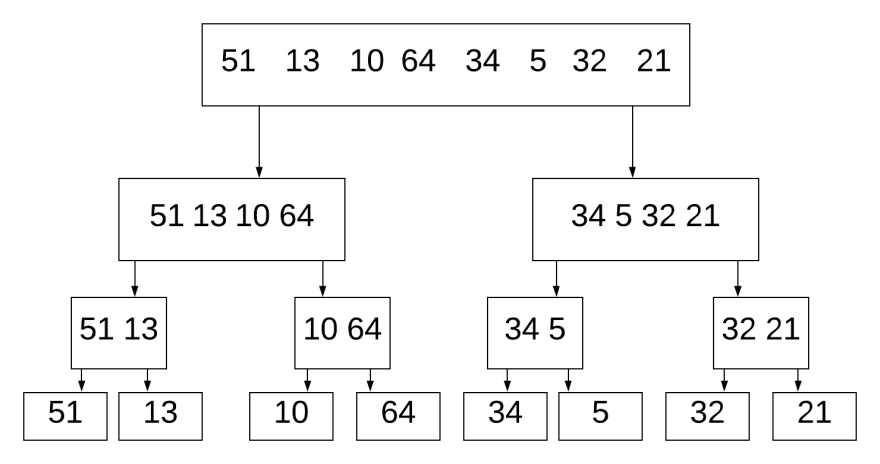 In this image, we break down the 8 numbers into separate digits. Just like we did earlier. Once we've done this, we can begin the sorting process.

In recursion we use the term base case to refer to the absolute smallest value we can deal with. With Merge Sort, the base case is 1. That means we split the list up until we get sub-lists of length 1. That's also why we go down all the way to 1 and not 2. If the base case was 2, we would stop at the 2 numbers.

If the length of the list (n) is larger then 1, then we divide the list and each sub-list by 2 until we get sub-lists of size 1. If n = 1, the list is already sorted so we do nothing.

The Towers of Hanoi is a mathematical problem which consists of 3 pegs and in this instance, 3 discs. This problem is mostly used to teach recursion, but it does have some real world uses.

Each disc is a different size. We want to move all discs to peg C so that the largest is on the bottom, second largest on top of the largest, third largest (smallest) on top of all of them. There are some rules to this game:

To solve the above example we want to store the smallest disc in a buffer peg (1 move). See below for a gif on solving Tower of Hanoi with 3 pegs and 3 discs.

Notice how we need to have a buffer to store the discs.

Let's begin to code the algorithm for ToH, in pseudocode.

We start with a base case, disk == 0. source is the peg you're starting at. dest is the final destination peg. spare is the spare peg.

Notice that with step 1 we switch dest and source. We do not do this for step 3.

With recursion, we can be sure of 2 things:

The algorithm gets a little confusing with steps 1 and 3. They both call the same function. This is where multi-threading comes in. You can run steps 1 and 3 on different threads - at the same time.

Since 2 is more than 1, we move it down one more level again. So far you've seen what the divide and conquer technique is. You should understand how it works and what code looks like. Next, let's learn how to formally define an algorithm to a problem using divide and conquer. This part is the most important in my opinion. Once you know this, it'll be exponentially easier to create divide and conquer algorithms.

We can describe this relation using a recursion. A recurrence is an equation which defines a function in terms of its smaller inputs. Recurrence and recursion sound similar and are similar.

With Fibonacci numbers if n = 0 or 1, it results in 1. Else, recursively add f(n-1) + f(n -2) until you reach the base case. Let's start off by creating a non-recursive Fibonacci number calculator.

The Fibonacci numbers are the last two numbers added together.

Now we've seen this, let's turn it into recursion using a recurrence.

When creating a recurrence, we always start with the base case. The base case here is if n == 0 or 1, return n.

If we don't return n, but instead return 1 this leads to a bug. For example, F(0) would result in 1. When really, it should result in 0.

With knowledge of divide and conquer, the above code is cleaner and easier to read.

We often calculate the result of a recurrence using an execution tree. Computer overlords 🤖 don't need to do this, but it's useful for humans to see how your divide and conquer algorithm works. For F(4) this looks like: 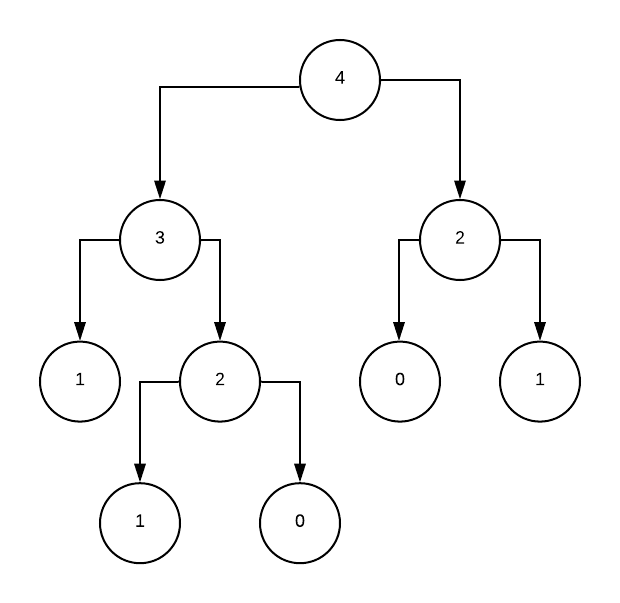 Once you've identified how to break a problem down into many smaller pieces, you can use concurrent programming to execute these pieces at the same time (on different threads) thereby speeding up the whole algorithm.

Divide and conquer algorithms are one of the fastest and perhaps easiest ways to increase the speed of an algorithm and are incredibly useful in everyday programming. Here are the most important topics we covered in this article:

The next step is to explore multithreading. Choose your programming language of choice and Google, as an example, "Python multithreading". Figure out how it works and see if you can attack any problems in your own code from this new angle.

You can also learn about how to solve recurrences (finding out the asymptotic running time of a recurrence), which is the next article I'm going to write. If you don't want to miss it, or you liked this article do consider subscribing to my email list 😁✨

Karateka 🥋, Writer 📕, Reader 📚, Dog Lover 🐶 If you like my articles, consider subscribing to me via email ✨ https://page.skerritt.blog/main-signup/

A walk through of database design and an explanation of normalization.

Any modern django book with a reliable writer ?

A better way to copy text to Clipboard in JavaScript