This is part of a series about porting the Elm language to WebAssembly. It's a project I am doing as a hobbyist, not an official project by the core team.

Elm Custom types are collections that the Elm programmer can define. They can have different variants, each with a "constructor" to identify it. And each constructor can contain some collection of values.

Let's take a simple example where one constructor takes no parameters and the other takes two. We'll then look at how to implement this as a byte-level data structure.

Each value of this type will need

An implementation is shown in the diagram below. (Each small box represents a 32-bit value.)

The ctor field identifies the constructor variant of the type the value is. It value needs to be unique within a given type so that we can implement pattern matching. It doesn't need to be unique within the program because the Elm compiler ensures that we can never compare or pattern-match values of different types. (Though with 32 bits, we get around 4 billion constructors. So it's easy to make them globally unique, and it can be handy for debugging).

Variants that take parameters will have an associated constructor function, generated by the compiler.

Variants that take no parameters are static constants in the program, without a constructor function. There only needs to be one instance of the value per program. For example the list [Ctor0, Ctor0, Ctor0] would just contain three pointers to the same memory address where Ctor0 is located.

The Unit type is just like a custom type with a single constructor. It has its own special symbol () in Elm source code but it's otherwise equivalent to the definition below.

Bool follows the same structure as custom types. It has two constructors:

True and False are constructors without any parameters, so they can be global constant values, defined once per program at a fixed memory location.

An alternative way to implement Bool would be to just use the integers 1 and 0, and that would make a lot of code more efficient. However a complication arises when we want to create something like a List Bool. Normally a Cons cell in a List contains a pointer to its head value. But now we're saying that True is not a pointer, it's just a literal number! That means the head of a Cons cell might be a pointer or it might be just an integer, it depends! We need infrastructure in the compiler and runtime to resolve that ambiguity. Almost all mature language runtimes do this, but my project is not quite that mature yet.

The basic operators that work on extensible record types are accessor functions and update expressions. In both cases we need to find the relevant field in a particular record before we can do anything with it. So there needs to be some mechanism to look up the position of a field within a record.

In Elm source code, fields are human-readable labels for parameters of a Record. But they can be represented in more efficient ways. For example the 0.19 compiler in --optimize mode converts field names to unique shortened names in the generated JavaScript.

For a lower-level target like Wasm, we can transform field names to integer IDs rather than shortened names.

There are two ways to do this

All C code refers to Record fields using the enum members, which the C compiler later transforms to numbers. This approach helps with readability of the C code when debugging the compiler.

Let's see how we can represent records, using the following value as an example

This can be represented by the collection of low-level structures below. For illustration, we assume the compiler has converted the field name field123 to the integer 123, and field456 to 456. Integers and pointers are 32 bits and so take up 1 size unit, Floats are 64 bits and take up 2 size units. 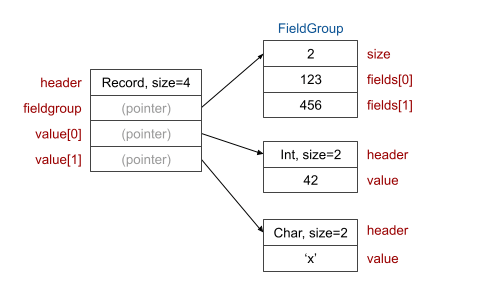 The FieldGroup data structure is an array of integers with a size. It is a static piece of metadata about the record type ExampleRecordType. My fork of the Elm compiler generates one instance for each record type, and populates it with the relevant integer field IDs. All records of the same type point to a single shared FieldGroup. The FieldGroup does not need a header field since it can never be confused with any other type. It only be accessed through a Record and is not garbage-collected since it's static data.

The Record itself is a collection of pointers, referencing its FieldGroup and its parameter values. The value pointers are arranged in the same order as the field IDs in the FieldGroup, so that accessor functions and update expressions can easily find the value corresponding to a particular field ID.

To implement an expression like myRecord.field123, the algorithm is as follows

An Elm accessor function is a special function that looks up a particular field name.

Here, .field123 is a function that will access field123 of any record that contains it.

The simplest way to implement this is to define a kernel function that can access any Record field by ID, taking the field ID as the first parameter. Then we can just use partial application to specialise it to a specific field in the generated code.

If you're interested in more details, check out the full source, and perhaps read my previous post on Elm functions in Wasm to see how partial application is implemented.

In Elm 0.19 this is implemented by a JavaScript function that clones the old record, and then updates each of the selected fields in the new record.

We can do something similar in C as follows:

I've left out the details of clone and fieldgroup_search but they pretty much do what you'd expect. Feel free to take a look at the full source code, which includes tests that mimic generated code from the compiler.

OCaml has records, but not extensible record types. That means a given field always refers to the same position in a record type, so there's no need to search for it at runtime. All field names can safely be transformed into position offsets at compile time.

Haskell has extensible records, and the original paper on them is here. The focus is very much on trying to make the record system backwards-compatible with Haskell's pre-existing types, which were all positional rather than named. Unfortunately this means that most of their design decisions were driven by a constraint that Elm just doesn't have, so I didn't find it directly useful.

However the FieldGroup concept is very much inspired by the InfoTable that is generated for every type in a Haskell program.

Framr - Give Your Demo Video a Fancy Gaussian Blur Frame

How to Manipulate Complex Objects in JavaScript

Once suspended, briancarroll will not be able to comment or publish posts until their suspension is removed.

Once unsuspended, briancarroll will be able to comment and publish posts again.

Once unpublished, all posts by briancarroll will become hidden and only accessible to themselves.

If briancarroll is not suspended, they can still re-publish their posts from their dashboard.

Once unpublished, this post will become invisible to the public and only accessible to Brian Carroll.

Thanks for keeping DEV Community 👩‍💻👨‍💻 safe. Here is what you can do to flag briancarroll:

Unflagging briancarroll will restore default visibility to their posts.