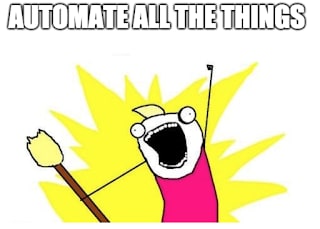 I'm a huge fan of automation for situations where I find myself doing something mindlessly over and over again, like punching a clock. The way I approach these problems is to find a way to eliminate some portion of the task and iterate till it just happens on it's own.

To avoid confusion, when I say punching a clock what I mean is knowing a rough approximation of how long I worked on a given day so that when I need to put in my "billable vs. non-billable" time at the end of the week I have a rough idea of how much time I spent on working each day. As such the way I "manually" accomplished this was putting the time I arrived at work and the time I left into a spread sheet.

So, step one, avoid having to open excel to enter the information. This was easy using a feature of Office 365 called Flow. It's an application that smells very similar to the populate If This Then That site (a.k.a. IFTTT.com). Flow makes it easy to setup operations that interact with other parts of Office 365, such as creating files in OneDrive based off of attachments in an e-mail, creating reminders in Outlook, even putting info into a spreadsheet.

All flows are comprised of at least two parts. An event/trigger and an action. For example, I could create a flow which would be described as follows...

Every time I receive an e-mail (i.e. trigger/event) take all attachments on the e-mail and place them in OneDrive under a folder with the same name as the "from" e-mail address (i.e. action taken).

So in my case, the action was pretty easy, put a row of data in a spread sheet. But what would be my trigger? After some digging I landed on an interesting feature of Flow the application. Along with the Web Site/App up in the Office 365 subscription there is a mobile application you can install on any mobile device. Along with that you can create a "button" which can act as a trigger, so right from your phone you just tap and the trigger is fired. It has the added bonus of providing GPS data, if you chose, which can also be embedded in the flow for use in the action. So now my flow could be described as..

Every time I press a button in the mobile Flow App on my device (i.e. trigger/event) put a row of data in a spread sheet I specify that includes the time the flow started to represent when I start/end work along with the GPS of where I pressed the button (i.e. action taken)

At first I thought this was great and wonderful and was impressed that I had done all of this in the course of a few hours. However, after the novelty wore off I found that often I would forgot to press the button, and per my original goal I was still mindlessly doing something, even if it was a much smaller process.

Enter IFTTT. IFTTT is probably also something that an enterprise could use; however, I most often think of it as a consumer service. IFTTT has a much easier way to describe creating activities, which they refer to as recipes. These recipes have the same "ingredients" as a flow. A trigger followed by an action. I should mention that Flow seems to be easier to customize as well as to support more extensive chained activities, but I digress. IFTTT also has a mobile app and, unlike flow, it supports GEO-Fencing, or the idea of a trigger based on entering or exiting a set of geo coordinates.

I had already been using IFTTT for my "personal" automation projects. As such I had already had been using IFTTT to trigger an SMS to my lovely wife when I arrived at work or when I was heading out. In hindsight I'm wondering why this didn't hit me right away, but simply forwarding the SMS I sent to my spouse as an e-mail to my work address could be the I needed for the FLOW.

So by "coupling" IFTTT and FLOW I was able to get the best of all worlds. I just go about my business and my spread sheet is updated for me. I even left the button flow in place so that when I work remote I can still keeping things down to a single button press and move on.

What type of activities would like to automate in your day to day routine?

How to Optimize Lambda Memory and CPU

how to take a screenshot of your Selenium test with Python

Introducing Conference App in a Box

Brian Nipper
Developer always looking to try and get better at this "thing" we do with software. I have found the Joel Spolsky catch phrase is a great thing to strive towards... "Smart and Get's things Done"
Your favorite free hosting site? 🌐
#discuss #webdev #beginners #help
Find a Partner
#webdev #angular #discuss
Understanding infrastructure as code
#devops #serverless #beginners #cloud