Read the full article or watch me code this on Youtube:

Getting started with CSS grid layout

If you take a look at your credit card or search for images of it, you'll notice that there is certain information being placed in specific spots. So the layout does not follow a specific flow of text, but is rather explicitly / absolutely positioned. Finally, with CSS Grid Layout we have something at hand which makes tasks like this so much easier.

Remember those times where tables were used to setup the layout of a web page? If you're lucky you don't as it was anything else but fun. CSS Grid Layout is here to make up for it. It works kind of similar, as it divides a container into a grid of rows and columns. The child elements of the container then can be assigned to specific cells of that grid and can also span multiple adjacent cells. 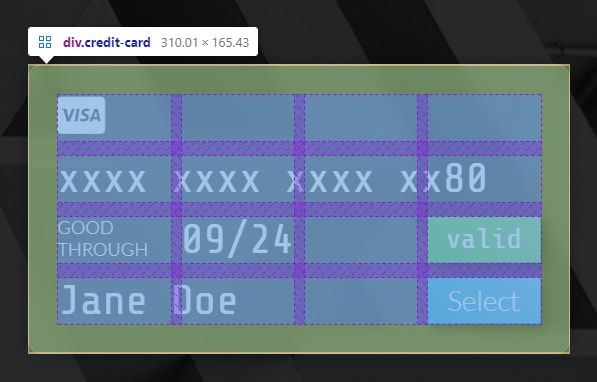 So for the basic markup, there's a wrapping div.credit-card which is going to be the grid layout container. The nested children contain the information like credit card number, card holder, date of validity, etc.

Let's first apply some styling to the container by e.g.

Via grid-template-rows|columns the number and proportions of the rows and columns can be defined. In our case we want 4 equally sized columns that add up to the entire vertical/horizontal space available. And instead of writing 1fr 1fr 1fr 1fr we simply use the repeat(count, dimension) function.

Through grid-column|row-gap we can define the spacing between all rows and columns. And this is also where the fr unit comes into play. We could have also used 25% when sizing the rows and columns. But as soon as you do so, the gaps make the entire container grow as it is put on top of the 25%. fr is a so called fraction of the available space and takes the gaps correctly into account. So each row / column takes an equal fraction of the available space after the gaps have been deducted from it.

In order to position items in the grid, it is necessary to assign them to cells. Each cell has a row and a column number identifying its position in the grid. However, this can become quite tedious and not very robust towards changes in the layout. This is where grid-template-areas help a great deal. grid-template-areas allows us to assign cells an area name. It is also possible to assign multiple adjacents cells the same area name.

So in the first line of the grid only the provider is given, the rest of the cells do not belong any named area which is indicated by the dots.

In the second line the number takes all four cells, which is why that identifier is repeated multiple times each separated by a space.

Now each child simply gets its area name assigned and is automatically spanned across the cells that belong to that area. As simple as that.

Heads up: There are no quotes around the grid area names.

Now let's also make it pretty by giving the validity indicator a happy green color and a slight shine with a gradient running from transparent black to a 20% white. An additional box-shadow makes it also stand out a little more. The text is centered both horiztonally and vertically using flexbox in conjunction with justify-content: center; and align-items: center;

Almost the same goes for the select button, except for the color (it's going to be blue) and the font (no serifs):

And finally let's add a playful vibe to the select button, by making the box-shadow and transform properties transitionable. So each time the user clicks the button, the box shadow is lowered and the button shifted 1px each left and upwards in order to provide a push effect:

Consider This Before Starting Your Spotify API Project

Getting set up with Hugo

Once suspended, crayoncode will not be able to comment or publish posts until their suspension is removed.

Once unsuspended, crayoncode will be able to comment and publish posts again.

Once unpublished, all posts by crayoncode will become hidden and only accessible to themselves.

If crayoncode is not suspended, they can still re-publish their posts from their dashboard.