ddev is just a helper for the usage of docker. It streamlines the way you interact and configure docker for web development to only a few commands and a config file.

If you're already confident with your web development process or your
already happily using docker in one or the other way - this might not be much of a benefit for you.

But, if you do not use docker at all or don't know where to start or just want to spice (speed) things up a notch, then read on.

ddev lets you focus more on your code and less on dev-ops.

I used to set-up my web development projects directly on my Ubuntu-driven machine with apache's v-hosts. I had a bash-script in place which created a new directory, git repo and added a new host.

But, this had some flaws and required manual steps afterwards pretty often. In short, it got time-consuming to maintain the custom set-up script and all the changes that were made to my system... With more and more projects my time got short and I hesitated to try and learn something thats new to me like docker.

At that time, at my workplace we all used MacBooks for development while personally I am more of a Linux guy. The solution of my workplace (MAMP) was not applicable for my personal projects.
Gladly, I changed workplaces the right time and I got introduced to a new way of how to work on web development project: ddev.

Why would you use ddev and not plain docker instead?

Using plain docker for web development would require you to either use a pre-made image or build one for your self.
If you don't have special needs and only need the general stuff like php, apache and mysql, then you can save yourself some time by not re-inventing the wheel and just using ddev which comes with a pre-defined image.

And it gives you even more:

Why ddev and not Laravel Sail?

Despite that I am mostly working on Laravel projects, I prefer to use ddev because it is not limited to Laravel rather than being universal for web development. With it you can run almost anything. E.g. sometimes I need to spin up a wordpress, which is just a piece of cake with ddev. Having to learn one tool instead of two or more, already validates my choice.

How to get started with ddev

If you don't have docker installed, do so by following these steps.
Afterwards, continue with the docker post-installation steps.
Finally, head to the ddev installation manual and take all the required steps.
Verify your installation with ddev -v.

2. Add ddev to an (existing) project

To run any (existing) project with ddev, just head to the projects root-directory and type ddev config which starts the initialization process. It asks you for some specifics. Afterwards you can start the container by typing ddev start. You should be able to reach the project in your browser.

How to configure xDebug to work with ddev

Configure xDebug to work with ddev and PhpStorm

To make xDebug in PhpStorm work, you have to set path-mappings in the project debug settings. For example, all my project live in the path ~/Sites/. For a project with ddev, you have to add a path mapping from ~/Sites/laravel-tinker/ to /var/www/html.
Go to Run > Edit Configurations and Add a new Configuration. Here is a screenshot of a working configuration. 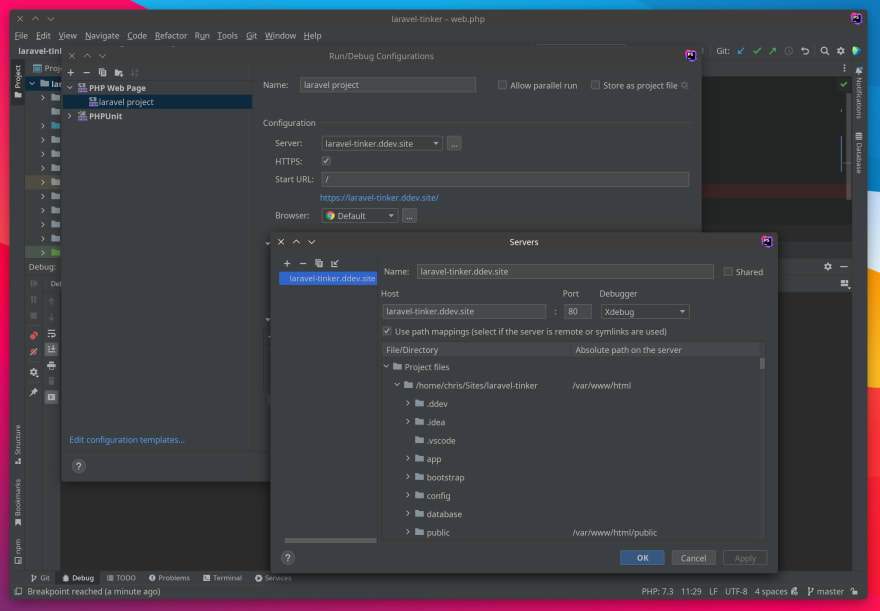 Configure xdebug to work with ddev and VsCode

The setup process for VSCode is very easy. Go to the ddev documentation and download the provided config snippet.
If your're having troubles, check the ddev and xdebug version. From ddev v1.19.0 the default port for xdebug to listen on is 9003.

ddev Cheatsheet: The most important commands

For my daily work, I found these commands as my most-used one. You can check out even more commands here.

Add ddev to a project

Get information about the container, like URLs and local credentials

When you change a PHP version or MySql version, you have to rebuild the container.

Starts a shell session in the container. Requires you to authenticate if your key is password protected. Useful if the container needs to access remote resources, e.g. when you're running a deployment.

(Laravel only) gives direct access to the Laravel artisan CLI

Execute any command inside the container, example:

How to define a custom command

ddev makes it easy for you to define custom commands. For almost every project I work on, I use a custom command called "provision" for set-up instructions. In here, all steps needed to set up the project are bundled.
Another use-case for a custom command:

Define a custom service, or how I call it: Enable two projects to communicate

Okay, until here, all the stuff was pretty basic. Let's tackle something more interesting. Say, we have multiple projects which we're working on, e.g. an API service that we need to call from another app.
You can just start both projects with ddev and work on them. But by default, they can't reach each other. For that, we have to use custom services and define the address where each project will be exposed to. Read about this feature in the ddev documentation.

To make a project accessible for other projects, define a yaml-file like this:

That's it, folks.
Leave me a comment and maybe questions and I'll try to help :)
Hope you find this useful!

How to Handle an External API Call Error in Workflows

Pre Signed URL in less than 5 minutes on Amazon S3

By Using FLIP we can Animating HTML Elements

Once suspended, crslp will not be able to comment or publish posts until their suspension is removed.

Once unsuspended, crslp will be able to comment and publish posts again.

Once unpublished, all posts by crslp will become hidden and only accessible to themselves.

If crslp is not suspended, they can still re-publish their posts from their dashboard.

Once unpublished, this post will become invisible to the public and only accessible to Chris Wolf.

Thanks for keeping DEV Community safe. Here is what you can do to flag crslp:

Unflagging crslp will restore default visibility to their posts.