After creating a React component and testing it, you still need to see what it looks like. But you may not have a view or

parent component ready to render it with.

In my previous article I created a redux connected UserListContainer that fetched users from a remote source. I also created a UserList presentational component to render the fetched users.

Additionally I generated jest snapshots for our

Lastly I used reusable data or fixtures in my tests.

What if you simply want to see what UserList looks like before adding it anywhere else in your app temporarily?

This is where Storybook provides a really practical solution. Storybook lets you view your components in isolation. So we could see our UserList with some sample users.

In this article I will do the following:

If you want to follow along do the following to checkout this blog’s code example “start” branch:

To get the completed repo

Next lets add Storybook to our project. In the root of the project run getstorybook.

In our package.json file in the scripts section we should see the following has been added:

Run yarn storybook and then go to http://localhost:9009 in your browser. You should see the following: 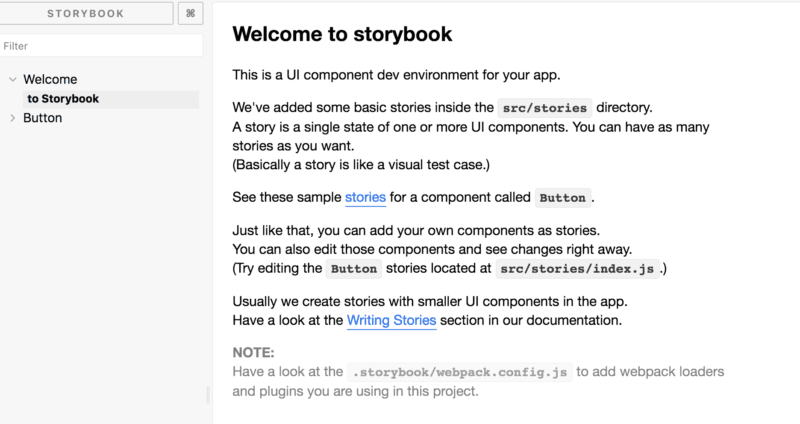 Let’s add a UserList story when we have users passed into the component. We can use the same fixture file from our

we imported in __test__ /components/UserList.test.jsx

We also will need to update our src/stories/index.js file to require our new story. Let’s remove the Welcome story and only load our new UserList story.

The Storybook web page should auto reload and we should see:

Instead of generating our snapshots with our tests we can also generate them with what our stories render. It’s arugably preferable because you are capturing a component based on what it looks like and not simply what it’s programitic structure is. To do that let’s add StoryShots.

Next we create a test to run Storyshots

Next run our tests and a new snapshot will be created in our __tests__ / __snapshots__ directory. At this point you could delete the original snapshot for the UserStory component since it renders an identical structure.

Storybook is a great way to view your components in an isolated sandbox. With Storyshots that same view can generate a snapshot test whenever you run your test suite.

I love writing web and mobile apps with Ruby and Javascript. I also like donuts and working out. I think I like donuts more...

How to identify the different forms of nested code and remove them.

David Moore
@davidimoore
I love writing web and mobile apps with Ruby and Javascript. I also like donuts and working out. I think I like donuts more...
work
Owner at Me
location
San Francisco CA
education
Bachelors
joined
Jul 28, 2018
More from @davidimoore
Using fixtures for testing a React/Redux app (with Jest & Enzyme)
#jest #react #redux