NB: Henceforth when I libraries I am referring to libraries/frameworks

Web Components were originally introduced in 2011 and browsers started implementing them much later.

What are Web Components?

Web components are a set of web APIs that allow developers to make encapsulated components that have their own set of functions and styling.

Web components are made up of

For this article I will be focusing on Custom Elements.

The need for Custom Elements

HTML provides a number of tags that have been serving the web well but the issue comes in when you try to get a consistent look and feel for various HTML tags. CSS tries to solve this by having a global style sheet that houses all the UI styles, however, this gets very difficult to manage with multiple developers since most developers would end up writing styles at the bottom of CSS files which makes it difficult to manage the styling.

To address this various frameworks and libraries have come up such as React and VueJS that let you encapsulate/scope styles. This solution of course works well when you have the freedom of importing libraries but what if you would like to achieve the same without using a particular library or framework. This is where Custom Elements in. As a PoC lets look at how an ecommerce front-end would look like with Custom Elements . 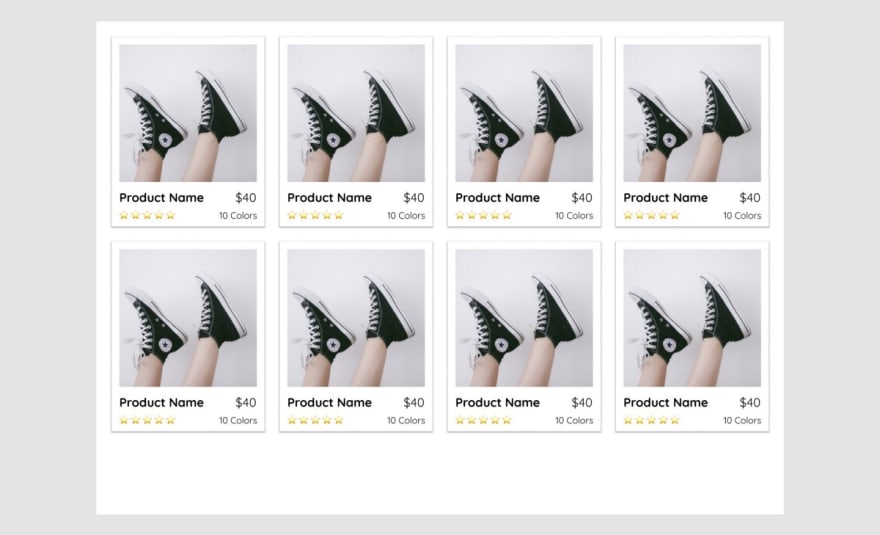 Very simple design of an e-commerce store that we will be implementing to figure out how Custom Elements work.

We have tried as much as possible to provide semantic meaning to the markup but there are places that the tag chosen doesn’t make sense. If a different developer was to continue this project they would would probably use different mark up, e.g. instead of using a p tag for the price they could use a div , this won’t cause any issues in styling since we are using the classes to do the styling but it does make our codebase very inconsistent, therefore, harder to manage.

would ensure that any developer creating a new shop page would have a consistent way of describing the elements. There is an added advantage of making our code base slightly more readable.

As you can see from the Pen above both implementations look exactly the same to the end-user, but the below one has a more consistent codebase with less chances of a different developer changing markup in a different page. This also makes the code reusable across pages and even sites.

The way JS is structured you will need to declare the implementation class before trying to register the custom element.

The implementation class extends the HTMLElement class and as such inherits all the functions and events that a normal HTML element would have. Within the new class we only require to provide the constructor which starts by calling the super() function.

Within the constructor you would create the HTML elements that are required for the implementation of the custom element. This code can be seen within the CodePen above.

Creating custom elements really helps have consistent and reusable code for web applications. This also lets you hide some of the inner workings which let developers who are not very familiar with front-end development still write front-end code.

How to fix "SyntaxError: cannot assign to expression here" in Python

How to fix "SyntaxError: ‘continue’ not properly in loop" in Python

Davinderpal Singh Rehal
A full stack engineer looking to get more people interested in programming and specifically get more Sikh girls interested in how to program. Writing at http://davi.codes
Taking on the JavaScriptmas Challenge Moving from Apache2 to Nginx Webserver
#nginx #php #apache #webserver

Once suspended, davinderpalrehal will not be able to comment or publish posts until their suspension is removed.

Once unsuspended, davinderpalrehal will be able to comment and publish posts again.

Once unpublished, all posts by davinderpalrehal will become hidden and only accessible to themselves.

If davinderpalrehal is not suspended, they can still re-publish their posts from their dashboard.

Once unpublished, this post will become invisible to the public and only accessible to Davinderpal Singh Rehal.

Thanks for keeping DEV Community 👩‍💻👨‍💻 safe. Here is what you can do to flag davinderpalrehal:

Unflagging davinderpalrehal will restore default visibility to their posts.