For the last few months, I've been building v2 of my side project called JustContribute. It's an app that allows you to find open, unassigned issues with newcomers welcoming labels like "good first issue" or "first timers only". You can search by programming language and popularity of the issue (number of interactions with an issue).

You can read more about tech stack and motivation in the first post. 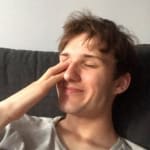 I rewrote the whole codebase. The v1 was made by me in 2 days because I was so excited about the idea, but it definitely has a reflection of the code quality. I stayed with React but I made my components much more clear, readable, and reusable. What's more, I used flow js for data types to make the code more maintainable and less buggy.

The whole backend concept was rewritten too. I no longer hit directly Github API in order to very stick limit rates. Instead of that, I made a cron function that runs every day, fetches all the issues, and stores them in Firestore. Thank's to that users communicate with my database instead of hitting GH API dozens of times every hour.

I redesigned UI using Figma. I feel like dark mode fits better to developers' habits and it looks pretty neat. I'm not a designer so I can't say a lot about designing process, because it wasn't very sophisticated. I sat down one weekend, made a design, and thought "Yeah, might be" and that's it. Hope you like it.

I hope you like the changes and use JC to find and join cool open-source projects. Let me know in the comments or on Twitter @dominikilnicki what you guys think about the idea and the execution. Happy Hacktober fest!

Once suspended, dominikilnicki will not be able to comment or publish posts until their suspension is removed.

Once unsuspended, dominikilnicki will be able to comment and publish posts again.

Once unpublished, all posts by dominikilnicki will become hidden and only accessible to themselves.

If dominikilnicki is not suspended, they can still re-publish their posts from their dashboard.

Once unpublished, this post will become invisible to the public and only accessible to Dominik Ilnicki.

Thanks for keeping DEV Community 👩‍💻👨‍💻 safe. Here is what you can do to flag dominikilnicki:

Unflagging dominikilnicki will restore default visibility to their posts.