Kitty is a super-fast, customizable, and GPU based terminal emulator. I recently switched over to Kitty from iTerm, and I could not be more satisfied. However, Kitty's speed is not the only great thing about it; in fact, Kitty has built-in support for tmux-like sessions and windows, allowing you to create powerful setups with no extra tools!

One of the best features about Kitty are startup sessions. Sessions allow you to create one or more tabs on startup (or with the kitty --session command) and customize each tab with a unique terminal configuration. For example, my current startup.conf looks like this:

which sets up two tabs when I launch Kitty: the first is a Reason native project (in particular, tailwind-ppx) and the second is a new tab that I can use for whatever I need to. This configuration looks like this: 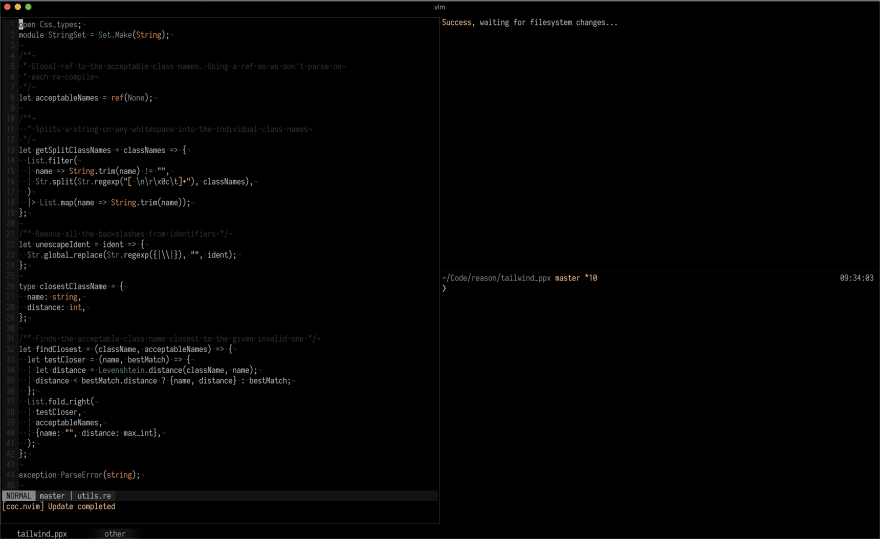 Normal startup sessions are great if you've hard-coded the desired working directory for the session into the .conf file, but what about when you want to start a session and you don't know the directory? With a little help from zsh, we can implement what I'm calling "dynamic" Kitty sessions. Essentially, we're going to create a command that allows you to launch a new Kitty session given the path to a project. For example,

As you can start to see, there's a lot of customization we can do in the middle, but hopefully you get the basics of what we're trying to do.

Let's start by defining our session. Personally, I've
created one session file per type of project I work with (Reason native, BuckleScript, JavaScript, etc.), and it's worked well for me thus far.

Note that you can put your session files wherever you'd like, so long as you properly provide the path in your .zshrc (see the section on aliases below)

For example, here's my session for a Reason native project:

Notice the PROJECT_DIR environment variable above --- this variable will be set automatically before Kitty is launched, so stay tuned.

Now that we've created the session configuration files, we'll move on to creating shortcuts in zsh so instead of doing this:

we can just do

Since these shortcuts will take in an argument (namely, the path to a project), all we need to do is add a function in our .zshrc that will act as our alias.

And that's it! Now you can launch a new Kitty session based on the type of project, without hard-coding all the file paths of your projects into separate .conf files beforehand.

Hopefully this tutorial/intro was useful! If you're curious in learning more, I'd check out the Kitty docs. In addition, I've published my personal Kitty setup, along with the rest of my dotfiles, on GitHub. Cheers!

How to keep your units testable in JavaScript

Once suspended, dylanirlbeck will not be able to comment or publish posts until their suspension is removed.

Once unsuspended, dylanirlbeck will be able to comment and publish posts again.

Once unpublished, all posts by dylanirlbeck will become hidden and only accessible to themselves.

If dylanirlbeck is not suspended, they can still re-publish their posts from their dashboard.

Once unpublished, this post will become invisible to the public and only accessible to Dylan Irlbeck .

Thanks for keeping DEV Community 👩‍💻👨‍💻 safe. Here is what you can do to flag dylanirlbeck:

Unflagging dylanirlbeck will restore default visibility to their posts.